Wire, a sweet but extremely introverted horse, arrived at Best Friends full of insecurity. But that’s no problem because through positive training, she’s gaining confidence and some useful new skills, something we specialize in at the Sanctuary’s area for horses — appropriately named Horse Haven.

Type “how to break a horse to ride” into a Google search and you’ll find plenty of quick-fix methods to help you succeed on that first ride or overcome previous failures. But the best horse training methods are not those that use dominance and force to get a horse to comply (like horse breaking). The most successful methods allow time for a horse to build a trusting and cooperative relationship with her handler. And that’s what’s happening with Wire and her trainers at Horse Haven.

Help for a frightened horse 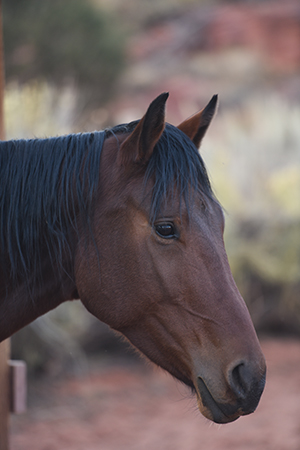 Wire is an introvert, which means that her lack of confidence can cause her to freeze and get stuck both physically and mentally. While it's part of the natural "fight, flight or freeze" response, freezing doesn’t release the pressure. Instead, it builds until, at some point, it gets to be too much and causes Wire to explode by bucking or bolting.

Wire had never learned to feel comfortable with someone on her back. She’d tense up and refuse to move forward when someone was sitting in the saddle. That refusal to move, no doubt, prompted the rider to put more pressure on her to go forward. But when Wire couldn't take any more pressure, she'd explode and buck the rider off. That’s why she was brought to Best Friends for help.

Many people want to adopt a horse they can ride. Since four-year-old Wire is strong and healthy enough to be ridden, Horse Haven trainers are starting from scratch with her. In this case, retraining a horse to ride requires helping Wire learn the vital coping skill of how to relax, get herself "unstuck" and move forward. This work had to happen on the ground before anyone tried getting in the saddle.

Getting a horse used to a saddle

Through Parelli Natural Horsemanship games, including the friendly game, Horse Haven trainer Linda Alvey is retraining sweet Wire. The horse is learning to read Linda’s body language and intentions so that when Linda asks her to do something, she can choose the best response.

When Wire willingly does what Linda asks — say, walking in a circle around her trainer on a lead line — she is rewarded. Sometimes the reward is a tasty horse cookie, and other times it’s something subtle, like Linda releasing slight pressure on a rein.

If Wire would ever accept a rider again, she first had to learn how to accept a saddle. The sensitive horse still has rub marks on her body from an ill-fitting saddle. So, it’s understandable that, at first, just wearing a saddle would cause her to tense up, brace and buck.

“Linda spent a lot of time getting her to relax with the saddle and learn how to move while wearing it,” explains Jen Reid, manager of Horse Haven. “That time spent teaching her how to comfortably wear and move forward with the saddle is invaluable, because it’s the same process that she'll use to get her to accept the human as a rider.”

The saddle training paid off during a recent training session when Wire finally wore it effortlessly. It was an excellent start, and Linda hoped that the session could end with climbing up into Wire’s saddle for the very first time. But whether Wire and her trainer could take things to the next level would depend entirely on how much comfort and trust they were willing to place in each other.

Using a halter and reins, Linda coached Wire in something called “lateral flexion,” which simply means bending her head all the way around to her side in whichever direction Linda suggests.

“The reasoning behind using lateral flexion is that a braced and tense horse won't readily bend its neck to the side,” Jen explains. “To do that the horse has to physically relax, which leads to more mental relaxation. It's also a lot harder for the horse to buck, rear or run off with her head turned to the side, so it can be part of an emergency stop and dismount if needed.”

At first, Wire resists slightly when Linda tries to coax her nose around to the side. But, holding the rein in two fingers, Linda keeps just the lightest pressure on it until Wire understands what she wants her to do and softens her body. Her head comes around, and she’s rewarded with a cookie and a happy “Good girl!” 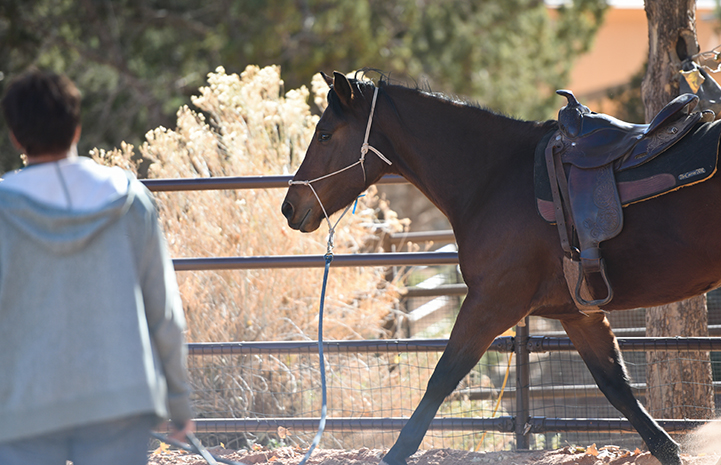 After some more practice, Wire exhales deeply and begins licking and chewing, which are all signs of relaxation. Soon, Wire and Linda are comfortable enough with each other for Linda to try climbing up into the saddle for the first time. Instead of doing that in one fell swoop, Linda moves slowly, checking to make sure that Wire is OK each step of the way.

First, Linda climbs onto a block in the arena so that she is standing taller than Wire. This way, Wire can see that nothing bad will happen when her trainer is above her. Then, Linda places one foot in the stirrup and puts some weight on it. Next, she stands in the stirrup and leans her body over the saddle. Finally, Linda climbs up and sits, not asking Wire to do anything except to feel her weight and her calm, low energy, and to be at ease with it.

Wire is then allowed to set the pace and move slightly forward or to the side as she pleases. As the session progresses, Linda asks her for small things — a step to the left or the right, or a few steps forward, making sure it is still Wire’s choice to cooperate. In future training sessions, Linda will up the ante by asking Wire to do more as she gains confidence.

For now, this slow and subtle dance between a once-terrified horse and a trainer who inspires confidence in her, has laid the foundation for all of Wire’s future successes. The young horse is changing slowly with each training session. Someday, she is likely to be someone’s dream horse. And she will get there — one small step and sign of trust at a time. 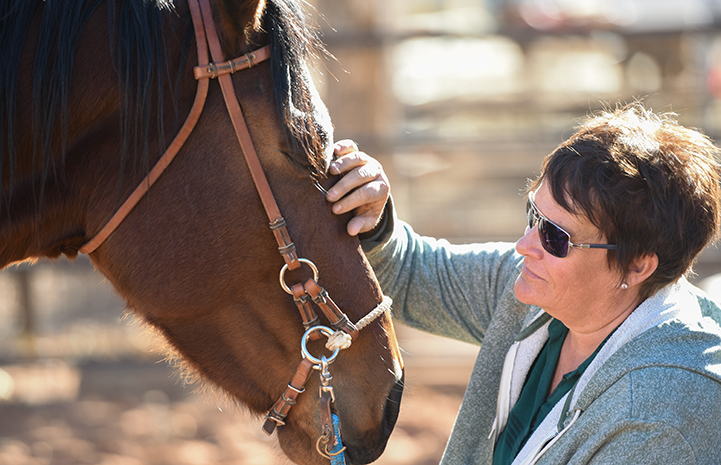