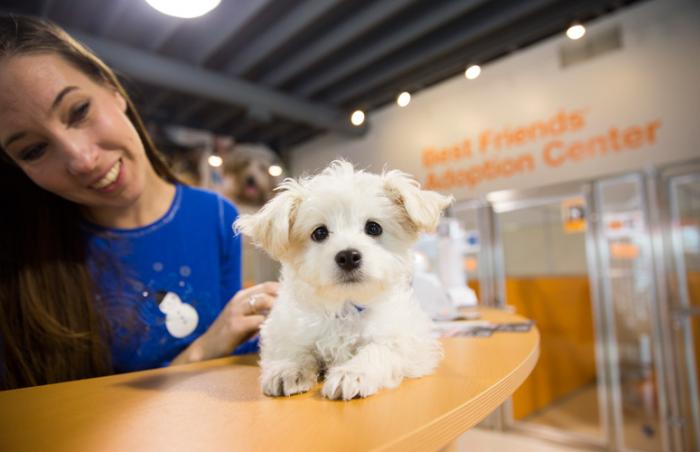 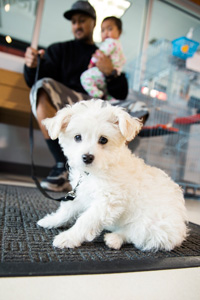 Looking for a “teacup” puppy? You may have heard of them — dogs for sale weighing less than four pounds fully grown. Elizabeth Oreck, national manager of Best Friends’ puppy mill initiatives, sums up the teacup puppy phenomenon quite simply: “There’s really no such thing as a teacup breed of puppy.”

Elizabeth equates the level of disappointment for folks who buy teacup puppies with that of a similarly misnamed fad, teacup pigs. “People buy these animals labeled as ‘teacup’ and think they’re getting a miniature,” says Elizabeth. “But the reality is when the young puppies grow into adulthood, they’re often much bigger than what the people thought they were buying — if they’re healthy enough to grow up at all.”

Elizabeth says that the term “teacup” is really just a marketing ploy to sell more puppies. The majority of teacup puppy purchases are from breeders selling online, where stock images show darling puppies posed in a teacup. People imagine themselves toting around a Lilliputian pet in a tiny purse. “The pet industry, fueled by greed, creates a demand for a pet that can only be produced by unscrupulous breeders,” Elizabeth says.

It’s not only a marketing ploy, it’s a consumer fraud issue. “Teacup puppies are much more expensive than other puppies,” Elizabeth says. “There are no dog registries, including the American Kennel Club, that recognize teacup dogs.”

The tragic truth about mini puppies

Another problem is that puppies for sale with a teacup prefix are often unhealthy. They’re usually much younger than advertised, or they’re undersized puppies resulting from the breeding of runts to runts. Either practice does a disservice to people and pets. Puppies separated too early from their mothers, as well as the offspring of two runts, are often plagued with a lifetime of health problems, including fragile bones and fragile health, says Elizabeth. “If those puppies even make it to adulthood, they can cost people thousands of dollars in medical expenses.”

The fact is, people who buy a teacup puppy are often disappointed. “Many of the dogs who are labeled as ‘teacup’ are already small-breed dogs, like Yorkshire terriers,” says Elizabeth. “False advertising leads people to believe they’re getting an even smaller version of the breed, but then the teacup puppy often grows up to become a standard-sized Yorkie.” 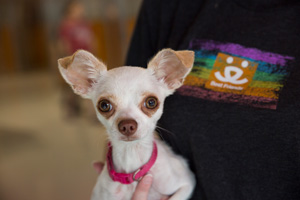 For folks looking to adopt a small dog, Chihuahuas are the smallest breed recognized by the AKC, and they’re available from animal shelters and rescue groups around the country. “There are toy breeds available right now at your local shelter,” says Elizabeth. “Chihuahuas are being transported across the country because Los Angeles’ shelters are filled with them. Nobody needs to shell out a lot of money for a teacup puppy when so many toy-sized dogs are dying in animal shelters.”

Dog lovers who want a small dog can look on Petfinder.com or do a search online for breed rescue groups, where tiny dogs of every age, shape, color and temperament are ready for adoption. “We want to help people avoid making the potentially heartbreaking and expensive mistake of falling for what is basically deceptive advertising,” says Elizabeth. “No one is going to end up with an adult dog who fits inside a teacup. You’re better off adopting a dog and saving your teacups for tea."

Through Best Friends' puppy mill initiatives, we are educating consumers about puppy mills, helping to create and lobby for humane legislation, and working with pet stores to offer shelter pets for adoption instead of selling mill-bred pets. Together, we're making an impact and saving lives. Join us and help bring about a time when every dog can feel safe, happy and loved.