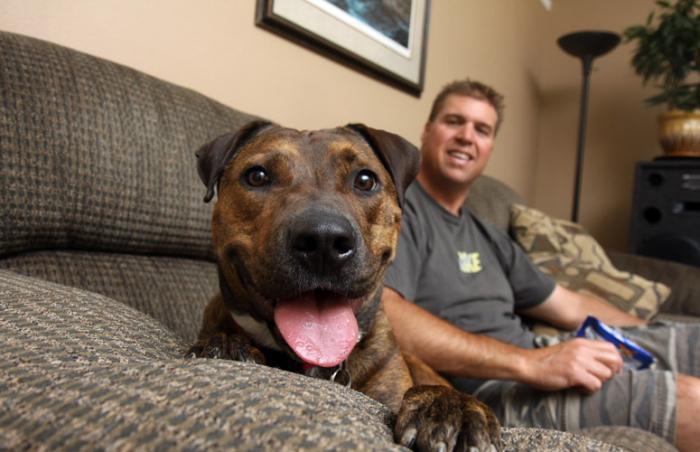 "Politics is not a spectator sport" is the credo of Best Friends Animal Society senior legislative attorney Ledy VanKavage, and three recent victories around the country on behalf of pit bull terriers certainly prove that to be true.

One of the biggest wins was the recent repeal of a proposed resolution by the Broward County commissioners to override a statewide law that forbids communities from discriminating against dogs based on breed or appearance. Vice Mayor Barbara Sharief was taking the first step toward enacting breed-discriminatory legislation when it was pulled. Florida is one of 13 states that prohibits breed discrimination.

According to Ledy, "This is America. Responsible dog owners should be allowed to own whatever type of dog they choose, regardless of appearance. Reckless owners should be prevented from owning any pets." When the anti-BDL statewide legislation was put on the books, a few areas grandfathered in their breed-discriminatory laws, including Miami-Dade County. These laws have not enhanced public safety and are a huge waste of tax dollars and lives. "We want safe communities for people and pets, and breed discrimination fails to achieve that," says Ledy.

Ultimately, the Broward resolution failed to pass. Best Friends staffer Wendy Kaplan was on the ground testifying against the ill-conceived legislation. Further opposition to the unfair legislation included 60 animal advocates who showed up in person and a press release from Best Friends that included a statement from former Miami Marlins pitcher Mark Buehrle and his wife, Jamie, who had recently moved to Broward County since their family was not able to live in Miami-Dade because of their pit bull terrier family member, Slater. Another factor in getting the proposed legislation pulled was the nearly 2,000 pieces of correspondence sent to the county commissioners by our supporters in Broward County through our Voices for No More Homeless Pets.

"We want safe communities," shares Ledy. "We want communities to be protected against dangerous dogs - and we want abused dogs to be protected from reckless owners. Many studies, along with the experience of Best Friends Animal Society, show that breed-discriminatory laws are ineffective and result in the needless death of countless pets. We are thrilled that Broward decided to forego this route and save their taxpayers money while keeping loving and responsible families together."

When New Orleans was looking to revamp their animal control laws, they originally made some major missteps. Pit bull terrier advocate and author Ken Foster, founder of the Sula Foundation, reached out to Best Friends right away. Among the alarmingly bad directions being proposed under the new laws was the stigmatization of fight-bust victims. Dogs rescued from dog-fighting situations would not be permitted to be fostered or adopted by a home that included another pet or children.

"Our legal team, including Laura Handzel, helped draft better language to treat the canine victims as individuals," says Ledy. "The laws that were passed included getting fight-bust dogs evaluated and placed based on the evaluation, and, after 18 months, the dogs are no longer restricted to abide by the evaluator's recommendations. Best Friends' Laura Nirenberg also worked on further provisions to the laws to ensure that the community cats of New Orleans were treated more fairly as well."

Best Friends sent out an action alert that generated dozens of letters and emails to the elected officials of New Orleans, and by joining forces with the Sula Foundation, BAD RAP, and LASPCA, New Orleans is on its way to becoming a safe and humane community.

On February 6, Rhode Island saw two ill-fated bills introduced: Senate Bill 178 and House Bill 5287. Both bills called for a statewide regulation of pit bull terrier dogs, which included an automatic "dangerous" designation. This would have meant a domino effect of disaster levied on pit bull terriers, none of which would have kept any community in Rhode Island safer.

Best Friends sent out an action alert that galvanized almost 1,000 animal-loving citizens to speak out on behalf of their state's pit bull terriers.

"Last year, we saw Ohio, the only state that stigmatized 'pit bulls,' repeal their 'vicious' dog designation, and we didn't want Rhode Island to enact such an arbitrary provision that would do nothing to enhance public safety and waste lives and tax dollars. After more than 20 years, the Buckeye State wasn't safer with their breed-discriminatory provision, and the designation was repealed. Thankfully, Rhode Island's lawmakers listened to their constituents and pulled the bills before any pets were impacted," enthuses Ledy.

The sustainable strides in communities across the country are being made through legislation. Let your elected officials know your opinions. Join the Best Friends Legislative Action Center today and start receiving pro-animal action alerts.