Guinea pigs tend to not stay very long at Best Friends before someone falls in love and adopts them. After all, they’re incredibly cute, often cuddly, and unabashed at showing their excitement at the world around them. Come on, really, how many pets squeal with delight every single time the refrigerator opens? 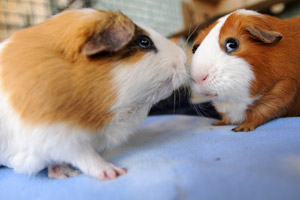 Bert, Ernie and Elmo, three new guinea pigs at Best Friends, have only been around a short time and are already winning friends.

Plus, Elmo is the first guinea pig at the Sanctuary to go on a sleepover. His adventures were such a success that a whole new sleepover program opened up for all guinea pigs at Best Friends.

Elmo’s sleepover took place because of a special friend he met a few weeks back. Isabela Przygodzki from Bethesda, Maryland, is currently at Best Friends as part of an internship program for individuals who are thinking about a career in animal welfare. Isabela chose to work with Elmo as a project animal, and the two of them quickly became close. When she asked if she could take him on a sleepover, the rabbit staffers agreed it was a fabulous idea. 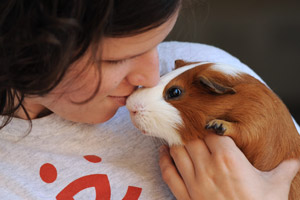 During their first sleepover, Elmo acted a little shy at first, even trying to hide from another intern in the room. Yet Isabela spent as much time with Elmo as possible, helping him realize that sleepovers, as well as humans, can be fun. Holding him on her lap and petting him for a full hour certainly went a long way in that regard.

When she took him on his second sleepover, Elmo did fantastic when not just one but several other interns came for a visit. He didn’t try to hide at all. "It ended up going really well," Isabela says. Clearly, the sleepovers were a big help. He also learned to love car rides, making the same excitable squeaking sounds on the drive over that most guineas make when the fridge door opens.

As for Bert and Ernie, they’re a father-and-son pair who gets along great. Well, OK, sometimes Bert wouldn’t mind some peace and quiet from his rambunctious son, Ernie. Yet, overall, they’re terrific company for one another. "They like hanging out together," says Michele. 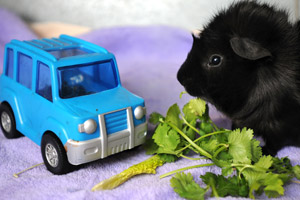 Ernie is the rambunctious son.

If previous history with guinea pigs at the Sanctuary proves anything, these three will find happy endings sooner rather than later.

Of course, Elmo’s influence will last much longer than that. The new guinea pig sleepover program is sure to be a big hit for many years to come.