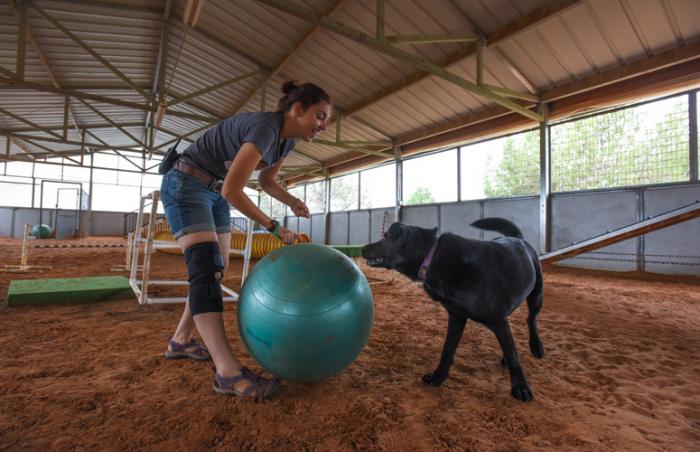 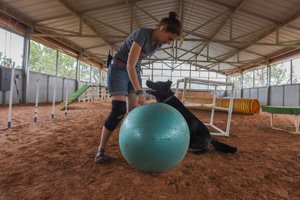 Whenever Dogtown trainer Ashley Atkinson moves, a striking black shepherd mix named Levi moves with her, carefully positioning his body so that no matter where she turns, he’s always directly in front of her. It’s as though the two are magnets drawn to one another. When Ashley remains still, Levi sits and watches her intently with his gorgeous gold eyes, trying to anticipate her next move.

What’s going on? Levi is learning to play treibball (pronounced “try-ball”), a game that requires close communication between a dog and his handler. Trying his paw at treibball has turned out to be Levi’s saving grace. It has helped him come a long way from some of the behaviors that caused him trouble in the past.

Treibball to the rescue

After Levi lost his home, the shelter that took him in set him up in a prison program that involves inmates spending a lot of time teaching basic manners to dogs. Because Levi was a star pupil, he graduated from that program and found a new home. But then his new family discovered that without a “job” to keep him busy, Levi could get himself in trouble. He started guarding his family and that, understandably, scared guests and visitors. Levi’s not aggressive; he just needs a job to do. And here at the Sanctuary, he’s found the perfect one, in treibball.

The Sanctuary gives smart, active dogs like Levi lots of opportunities to learn new things that are essential to their happiness. While some dogs love nothing more than to lounge around and take lots of naps, others beg for more to do. Dogtown trainers teach those dogs agility and nose work (a sport where dogs learn to sniff out certain scents). However, they’re trying something entirely different — and just as much fun — with Levi.

Since Levi and Ashley have been working together for a while on treibball, he’s getting pretty good at it. Levi’s big ears perk up and a smile crosses his face when Ashley sets a giant ball between them. That’s the cue that he’s supposed to do something. And what he’s supposed to do is push the ball around with his nose or shoulder. It’s easy to see why the game is sometimes called urban herding. Levi’s “sheep” is the big yoga ball.

When Ashley first sets the ball down, Levi, in his excitement, paws at the ball and then looks expectantly at Ashley, who waits quietly for him to try something else. The game is based on positive reinforcement, so Ashley waits for Levi to do what she’s asked, and when he figures it out, he gets a treat.

A winner in our book 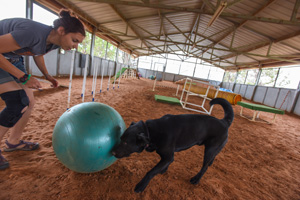 In Levi’s first few training sessions, he learned that pushing the ball was what Ashley wanted, so now he gives the ball a firm shove with his nose. That results in an immediate click from the clicker in Ashley’s hand, plus a yummy treat.

Once Levi perfects his push, Ashley will move farther and farther away from him until she’s standing in a clearly marked goal area. Then she will be able to direct Levi to “herd” between one and eight balls over to her within a designated amount of time. But that’s further down the road.

Levi may not yet be ready to win a treibball competition, but that’s OK, because winning isn’t really what his training is about anyway. He’s happiest when he can channel all that drive and intelligence into something positive. Even when there’s no official prize, Levi is a winner all on his own. When he plays the game, it brings out his very best.

To help more animals like Levi get the royal treatment they deserve, make a donation to Best Friends.