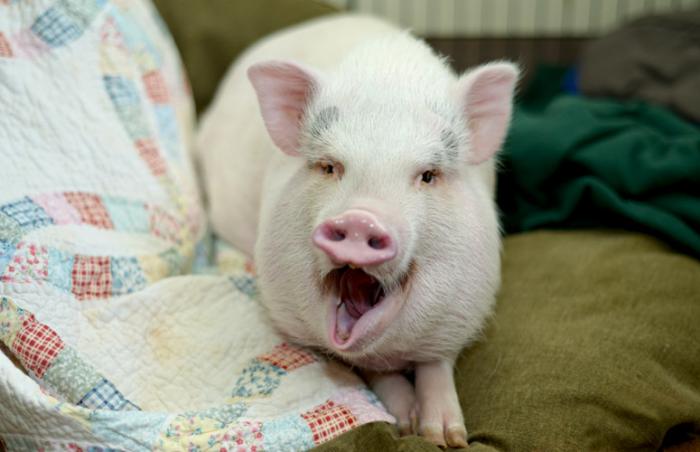 The truth about teacup pigs

What could be cuter than a pig who can fit in a teacup, or in a couture purse? In recent years, "teacup" pigs (also called "mini" or "micro" pigs) have become popular on television shows and the Internet. In one YouTube video, a teacup pig named Hamlet climbs down a flight of stairs and lands in a bowl of oatmeal, which he then devours.

Pigs like Hamlet have become the latest pet craze. Not only are they absolutely adorable, but they are also very clean and intelligent animals. Some breeders claim that they are easier to care for than dogs, and that certain teacup pigs will only be 10 pounds in adulthood. That's about the size of a miniature Dachshund.

The catch? There really is no such thing as a teacup pig. So-called teacups are actually potbellied pigs who are either underfed so that their growth is stunted, or who are sold under false pretenses. Because pigs can breed when they are as young as three months old, the parents of a piglet may be piglets themselves; therefore, their size is not an accurate measure of how large their offspring will be in adulthood. Potbellied pigs can grow until they are five years old and reach well over 100 pounds.

Rosie and Joanna the pigs 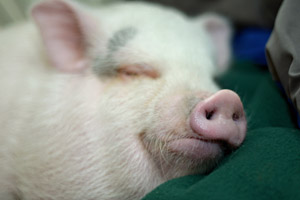 One well-meaning couple paid several thousand dollars for a sweet little piglet named Rosie. Although they doted on her, and followed the breeder's feeding instructions faithfully, Rosie became malnourished. As a result, her bone density is extremely low, which makes her extremely prone to fractures. Knowing that Rosie would need specialized medical care for the rest of her life, and wanting to give her a chance to just be a pig and have access to more of the resources she needed, the couple surrendered her.

Rosie's caregiver, Adria Johnson, adds that underfed pigs also suffer from weak immune systems, sensitive skin, and hoof problems. And, while the average life expectancy for a potbellied pig is 20 years, most teacup pigs don't make it past five.

Like Rosie, two-year-old Joanna weighs around 50 pounds, which is half the size she should be (almost 100 pounds). But, for such a little pig, Joanna sure could make a big mess in her people's living room. The couple who bought her loved her very much, but they ended up surrendering her because of her behavior.

Though pigs can do fine as house pets, they need to interact with other pigs and have access to the outdoors. In nature, pigs live in communities, called sounders, so domesticated pigs do best if they have at least one piggy pal. Additionally, they have natural rooting and digging behaviors. If they can't fulfill these basic instincts, it can lead to a lot of destruction and frustration that, in turn, result in countless pigs losing their homes.

The truth about teacups 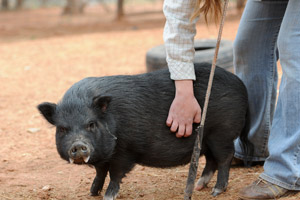 For Rosie and Joanna, there are happy endings. Rosie did a short stint at Best Friends before going to a wonderful foster home. And Joanna has been having a blast running around and digging in the dirt here at the Sanctuary. She'll get to make some piggy friends soon, and start doing some training too.

But the problem remains: Not enough people know the truth about "teacups," which are just starting to be mass-produced.

Research is a must for anyone considering adding potbellied pigs to their family, because providing them with proper nutrition, an appropriate living environment, and good veterinary care can be very expensive. And it's not so easy to find someone to pet-sit potbellied pigs while you go on vacation. But for those unable to resist a tiny pink snout and a pair of bright piggy eyes, adoption is the best option; there are thousands of pigs in rescues and sanctuaries looking for good homes.

Get more information about potbellied pigs.

See the adoptable pigs at the Sanctuary.