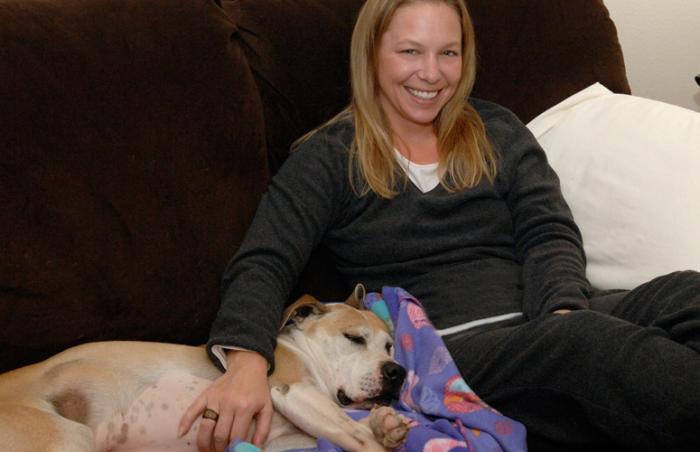 Not many people come to Best Friends and specifically request a challenging dog for a sleepover - sight unseen. However, Dianne Wiles is not your typical volunteer.

She's the development director for First Coast No More Homeless Pets (FCNMHP), a No More Homeless Pets Network partner based in Jacksonville, Florida, and she wanted her first-ever visit to the Sanctuary to be unforgettable. That wasn't difficult, as this trip was a surprise given to her by her husband, Nooney Ritacco, to mark her 40th birthday.

The couple volunteered at both Cat World and Dogtown, but without a doubt, Dianne's most memorable experience while at Best Friends was her time spent with Judge.

Spending the night with an adoptable dog

Despite her request for a "hard" dog, Judge was anything but a challenge. He couldn't be around other dogs, but aside from having to eat takeout pizza instead of dining out, having him spend the night with them wasn't even an inconvenience. 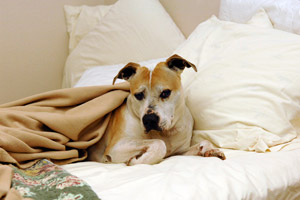 It's no wonder Judge is selective about his friends. Who could blame him after surviving the aftermath of Hurricane Katrina? It had been a while since he'd been on a sleepover, so he was a little shy at first. However, once he realized that he was among friends, he warmed right up.

"It was very rewarding to work with him and to break that barrier when he did get up and start wagging his tail, says Dianne. "He just turned into this lovebug." She was hooked, so Judge stayed all three nights with the couple.

They took lots of walks together, but bedtime was the best. Since evenings were chilly, Judge knew a good thing when he saw it, so he loved cuddling in bed.

"You could tuck him in and wrap him up in blankets and pillows, and he would just snuggle and grunt and snort," says Dianne. What a charmer!

She'd adopt Judge, but she already has dogs. However, nothing would make her happier than to find him a loving home.

Flying with an adopted cat to Florida 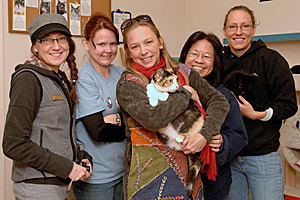 Dianne thought the Cat World staff must really love the work being done at FCNMHP because when she arrived to volunteer, they started jumping around and cheering, "Florida, Florida, Florida." Though true, they were actually excited to have someone heading back to the Sunshine State.

A woman from Daytona Beach had adopted Athena, but the little calico has feline leukemia, so couldn't fly cargo. Athena's adopter was visiting a town close to Jacksonville, so flight arrangements back with Dianne were made.

Though Athena started out a bit chatty on the car ride to the airport, she soon quieted down, and, according to Dianne, "didn't make a peep" on the plane. She says the transport was a "piece of cake" and was excited to have been a part of such a special delivery.

Now back in Jacksonville, Dianne continues her work to bring about a time of No More Homeless Pets. The efforts in Jacksonville have been on the cutting edge of animal advocacy for years.

FCNMHP is known for their spay/neuter clinic, which fixed 25,332 pets in 2012, and their Feral Freedom program has become a national model for vaccinating, fixing and returning free-roaming cats to their neighborhoods instead of taking them to the shelter to be killed. Add in their pet food bank, mega adoption events, and Target Zero Institute, FCNMHP's new program to teach their lifesaving models to other communities, and you have a true animal welfare powerhouse.

And it's working. Duval County, where FCNMHP is located, experienced its first-ever no-kill month in November 2012, obtaining a 92 percent save rate.

So, Dianne, keep up the great work on behalf of the animals in Jacksonville, but don't forget to come back to Best Friends. Judge has spread the word, and there's already a lineup of dogs hoping for a sleepover with you.