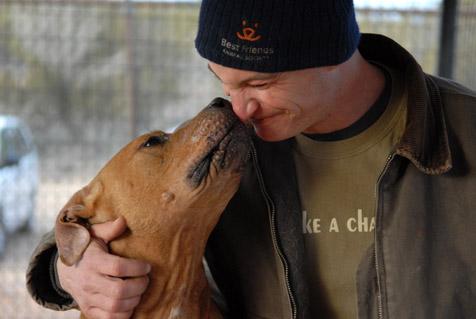 The adage "you can't judge a book by its cover" could not be truer when describing Lucas, one of the 22 former Michael Vick dogs who arrived at Best Friends Animal Sanctuary more than three years ago.

A pit-bull terrier with telltale battle scars and one of the toughest backgrounds imaginable, Lucas is one of the most popular of the Vicktory dogs (as they are now called).

The life of neglect the Vicktory dogs led before coming to the Sanctuary has caused some of them to have chronic medical issues. While their emotional and physical scars continue to heal, some of their more serious medical issues are not apparent to the naked eye.

Ten-year-old Lucas arrived at the Sanctuary with a condition called babesia, a blood parasite that can be passed between dogs through deep puncture wounds, like those inflicted during fighting. The condition can be managed with medication, but one of the side effects of babesia is anemia. When Lucas's anemia worsened, he was given a full checkup. Tests showed that he was having other complications in addition to anemia. After exhausting other methods of testing and to take a closer look at possible masses seen on ultrasound, he was scheduled for exploratory surgery. Late last week, several masses were removed from his enlarged spleen, which are being biopsied. While undergoing surgery, the veterinary team also took a biopsy of his liver which looked abnormal.

"Surgery went pretty smoothly," says Dr. Patti Iampietro, who performed the procedure. "Lucas is doing well." But, she adds, he's still in recovery and "not out of the woods yet."

Now in the midst of recovery, he is improving with the help of our medical staff and everyone who loves him. He has many friends across the Sanctuary and fans who have followed his story.

A new life for abused dogs

Life for sweet Lucas truly began the day he and the other 21 dogs landed in Angel Canyon, a world away from the horrific lives they once knew. Lucas, who was court-ordered to spend the rest of his days at Best Friends, is proof positive that dogs who have known only neglect and abuse can begin anew and be the loving companion animals they were born to be.

John Garcia, a trainer and manager at Dogtown, where canines live at the Sanctuary, first met Lucas when John traveled to the facility where the Michael Vick dogs were kept before moving on to rescue groups, including Best Friends.

"I was helping one of the employees there mix food one morning," John says. "[The employee] had mentioned that he had always been afraid of pitties from a fighting background, so he was terrified to hear he'd have to work with the Vick dogs."

But the caregiver's face lit up when he spoke about Lucas. "He told me it only takes one to change your views," John says. "This was an amazing thing to hear, that someone who was afraid of a certain breed had the courage to still work with [the] dogs. And to put it so simply — it brought tears to my eyes. This truly shows how dogs like Lucas have influenced people all over the world and how much animals in general can teach us."

Once at the Sanctuary, with patience, one-on-one training and 'round-the-clock care, the dogs, many of them frightened, gradually acclimated. Lucas, the consummate optimist, hit the ground running. He's done so well, in fact, that he spends part of his time in the offices hanging out with executive assistant Brenda Escher and chief executive officer Gregory Castle. At the end of the workday visits, he returns to Dogtown.

A few weeks after arriving in January 2008, the Vicktory dogs were introduced to the world at a news conference held on the Sanctuary grounds. Many of the dogs were shut down and scared because of their past. Not Lucas. He welcomed visitors with kisses, surprising national media with his resilience. As caregiver Carissa Hendrick said at the time, "He knows he's safe."

"I think Carissa was right that Lucas did feel safe here," says Dogtown manager Michelle Besmehn, "but I also think that Lucas is just a confident dog. It is part of his nature."

Lucas, simply put, is happy, and that is what Brenda says stands out the most for her.

"When some visitors come into the office and sit down, he welcomes them by jumping onto their laps and lavishing kisses on them," Brenda says. "That tells me that he's not the menacing, dangerous dog that far too many people feel his breed might be. He only wants to be loved. We all are better people for having had the experience of having him in our lives."

For Dr. Patti, his easy nature is also what has touched her: "The thing that stands out most to me about Lucas is his overflowing love of people. He is so kind and gentle despite what humans in the past have put him through. It really teaches a lesson in forgiveness and understanding that we humans should strive to equal."

Michelle agrees: "We can learn a lot from him. He has been a very happy dog despite his background and despite all of the ups and downs he has had medically."

Dr. Patti says, "It is always a rewarding feeling to help any animal, but helping those animals at Best Friends who have no one else, especially a dog like Lucas who came from such a horrific background, is especially fulfilling to be able to play a positive role in his health and happiness."

The clinic team continues to monitor his progress while waiting for the biopsy results. Updates on his condition will be shared as we know more. Brenda visited Lucas after his surgery and spent time just sitting with him. "He recognized me immediately, and I think he's the trooper we all know him to be," she says.

The gentle side of Lucas, despite his past, continues to inspire those who know and love him. "His joy for life and a can-do attitude are something we can all strive for," says John. "Lucas really does symbolize the American dog Despite a very difficult past, he is affectionate and forgiving. We are all pulling for him to get better."

Good news came in with the biopsy results! The masses found in Lucas' liver and spleen were not cancerous. His anemia that comes with having babesia will continue to be treated as it has been since he arrived at the Sanctuary.