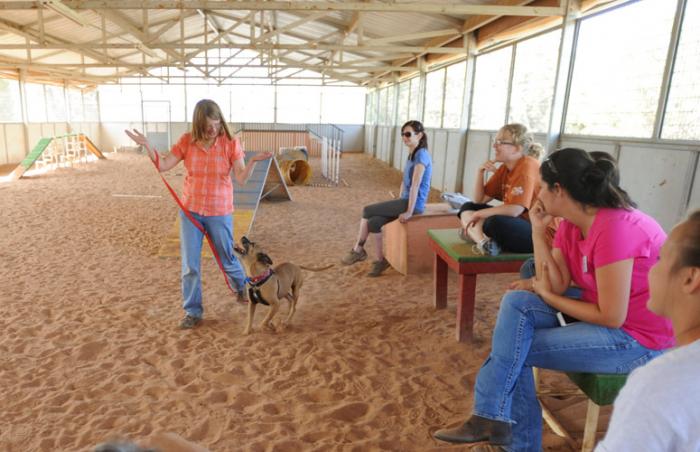 It goes without saying that the Vicktory dogs (the dogs rescued from NFL player Michael Vick's dog-fighting ring) have endured some dark days. But, for seven-year-old Ray, things have just gotten a whole lot brighter. He's following in the footsteps of Layla, the Vicktory dog who spent some time with the folks in Parrot Garden, passed her Canine Good Citizen (CGC) test, and "graduated" into a six-month foster-to-adopt situation in February of this year.

Due to a court order, some of the Vicktory dogs, including Ray, are required to pass the CGC test before they can be placed in adoptive homes. The 10-part test places dogs in some stressful situations to gauge how appropriately they react. For example, CGC evaluators require a dog to remain calm and polite while a "friendly stranger" greets their person. They must also demonstrate calmness in the face of distractions like a dropped chair or a rolling cart. And, perhaps most difficult for a dog rescued from the abuse of a fighting situation, he or she must show no "reactivity" or aggression whatsoever to other dogs. 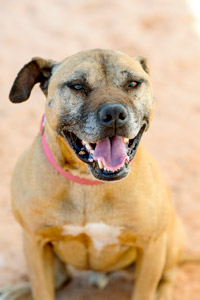 A life-changing hiatus for Ray

In the weeks leading up to Ray's test, his caregivers thought he might like to take a hiatus from Dogtown and spend some time in the offices of Parrot Garden. Why would a Vicktory dog (or any Dogtown resident) go to Parrot Garden? Sometimes, the high energy level in Dogtown can boost a dog's stress level. Although the feathered residents of Parrot Garden can be quite vocal, many dogs find the environment there much calmer and more relaxed. Certainly, this had been the case for Layla, who lived there for months before she was ready to ace her test.

But Ray didn't take to the environment at the Parrot Garden as well as Layla did. He seemed a bit stressed there, so his caregivers decided to move him back to Dogtown to keep his anxiety level down. Before he left, however, Ray did something that would change his life: He stole the heart of Parrot Garden manager Jacque Johnson. It was not just his adorable looks, but also his sweet and happy nature that got her attention. He particularly amused Jacque and her staff with his antics, which included jumping right up onto her desk.

Aside from giving him some space on her desk, Jacque has often said that Ray deserves a couch to lie on for the rest of his days. Perhaps she knew all along that that couch would be hers. Before he could claim a spot on it, however, Ray had to pass the test and prove himself to Dogtown trainer and CGC evaluator Cherie Mascis. He already had the basics down: He would sit and wait for his food, and sit and stay until he was released. But he tended to get a little overexcited and mouthy at times, and he could be tense around other dogs and some men.

So, after Ray returned to Dogtown, Jacque worked extensively to prepare him for the test. The hard work paid off handsomely. On July 31, Ray was put through his paces in Tara's Run, an indoor training area in Dogtown, with an audience of Best Friends interns, some of whom played the "friendly stranger" roles. Not only did Ray pass his test, but Cherie also says that he did everything "perfectly." "He's a rock star," says Jacque, who will be taking him home and fostering him for the required six-month period before she and her husband are able to officially adopt him.

Get more information about the Vicktory dogs.