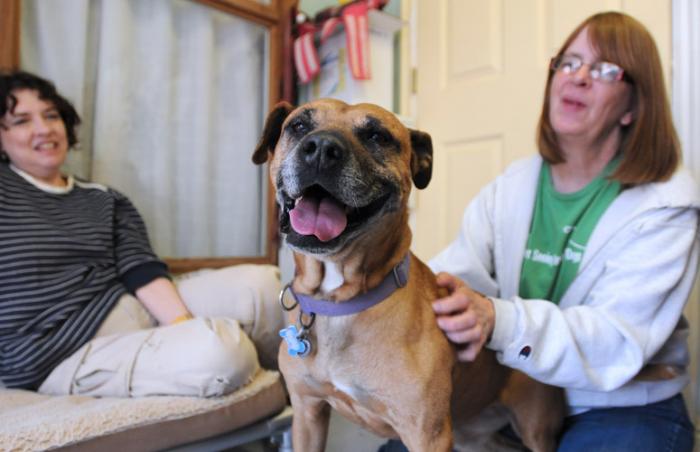 On Monday, March 11, Best Friends hosted a big reunion for six of the Vicktory dogs (dogs rescued from the property of Michael Vick) who had been adopted. Layla wasn't among them; she hasn't been adopted yet. But, in February, she reached a major milestone on the way to finding a family of her own.

A court order requires that the Vicktory dogs pass a Canine Good Citizen (CGC) test before they can go home to new families. Before taking the test, dogs participate in CGC training, which teaches them basic good manners and helps them be comfortable in the human world. During the 10-part test, CGC evaluators require dogs to demonstrate certain behaviors, such as confidence when walking through a crowd, politeness when approaching other dogs, and calmness in the face of distractions like a dropped chair or cane, or a rolling cart. 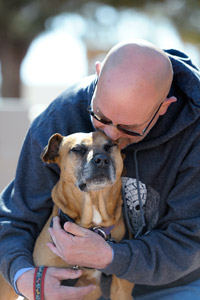 Just like any other dogs with difficult backgrounds, the Vicktory dogs had to overcome their fear of everyday situations before they could successfully complete the test. For dogs who are particularly frightened, this challenge can at first seem insurmountable. And Layla, whose fear issues were severe, was taking a bit longer than some of the others to become comfortable enough to even attempt the test.

Luckily for Layla, her caregivers realized that the high energy level in Dogtown was boosting her stress level. So, in July of 2012, Layla went to live at the Parrot Garden. Although the feathered residents of Parrot Garden can be quite vocal, Layla found the environment there much calmer and more relaxed. But that didn't automatically make her more confident.

Jacque Johnson, manager of Parrot Garden, says that when Layla first arrived, she had to wear a Thundershirt (a snug-fitting shirt designed to reduce a dog's anxiety). Jacque also provided aromatherapy and kept a "Through a Dog's Ear" CD, which has soothing music, playing constantly. The Parrot Garden folks, including caregiver Kevin Johnson, even teamed up with Layla's caregivers to install a dog door and turn an old greenhouse into an outdoor run so Layla could go in and out of the building at will.

Still, Layla would just sit and shake. When Jacque brought her outside to meet people on the Sanctuary tours, Layla made it clear she would rather run and hide. And she was terrified of common objects, such as Jacque's purse. But, over time, she improved. In fact, the improvement was so marked that Jacque says "it was like somebody flipped a switch one day." That's when they knew Layla was up for the challenge of the CGC test. 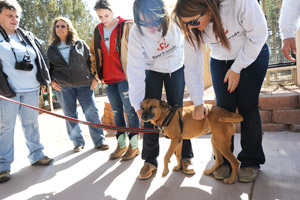 And, though her caregivers are still celebrating her success, they aren't stopping there. They've already got Layla working with Best Friends trainer Tamara Dormer to learn some therapy dog skills. With the assistance of the Dogtown staff, they are also helping Layla improve her dog skills. "She's just been amazing," Jacque beams, describing how Layla now recovers very quickly whenever she is startled, and she has also warmed up quite a bit to the people on the tours. Incredibly, Layla went up to complete strangers at the Vicktory dog event, and leaned into them.

Jacque credits Layla's progress to a huge team effort, and says that the experience has been so rewarding that Layla will call Parrot Garden home until she is adopted into a family of her own. But that's not all. When Layla's adoption day finally comes, the Parrot Garden crew won't be without a dog; they plan to continue working with other dogs who need a little extra help.

Watch a video of the Vicktory dogs’ reunion