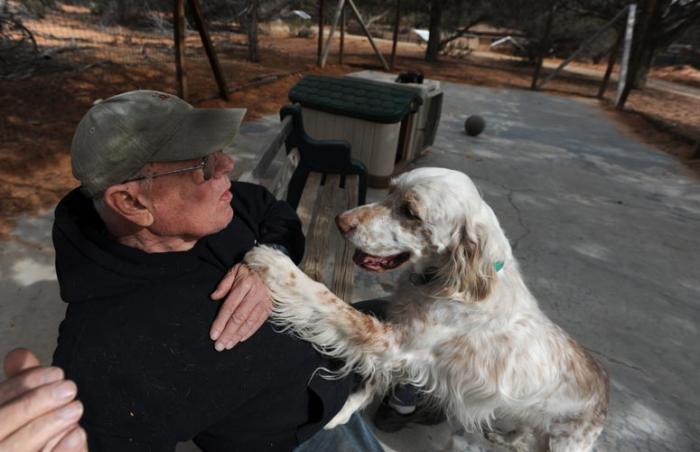 Roughly 10 years ago, Bill Splitter’s daughter Trischa interned at Best Friends Animal Sanctuary. He had no idea at the time that her short internship would set a course for his own life. 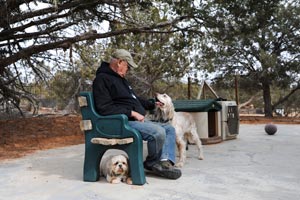 It started innocently enough. He volunteered a few days at the Sanctuary while Trischa was interning. Then after Hurricane Katrina struck Louisiana, he spent a few weeks helping with the pet rescue efforts. However, it was due to Best Friends’ Pup My Ride program, which moves dogs rescued from Midwest puppy mills to East Coast shelters and rescue groups, where their chances of being adopted are higher, that he truly found his passion. He helped for a few years cleaning crates, washing dishes, and making the process more efficient. “I was like a gofer,” says Bill. “Go for this, go for that.”

Transporting dogs got in his blood, so when that program ended, he began volunteering for Rescue Road Warriors and now moves six to eight dogs from animal control or puppy mill rescue groups every two weeks from St. Louis to Terre Haute, Indiana. He says that “they’re going to a better place” and that his work is rewarding.

Since he has so much experience transporting animals from one place to another, Best Friends recently called upon him.

“He is the best volunteer transporter I have ever worked with and so committed to helping the animals,” says Michelle. “He and I have a great relationship that we have built over the years working together, and he truly is the epitome of what every organization needs.”

Bill jumped at the chance to help and chauffeured Teddy the Yorkshire terrier, Emma the English setter, and Ernie the shih tzu to Best Friends. 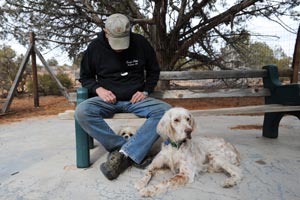 Bill visits the Sanctuary twice a year to volunteer, so he took the opportunity to help after dropping off his precious cargo. For health reasons, he can’t walk the dogs, so instead he loves to spend time socializing the Sanctuary’s canine residents. In fact, caregivers often have a list ready for him of the dogs they’d appreciate him visiting. But before he left, he wanted to reconnect with the dogs he had recently brought.

Understandably a bit shy upon arrival, Ernie the Shih Tzu would dart outside when his caregivers entered his run. So it wasn’t a surprise when Bill entered the run that the little dog took off. However, Ernie did a double take, poking his head back in the dog door.

“He looked at me, came inside, and walked over to me,” says Bill. “He recognized me from the trip.”

Soon, Ernie was on his lap, and by the time Bill left, Ernie was much more relaxed and taking treats from the caregivers.

It’s that kind of love and connection that Bill provides for all the dogs he has helped over the years. Perhaps Bill’s effort to help Ernie come out of his shell was among the reasons the little dog quickly found his forever home. And it’s dogs like Ernie who keep Bill working to Save Them All.