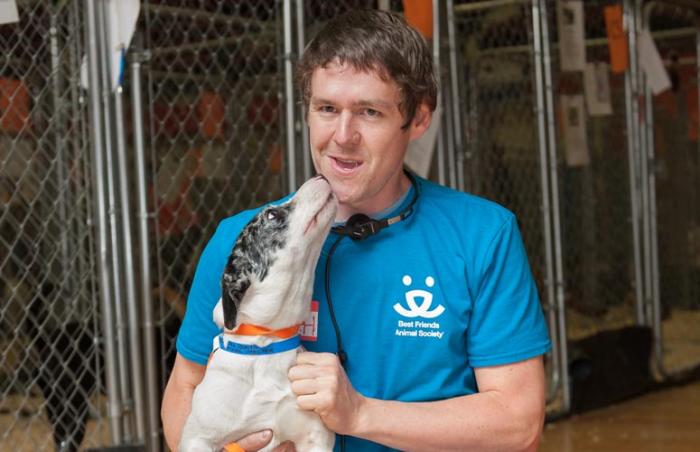 Volunteer making a difference from coast to coast

When Zach Walker moved to Los Angeles during the early 2000s, he had no grand plan to make a lifelong commitment to animal welfare. As a young man in Southern California, thousands of miles from home, he found he was missing his family, especially his dogs, and decided to start volunteering for a local rescue group to get his “pet fix.” Through that organization, he met a freelance graphic designer who was working on a flyer for one of the first Best Friends pet super adoptions, held at that time in Burbank. The artist asked him if he wanted to help out at the event. With an emphasis on collaboration, super adoptions foster a spirit of collective celebration, and Zach quickly became hooked by Best Friends’ mission and positive attitude, which has kept him coming back — no matter where he lives.

Becoming involved in animal welfare as a volunteer 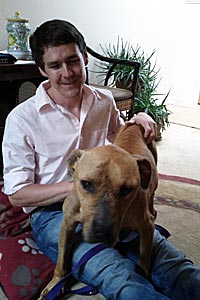 “I never really knew about the problem of unwanted pets dying in shelters,” says Zach. “I just knew I missed my dogs. I want to say getting involved with volunteering was altruistic, but my original intention was to hang out with some dogs.” Hang out he did. In addition to becoming a staple at the Best Friends events in Los Angeles, he helped out a local group, Perfect Pet Rescue, every weekend by manning their adoption events in Santa Monica.

Zach’s admiration for Best Friends was further cemented when 22 cruelty victims from the Michael Vick dogfighting bust were admitted to the Sanctuary. A Virginia native and a graduate of Virginia Tech, he had been a big Vick fan until the devastating news broke. “It was so personally moving when Best Friends took in the Vicktory dogs. That forever changed everyone’s view of how a dogfighting victim could be rehabilitated,” says Zach. One of his most cherished moments was when he and his girlfriend visited the Sanctuary. “My overwhelming reaction to meeting (Vicktory dog) Lucas was just how friendly and loving he was,” Zach says. “I couldn’t wait to meet the Vicktory dogs, and it was so special.” 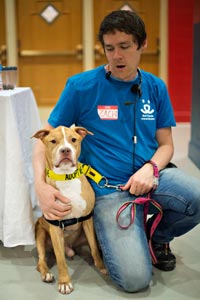 Zach remains a stalwart volunteer at Best Friends super adoptions in New York. He sees these events as a great way for novice volunteers to get started. “It’s an easy entry point for people to get involved,” he explains. “There are dozens of rescue groups and hundreds of volunteers, and everyone’s there for the animals. It is a great experience, and it’s very rewarding.” He’s also getting some special dog time by fostering dogs for local rescue group Fur Friends in Need.

It’s no wonder one of his favorite adoptions at last year’s event was a union he helped facilitate. A couple and their teenage daughter were looking for a puppy. As they combed the kennels together, they passed a dog who had earlier caught Zach’s attention. An adult miniature pinscher named Rusty was rendered homeless when his person passed away. Rusty was there with one of the municipal shelters and was sleeping as they approached his area. Zach said, “Have you met Rusty?” It was the perfect match.

From Los Angeles to New York City, there are multiple Best Friends volunteer opportunities to help animals in need, especially if saving dogs and cats is on your to-do list.