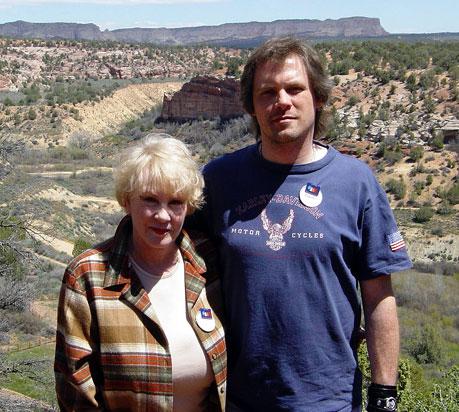 Winners of a stay at the Kanab Cottages near Best Friends

Last year, they won three free nights at the Kanab Cottages near Best Friends. And this year, they’ve finally cashed in, and it was a delight to welcome them!

Marilyn Nicholson and her son, Scott Webster, were the highest bidders on the three-night stay at last year’s silent auction at Best Friends’ Lint Roller Party in Los Angeles. And they say they had to beat out some very enthusiastic competition to take it!

You might call it beginner’s luck that they came away with their first-choice item at the auction. Marilyn and Scott had never been to a Best Friends Lint Roller party before. Scott is the one who turned his mother on to the cause of Best Friends. Since they both live in California, they went together to the grand, splashy party Best Friends holds in Los Angeles each year. (Glitz, glamour and pet hair!) Though seeing stars doesn’t mean much to the two of them, living where they live, they declare it was a great party, and they couldn’t wait to visit the sanctuary.

A stay at Kanab Cottages near Best Friends Animal Sanctuary

As the 2005 Lint Roller Party was about to roll around, they realized they hadn’t taken their trip yet. They thought they should do it before the next one so they could tell everyone from personal experience whether they should bid high on that item.

And the verdict? Thumbs up! Marilyn, gazing out at the canyons from the glass-encased lunch room, declared, "Coming up here is like walking into a whole different world." She just loved the animals, and said it has inspired her to get involved in animal welfare back home.

What a treat to have them at the sanctuary, bringing such positive cheer! A big thanks for the bid, which went to help the animals, and we look forward to seeing them at the next "Dare to Wear Black" Best Friends Lint Roller Party in Los Angeles.

Read about a mother-daughter trip of a lifetime to Best Friends Animal Sanctuary.