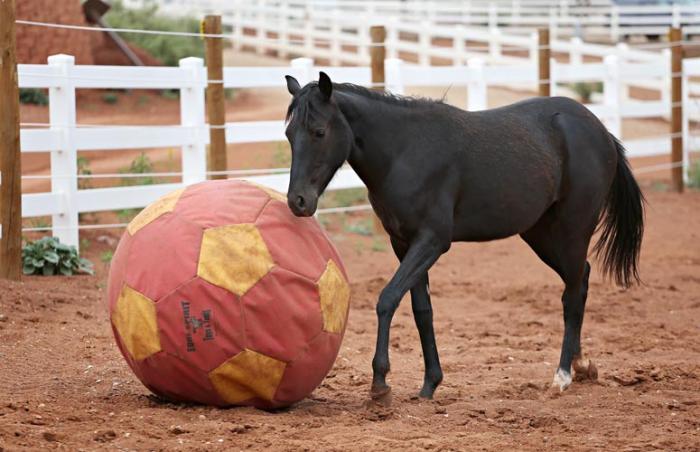 Young horse has a ball at Best Friends 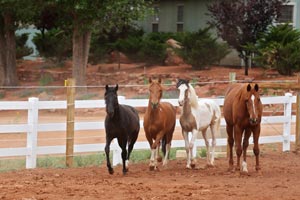 Uno is one lucky little horse. Right before she was born, her mother and several other pregnant mares were rescued and brought to safety at a horse rescue organization not far from the Sanctuary. Then, about a year later, she and two other fillies from that rescue came to Best Friends. In a short time, Uno’s future went from bleak to brilliant, especially since staffers discovered what makes her happier than anything else.

As with all the horses at the Sanctuary, Horse Haven caregivers and trainers use Parelli Natural Horsemanship techniques to teach the young fillies good manners, to build confidence and to ensure they’ll become willing partners to whoever adopts them. Though they started their education at the rescue organization, the young, spirited horses needed some finishing school — especially Uno.

Cultivating confidence in a filly

Of the three fillies, Uno is the feistiest and most curious. She’s also becoming the most confident as Horse Haven staff members work with her to cultivate that trait. Like most young horses, Uno liked people and quickly became comfortable around them. But, when she arrived at the Sanctuary, she was still afraid of new situations and unfamiliar things, some of which she really needed to get comfortable with — horse trailers and farrier equipment, for example.

Despite being unsure about the world around her, the pretty little mustang/quarter horse has always loved to explore. After initial fright or hesitation, she recovers quickly, her curiosity emerges, and then she plays an approach and retreat game with whatever startled her. Once she’s sure the scary thing actually isn’t so scary, she shows her boldness by sticking her head right into the trailer and tipping over anything she can get her nose on.

Young horse having a ball 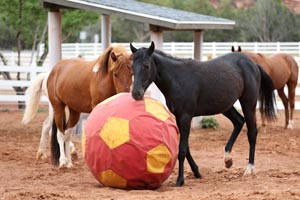 Since she’s so smart and spunky, Uno’s a pro at getting into mischief. So her trainers and caregivers work to not only help her feel safe in new situations, but also to keep her busy mind active. It’s mainly a matter of giving her more exposure to things she’s not used to, along with plenty of things to do. Happily for everyone involved, one particular training tool fits the bill more than anyone expected.

When Uno saw the super-sized training ball for the first time, it was as if she thought: “Wow, it moves. I can chase it. How cool!” Now, the active yearling is quite literally having a ball at the Sanctuary. She runs after it, sits on it, rolls on it and tries to lie on it. With just one simple toy, she can entertain herself for hours.

A teaching tool for a horse

Uno’s silliness with her favorite toy is perfectly welcome here, because her games are more than fun. They are her special way of getting out and about, meeting new people and seeing new things. It’s all helping her blossom and find her place in the world. And, best of all, she’s growing into the brave, self-assured horse she was always meant to be.