Image
Registered as a therapy animal by Pet Partners, a cat, who was once homeless in a shelter, now helps Alzheimer's patients and other people in need.
By Jen Reeder

At first glance, Hercules Meowlligan might seem like a fat cat — and not because of his size. The brown tabby can look almost smug as he cruises around in a stroller while wearing his signature bow tie, giving off the air that he’s kind of a big deal.

Actually, he is kind of a big deal. That’s because this formerly homeless feline gives back to his community as a therapy cat. Yes, a therapy cat. There is such a thing.

Hercules was about three years old when Collette and Brian Bien adopted him in 2016 from a shelter in Milwaukee, Wisconsin. His easygoing nature belied the fact that it was his second rescue: He was rescued first as a stray kitten, and then was surrendered to animal control by people who no longer wanted him. “We were amazed at his confidence,” Collette recalls. “He didn’t care about the car ride, or the new dogs he had to live with. It was astonishing.”

It was quickly apparent, however, how deeply Hercules cares about people. The Biens faced intense grief when several family members, including Brian’s father and Collette’s sister, died in a short span of time. There was a lot of crying in the house, and Hercules was quick to offer comfort. “He senses when somebody is sad. He’ll just look at you through his green eyes and maybe he’ll squint a little bit, then he gives you this not forceful but meaningful head-butt against your hand or whatever body part might be closest,” Collette says. “Head-butts for cats are very, very significant.”

Collette soon realized that Hercules could help other people, too. In 2017, she and Hercules became a registered therapy cat team through the nonprofit Pet Partners, which evaluates and registers therapy animals throughout the United States. And Hercules officially had a very important job. 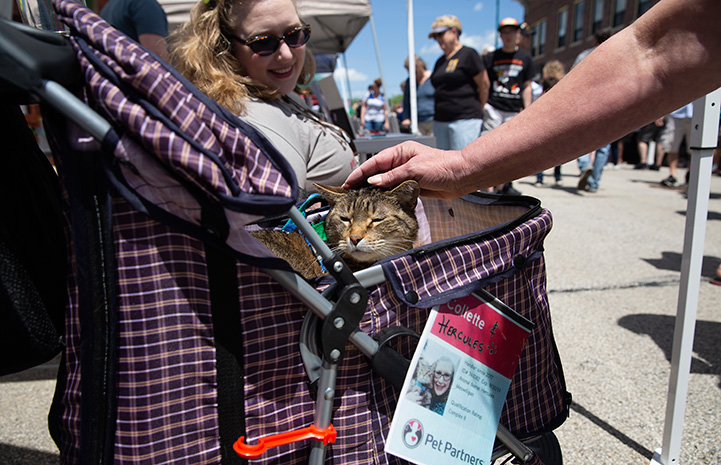 Though Collette works full-time at a local cancer center (caring for others just seems to run in Hercules’ family, apparently), she and Hercules volunteer together twice a week, visiting everyone from college students to residents at assisted living facilities, adult day care centers and hospices. At the start of a visit, Hercules leaps into his stroller, eager to get to work. When they reach their destination, Collette places his soft fleece blanket on a table or a lap so that he can give and receive affection. Other times, he’ll stroll around wearing his harness and leash, visiting everyone in the room.

“I would say everybody is like his new best friend,” Collette says. “He just brightens their day.” Some encounters are lighthearted. A Taiwanese student in a study abroad program was so delighted by Hercules that he asked Collette what makes a good therapy cat (friendliness and adaptability, for starters). And he resolved that when he returned to Taiwan, he’d have his own pets tested to see if they would be suitable for the role.

Cat therapy for people with Alzheimer’s

Other interactions are more poignant. For 10 weeks, Hercules and Collette visited Adaline, an elderly hospice patient with Alzheimer’s disease. Early on, while petting Hercules, she told stories of cats she had loved in her life. At the end of the visits, she’d say things like “Oh, Hercules. I love seeing you. You make my day. You’re the best.” Then she’d look at Collette and say, “You are, too, honey.”

The pair continued to visit Adaline as her health deteriorated. Toward the end, she could no longer speak, and Collette would place Hercules and his blanket directly on the elderly woman’s lap. On their last visit, she simply nodded her head and stroked his fur, scratching behind his ears the way he likes while his purr rumbled. “To this moment, I kind of tear up about it because nothing was being said. I didn’t say anything. She didn’t say anything. Hercules obviously didn’t say anything, but you could hear and feel the love in the room,” Collette says. 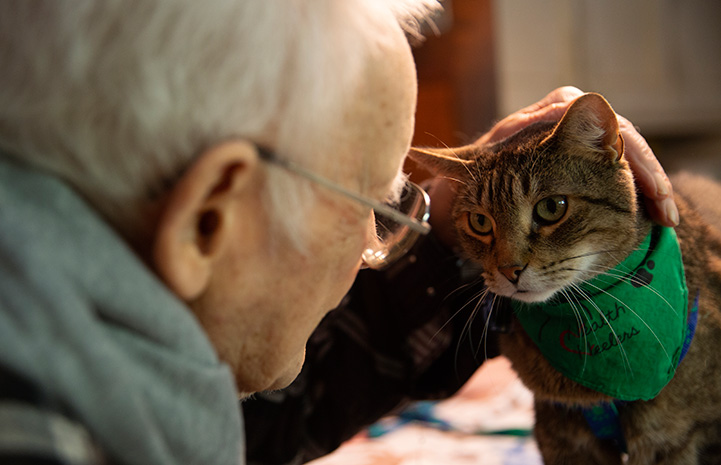 What makes a pet good for therapy

As cat lovers learn about therapy animals like Hercules, organizations are receiving more and more requests for visits from the friendly felines. Hercules is one of five therapy cats who volunteer with Health Heelers, which organizes volunteer therapy animal visits in metro Milwaukee, and trains counselors and other professionals who want to incorporate animal-assisted therapy into their practices.

Laura Hey, the occupational therapist who founded Health Heelers, says Hercules and Collette are an outstanding team. “They’re very tuned in to each other and Collette is keenly aware of Hercules’ needs, which is very important for any handler,” she says. “Hercules just keeps developing his skills and even though he’s connected to Collette, he’s very interactive with the people that he’s visiting with and seeks out that interaction and contact with others. Not a lot of cats do that.”

Mary Margaret Callahan, chief mission officer at Pet Partners, agrees that the therapy animal’s welfare is a key consideration. To that end, the nonprofit re-evaluates therapy animal teams every two years to make sure the pet still seems to enjoy the work and the team works well together. “We really believe that a strong relationship between a handler and the animal is what sets everyone up for success on these visits,” she explains. “The animals trust their handlers not to put them in positions where something bad might happen to them, right? We want to keep this a positive experience.” So it makes sense that her mantra is “YAYABA,” which stands for “You Are Your Animal’s Best Advocate.”

Mary Margaret notes that the independence that so many cat lovers – herself included – appreciate in felines isn’t always an ideal trait in a therapy cat. A successful therapy cat has an affiliative nature and enjoys interacting with strangers, traveling in a car, wearing a harness and walking on leash, and doesn’t react negatively to loud noises or other therapy animals.

While cats were one of the original species of pets registered as therapy animals by Pet Partners – along with dogs and horses – back in 1990, they are still greatly outnumbered by their canine counterparts. In fact, according to Mary Margaret, Pet Partners had 11,802 registered therapy dog teams in 2018, but only 252 cats. It should be noted that the organization also registers therapy rabbits, guinea pigs, potbellied pigs, camelids such as llamas and alpacas, birds (particularly parrots) and even rats.

So, therapy cats are still somewhat rare – and special. They offer stress relief not just in the environments previously mentioned, but in places ranging from hospitals to elementary schools, where they participate in reading programs, to courts of law, where they support children who may need to testify against their abusers. “Having a visit from a therapy cat can be a really positive distraction in many ways,” Mary Margaret says. “If you’re in a hospital recovering from surgery or you have some sort of health challenge, getting to talk to a nice person and to pet their lovely cat is a great way to reorient yourself to the moment, because animals live in the moment.” 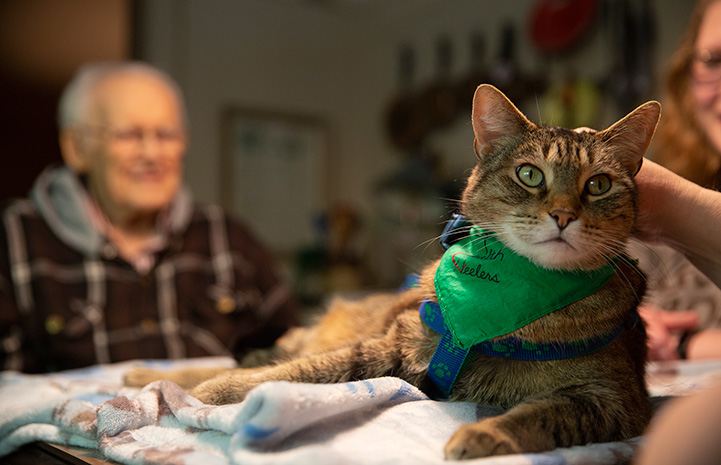 It’s not just about the short-term fun of having a fluff ball on your lap. Research shows that there’s a real benefit to visits from therapy animals, according to Steven Feldman, executive director of the nonprofit Human Animal Bond Research Institute, which has more than 29,000 entries in its online database.

“We know that animal-assisted interventions boost oxytocin and dopamine and serotonin, all the good neurochemicals that make us feel better, and that being with a therapy cat can also reduce cortisol, which is a stress hormone,” he says. “We can actually measure changes in the brain that show how these animals are beneficial to us.” Other documented benefits include lowering blood pressure, changing perceptions of pain and reducing anxiety for different populations, including pediatric cancer patients and caregivers.

Recently, Collette and Hercules had a profound visit with a caregiver and her elderly father, a veteran of both World War II and the Korean War. The man hadn’t been out of his house in a very long time, but he broke into a smile as soon as Hercules entered his home. He shared photos of his late cats and chatted happily with Collette about their names and favorite toys.

Hercules usually zeroes in on the person he’s supposed to visit, but during this outing, he split his time between the gentleman and his daughter, who has her own physical challenges after surviving a stroke. She’s been caring for her father for years and while she was relieved to see her dad getting attention, she enjoyed numerous Herculean head-butts herself. “Hercules could sense that both he and she needed therapy time,” Collette says. “The daughter was crying. It was this special moment shared between three people and a cat.”

Hercules was unfazed by the presence of medical tubes and a walker. “He doesn’t see the medical equipment,” Collette explains. “He just sees a set of eyes, a set of hands, and love.” Despite the bow tie and the luxurious set of wheels he travels around in, it’s Hercules’ ability to recognize what really matters – an abundance of love and a whole lot of gentle head-butts – that truly makes him kind of a big deal. 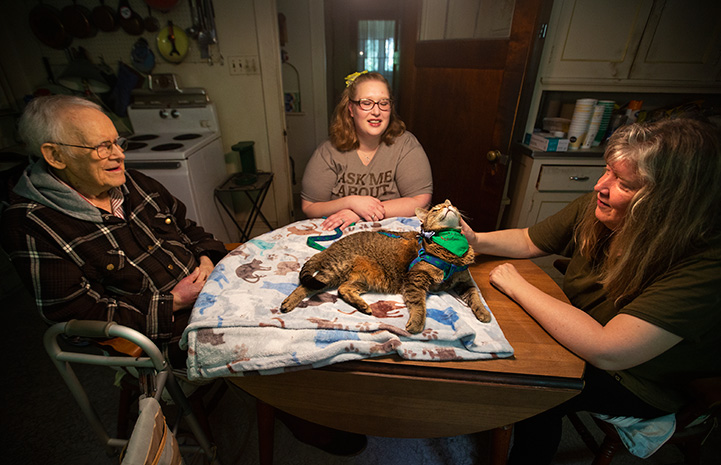