A most extraordinary mama cat’s love knows no bounds

Image
First-time foster volunteers team up to care for a mama cat and her family, but little did they know more kittens were on the way.
By Emily Gambone Photos by Annika Harley

Gabi Olmedo finished filling out the foster application for Best Friends in Atlanta. Then she called her girlfriend, Annika Harley, over to ask, “Do you mind if I submit this?” Annika readily agreed. They had just moved in together a few months earlier, and with Annika taking a gap year and working part time, and Gabi’s college courses online for the semester, they knew they had the time and flexibility to foster kittens.

They thought two or three kittens would fit well in their small apartment, and maybe one would turn out to be the little gray boy kitten they had imagined adopting one day.

Meanwhile, Augusta Animal Services was preparing to transport many mother cats and babies to Best Friends in Atlanta. Among the mamas was Agave, a sweet young cat nursing not just her own babies, but also orphaned ones of different ages. She had already proven herself to be attentive and loving to the six kittens in her care, yet no one knew just what an amazing mother she would turn out to be.

When Gabi followed up with Lindy Foster, lifesaving outcomes coordinator for Best Friends  in Atlanta, she explained that they needed a foster home for a mama cat and her six babies (twice the number of kittens they expected), plus an adult cat. Still, Gabi and Annika didn’t hesitate saying yes. Best Friends would supply all the physical things they would need (from food and litter to toys and blankets and heating pads) and Gabi and Annika would provide love and daily care to Agave and her kittens. 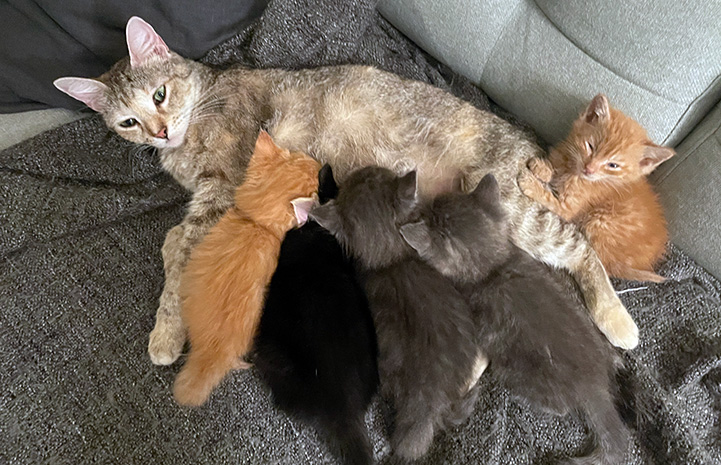 Support for a mama cat and her babies

At the shelter, Mama Agave did her best to care for her babies, but an outbreak of a severe upper respiratory infection left the vulnerable kittens sick and thin, their eyes and noses crusted, their fur matted. Still, the milk they drank from her gave them not only their ideal nutrition, but also antibodies that they would not have received from bottle-feeding.

When Mama Agave and the kittens arrived at Best Friends, the medical team examined them and found that, despite Mama Agave’s care, the kittens were still in poor shape. And one of the two orange tabbies in the litter was much smaller and weaker than the others.

Since Gabi and Annika were first-time fosters who had already taken on more than they had intended, Lindy offered to have someone else to bottle-feed the little orange kitten. But looking at her, Gabi could see that the kitten’s chances of surviving were low. Gabi didn’t want to deprive her of the comfort of being with her mother and siblings, even if it meant they would have to syringe-feed her kitten milk replacement every four to six hours, while also giving everyone antibiotics twice a day and applying eye ointment three times a day.

The first night at home, Annika sat in the corner of their bedroom holding the kittens and sleeping, which gave Mama Agave a chance to rest. Against all odds, Little Orange (as Gabi and Annika called the tiny kitten) lived, but Big Orange, who had seemed so robust and strong, took a turn for the worse. Despite emergency veterinary care, he did not survive.

The remaining kittens needed intensive treatment, but Gabi and Annika, still grieving Big Orange, were dedicated to their care. And after the scary initial time with sick kittens, Gabi and Annika’s fostering shifted into joy. As Gabi surveyed the babies looking up at her in the living room, skittering around the bedroom and following her through the apartment, she would ask, “Who dropped all these cotton balls?” 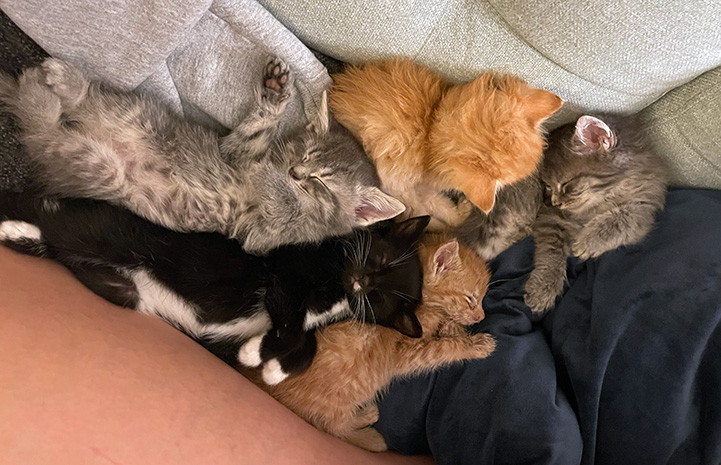 Meanwhile, with her babies healthy again, Mama Agave began acting strangely. She hissed at her beloved kittens, wandered around the apartment meowing loudly and despite growing round with unlimited access to food, she began to tip over the trash and break into the pantry. The loss of Big Orange still fresh in their minds, Gabi and Annika were concerned her behavior could indicate she was sick. They took her to see Ashley Goddard, a Best Friends veterinary technician who had other thoughts about what was behind Agave’s behavior. She could be pregnant.

Gabi and Annika were stunned as Ashley explained that female cats can become pregnant again soon after giving birth, which is what must have happened prior to her arrival at the shelter. Gabi remembered petting Agave a few nights earlier and thinking she’d felt movement in her stomach, but she’d dismissed it as impossible. This mama had just had babies. 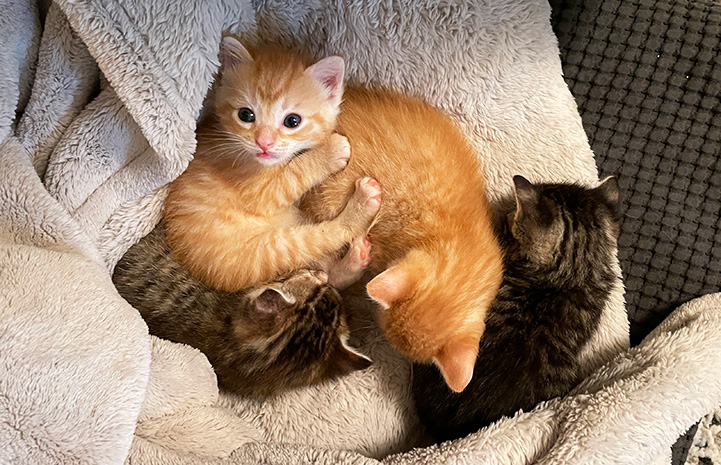 At home, Gabi and Annika prepared different nest sites for Agave by placing old towels under the couch, in the closet and under the bed. They knew to watch for signs of impending labor — Agave pacing and her temperature dropping. So, when they looked under the couch to show their friend where they had put one of the nests, they didn’t expect to find Agave had already given birth to a kitten. Over the next few hours, while continuing to groom her older kittens, she gave birth to two more babies.

The three new babies were big and healthy. Annika and Gabi surveyed their sweet mismatched foster family as Agave continued to nurse all the kittens. There had been so many unexpected moments in their foster journey, but Agave was not done surprising them. Twenty-seven hours after giving birth to the first kitten in her second litter, she delivered a fourth healthy baby.

Agave mothered all her babies, often carrying Little Orange to nurse with the newborn babies, sometimes over Little Orange’s protests. But Mama Agave sensed that her tiniest kitten, who had struggled so much, needed extra mothering and nutrition. Agave spent most of her time tending the new babies and Little Orange under the couch, but twice a day, she would emerge and call to the bigger babies to come nurse.

[Mama dog was sad when her puppies grew up, so she took on eight more] 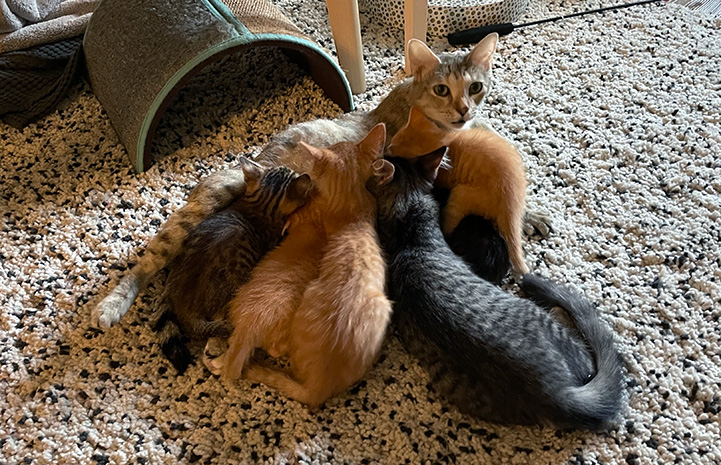 Foster volunteers make all the difference

About a week after the new babies were born, the two gray tabby girls from Agave’s first litter were adopted together and the little black-and-white kitten found her home, too. But after all they had been through together, Annika and Gabi couldn’t part with Little Orange. She wasn’t the little gray male they had imagined, but by this time they were used to the unexpected. And when they listed the brown tabby boy for adoption, they found they couldn’t bear to see him go either, so Basil joined Little Orange as a permanent part of their family.

While Agave insisted Little Orange nurse alongside the new babies, Basil helped groom and care for his younger siblings. In anticipation of Annika and Gabi leaving for a vacation they had planned long before all the unexpected surprises of fostering, Agave and her second litter of kittens were moved to a new foster home.

Gabi and Annika didn’t expect to foster a mama and her six babies, and they didn’t expect for them to be sick or that they would lose one of the kittens. And they certainly didn’t expect to welcome a second litter during their first foster experience. But in the end, they are proud of their efforts to save the babies who came their way ― so many more than expected.

“I can't stress how amazing the fosters were,” says Ashley. “Agave and her kittens would not be here without them and their care.”

Today, Mama Agave is living with her new family. She won’t be expected to care for kittens ― orphaned or her own, litter after litter — because she has been spayed. Her sweet, mismatched babies she nurtured through illness and pregnancy have all been adopted into loving homes. Now, it’s her turn to be mothered and loved, and her turn to enjoy long, leisurely hours napping in sunbeams after a job well done.

As for Little Orange, who was not expected to survive, Gabi says she is a daily testament to her Mama Agave, who insisted on nursing and caring for her alongside her new babies. “We like to say she was reborn (with the new kittens),” says Gabi.

These days, Little Orange lives with Annika and Gabi and her brother Basil in their small apartment. The chronic sniffles from her early illness don’t seem to bother her. But with her frequent sneezing, Gabi says, “We are always saying ‘Bless you,’ so Little Orange is filling our home with blessings.”

Snuggling with Basil and Little Orange and thinking back on all of the work and worry, on Mama Agave’s dedicated mothering of all her unexpected kittens and on an apartment full of kitten cotton balls, Annika and Gabi would do it all over again. 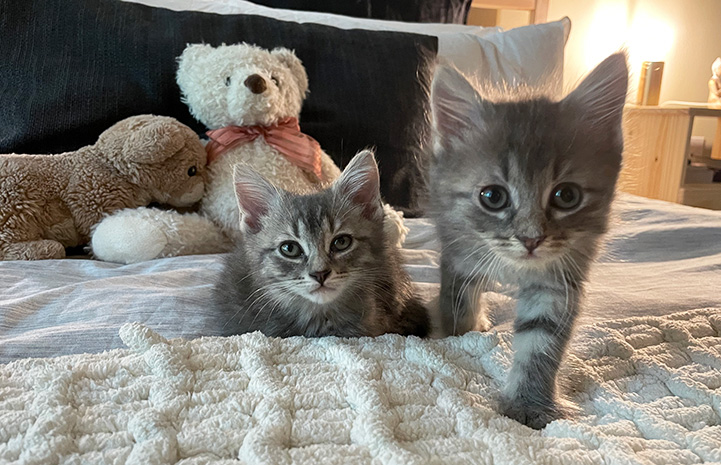 No long-term commitment is required — only love, a little time and maybe a few treats.