By Sarah Thornton November 16, 2021
Photos by Victoria Brown
Ken and Java were just what their new people needed after a tough year

At the beginning of the year, Vicki and Paul Brown said goodbye when their beloved 17-year-old cat, Gabe, passed away. And just a few months later, their senior dog followed him. Such difficult farewells caused them to make the decision to be without pets for a while which, Vicki says, was OK when Paul was working from home. But that changed when his office reopened and he went to work every day. “This house was so empty with just me in it,” Vicki recalls. “I said no, we can’t.”

In a Best Friends Animal Sanctuary Facebook post about sponsoring animals, a certain cat kept popping up — a fluffy orange-and-white fellow named Ken. Not only did he look so much like Gabe that Vicki couldn’t shake it, but he shared the name of a dear friend they had lost several years before. Vicki felt completely drawn to this cat.

So, when the emptiness of the house became too much, there was no question about who they would be adopting. And so that Ken would have a friend, they also adopted Java, his roommate.

The perfect opportunity for two cats with FeLV

Both Ken and Java came to the Sanctuary from shelters after being diagnosed with feline leukemia (FeLV), a viral infection that weakens a cat’s immune system. It makes them more susceptible to other illnesses and secondary infections, and since other cats can catch it if they’re in close contact, it’s best if they share space with other cats who have the same condition. Since many shelters don’t have room for that, Ken and Java got their second chance at the Sanctuary — in an area specially designed to house cats with FeLV.

Unfortunately, having feline leukemia can also make it harder to find a home, since many cat lovers already have a feline friend at home without the virus. But for Vicki, her empty home provided the perfect opportunity to give Ken and Java the family they’d been waiting for. They joined the growing list of cats with feline leukemia who’ve found their happily-ever-afters through the Sanctuary.

Vicki and Paul traveled in one day from Colorado to the Sanctuary in southern Utah to pick up their new family members. Then they took two days on the way home so the cats could get out and stretch. 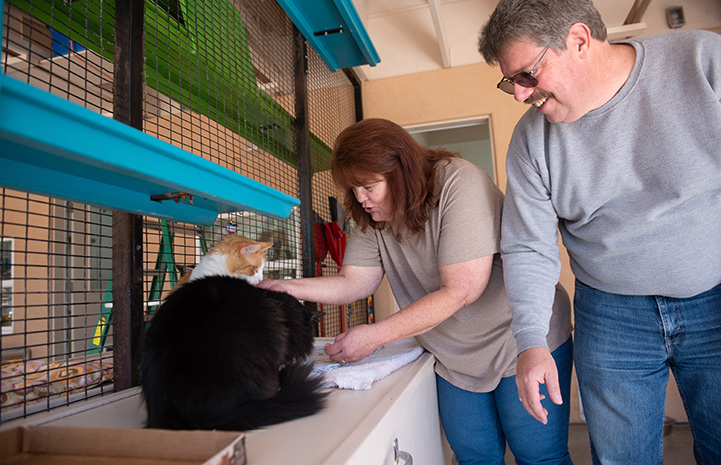 From rocky start to cozy cuddles

When Ken and Java moved in, it took some adjusting for everyone to get settled into their new lives. Mealtimes were tricky, with both cats trying to get to their food as soon as the can was opened, and Java wolfing down his meal so he could try to steal Ken’s. It didn’t matter that they had dry food accessible all the time. They just wanted that yummy, yummy wet food. 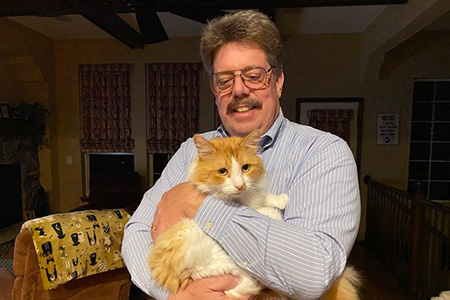 They started feeding Ken in the deeper half of their double sink, so he had some protection, while Java ate on a counter on the other side of the kitchen. Eventually, they fell into a routine that quieted the food drama. But Java had more things to learn. When he became overexcited or overstimulated, he expressed himself with his teeth, and he wasn’t very gentle about it. Only two weeks after bringing him home, Vicki began to wonder if they’d made the right decision to take them both.

They didn’t give up on Java and Vicki says it paid off. “Now, he’s a love. And he’s learned, if he gets too rough with something like treats, I point my finger and say no, and he goes gentle.”

In fact, Java has become the one who likes to snuggle the most. Ken is happy to cuddle up next to Vicki and Paul, loves attention and loves being petted, but he’s not a big fan of being picked up and held. On the other hand, Java wants to be held, hugged and touched all the time.

“Last night, for instance,” Vicki says, “it was a little after midnight and all of the sudden I get this brush against my face and a paw in my eye. (Java) was trying to settle in around my neck, and I knew that wasn’t gonna work so I moved him a little bit and he went down by my ankles and slept in between my feet. I woke up about 5 a.m. and he was still there.”

Java has found other ways to stick close to Vicki. The week they brought the two cats home, Vicki had back surgery. Afterward, she had a walker with a bult-in seat to get around the house. “Every time I’d stroll around the house,” says Vicki, “Java jumped right on it. He would just ride around the house with me on it. And he sleeps on it because it’s on the side of my bed.”

Now, all is well in the Brown household, if not always quiet. You never know when Ken and Java might go running and sliding along the wooden floors in bouts of play wrestling.

The comforting presence of cats

Life with the cats is full of little magical moments. Ken, who grabbed Vicki’s attention by looking so much like Gabe, took to sleeping in the same spot on the back of the couch. “The first time he curled up there,” Vicki says, “I turned and I looked … Oh my gosh, I thought it was Gabe.” 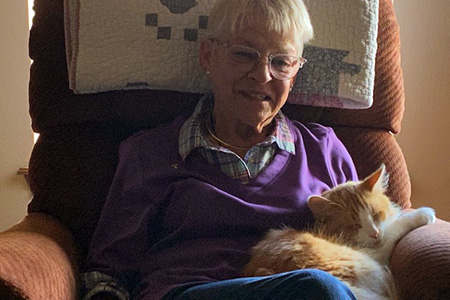 When Marilyn, Vicki’s best friend, came to visit, Ken caught them both by surprise. “We were sitting in the living room and Ken actually jumped up on her lap and cuddled up,” says Vicki. “That’s the only time he’s ever really done that and stayed. And he fell asleep.”

It wasn’t just that Ken was snuggling up for a nap on someone’s lap for the first time. Ken, the dear friend they’d lost years earlier, was Marilyn’s brother. “The fact that Ken did that and had never done it before,” says Vicki. “You know, our minds go all over the place. I believe in stuff. Just because you can’t see it doesn’t mean it’s not there.”

Ken has truly become a healing, comforting presence in the home. He’s taken a strong liking to Paul, which Vicki says has delighted her husband. Previously, when all of their pets were mama’s boys who stuck close to Vicki, she says it sometimes made Paul feel like they didn’t love him. “So I’m so tickled that Ken has really taken to him,” she says. “He’ll go and sit by Paul on the couch, or he’ll go up and sit behind him on the back of the couch. Or if he’s in the den working on the computer, Ken will go in there and he’ll sit on a chair that’s in there. So, Paul feels good about that now. He has a buddy now, too.”

They laugh when Java blends into his cat tree and is only visible in his hideaway because his leg sticks out. Vicki has ordered a double-decker stroller for taking the pair out for walks. She suspects Java will really enjoy the stroller, given how much he liked to ride on her walker. Everything is right again with the two new feline family members around.

As for Ken and Java’s feline leukemia: It hasn’t made any difference to the Browns because the pair hasn’t needed any medication or special care. “They (cats with FeLV) need good homes and they’re good pets,” says Vicki. “If I could’ve taken them all home, I would have. 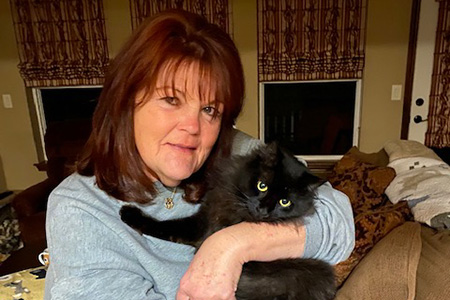 “I have two cats with feline leukemia, and you would never ever know it. (But) we have to be more aware of their health and if it looks like they’re getting sick or if we notice something, we take them to the vet (rather than) wait and see if it’s just a cold.”

Ken and Java have found their home, and they’re soaking up all the love they can and returning it doubled. And, in Vicki’s words, “All is well with the world of the Brown house.”

When you adopt a homeless pet, it’s not just you helping them. They can help you, too.

Kids have the time of their lives fostering kittens