Jimmy the cat was so depressed after losing his home that he stopped eating and needed a feeding tube, but now he's thriving in a new home.
By Diane Barber

When he arrived in April at Best Friends in Los Angeles, he was called Jimmy. By the time he was adopted in late July, he was The Cat of 1,000 Nicknames.

At four-years-old and weighing in at 20 pounds, this sweet and sensitive brown tabby was dropped off at the Los Angeles Animal Services East Valley shelter and transferred two days later to the care of Best Friends. The sudden change in Jimmy’s life — moving from a home with a family and animal friends to an unfamiliar setting surrounded by strangers — took an emotional toll and Jimmy stopped eating. The fact that he was significantly overweight meant that his hunger strike could have a  serious consequence: fatty liver disease.

After three days without food, the Best Friends foster team sent Jimmy home with me, a Best Friends foster program volunteer, hoping that he would start eating again. By day six he still wasn’t eating, so the medical team inserted a feeding tube. My wife, Karen Niemeier, and I had fostered a cat with a feeding tube before, so we knew what to expect. We were determined to give our new foster cat the best possible care and convince him that despite the stress of his return, he had a happy life ahead of him. 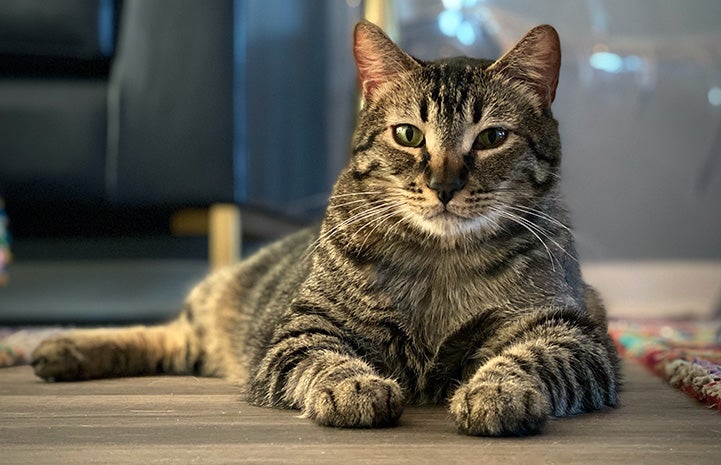 Jimmy had his own room at our house. He spent the first week hiding under the bed or in the closet and we would coax him out four times a day to feed him. Jimmy was an anxious cat, and he needed a lot of reassurance. Because of his weight, he required a lot of calories, which meant a lot of food. Each meal involved 10 minutes of prep time, 10 to 15 minutes of petting and reassurance and 15 minutes of slowly pushing food through the tube to get him the nutrients he needed. If he was startled, he would bolt under the bed and the process would start over again. It took us all a while to get our rhythm, but we figured out how to make it work.

After a week, we started leaving the door to the guest room open a few hours a day. Jimmy met our animal companions (three orange tabbies and a Boston terrier) and gradually worked up the nerve to explore the house, mostly by running from under one piece of furniture to another until he made his way around the space. Still, the guest room remained his safe zone and he would sprint down the stairs and under the bed at the slightest provocation. 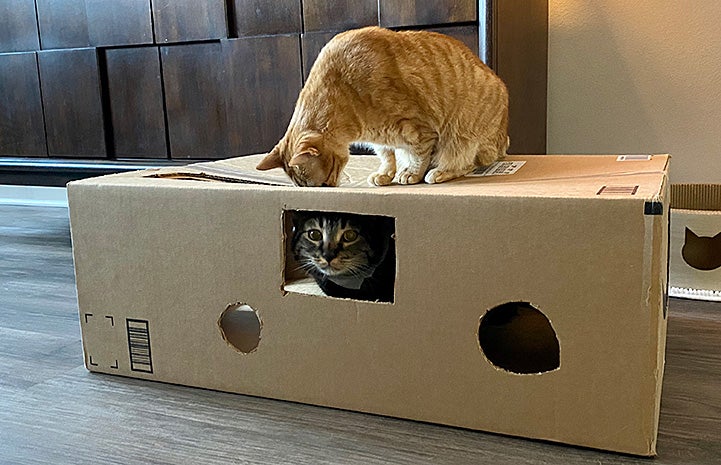 Over time, we came to realize that there was an internal battle going on in Jimmy’s head. He seemed to be afraid of everything, but he also craved affection and attention. If we entered the guest room when he was lounging on the bed or walking around, he hid. But if we sat on the bed and stayed for a while, he would steel his nerves and slink up to join us. Despite his fear, he longed for company.

After a while, our feeding ritual was as much a bonding experience as it was a critical component of Jimmy’s care. While there was no medical reason for his refusal to eat, his emotional state was fragile and he needed us to take care of some of his basics until his mental reboot was complete. 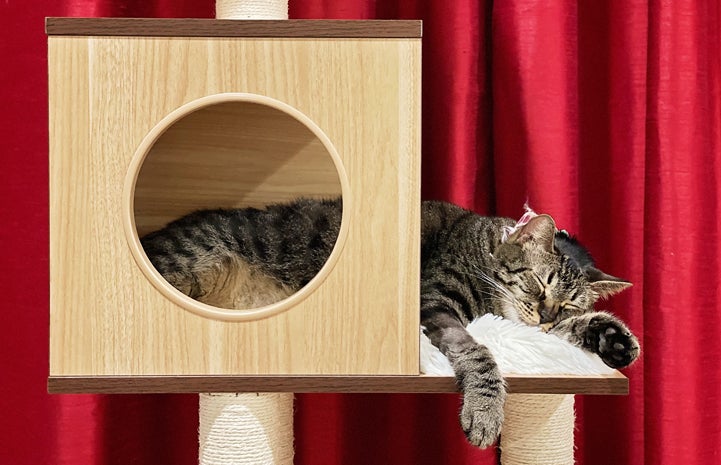 It took Jimmy 37 days to decide he was ready to eat on his own, and he managed to stay otherwise healthy with no signs of fatty liver disease, thanks to the tube feeding. With every passing day during that time, his confidence grew. We learned he loves to play and can be quite talkative when he has something to say. He loves to be brushed and has a habit of flopping down on his side with force (imagine a tree falling) when he wants to be petted. He’s receptive to hugs. He’s fond of aerial views and will climb on anything in search of the spot with the best view. He’s a character through and through.

Once Jimmy was off the feeding tube and out of the woods, he was made available for adoption, but it took another two months for him to get noticed. Marin Miller and Martin Billany lost their cuddly senior cat, Harley, in mid-July and he left a big void. “He was such a presence and when he was gone, it was just felt by both of us,” says Martin. They knew they could never replace Harley, but they had a lot of love to give and decided that the void would best be filled by another cat in need of a loving home. 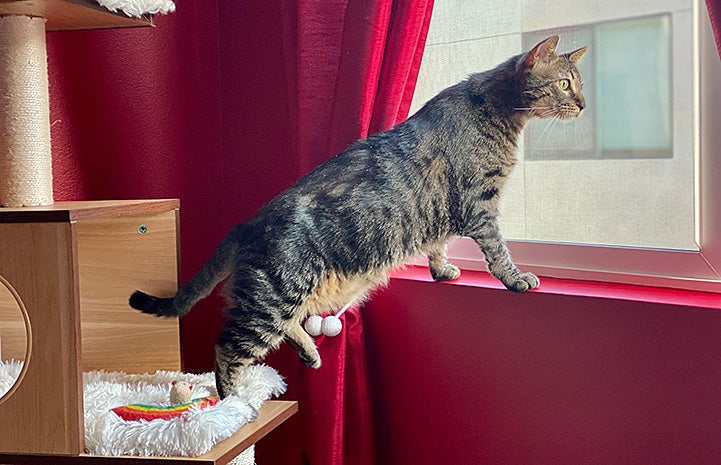 As Marin and Martin were looking through online listings of adoptable cats, they came across Jimmy’s profile:

“Jimmy is a sweet and sensitive hunk of a cat capable of making any home complete. And by hunk we mean hunk! This boy is adorably chonky, completely huggable and he has the demeanor of a cream puff, which we find highly appropriate. Jimmy gets along with other cats, loves attention, craves companionship, goes crazy for wand toys and treats, and appreciates snuggle time. If you're on a mission to adopt the hunkiest cat in the country, look no further. Jimmy is your man. Adopt Jimmy!!!!!!!!!!”

From the description, Jimmy seemed like a good fit –– sensitive, social, huggable. But it was his face that reeled them in. “It really was his nose that snagged me,” says Marin. “He’s so cute and handsome, and I loved that he was chonky.” It was love at first sight. Three days later, Marin and Martin came over to meet Jimmy face-to-face.

“I honestly fell in love with him the moment I saw him,” says Martin. “I have a vivid memory of walking in on him mid-play and he had this sort of look like ‘I don’t know who that is but I’m having a good time.’ I really connected with his expression and his physicality. He was a real character.”

By the time they left the meet-and-greet, Marin and Martin had concluded that Jimmy was destined to be with them. “We knew. We were already naming him in the car on the way back home,” says Martin with a laugh.

She tossed out Gordo, Gordito and a few other ideas, and then it struck her: “Gordon Freeman is a character from a video game, and there’s a part in the game where the G-man comes up and says, ‘You are the one free man!’ And I thought Jimmy is a free man now. He’s no longer in a shelter. It fit.” To which Martin adds: “And he’s such a big guy with a big presence. He’s got to have a big name.” 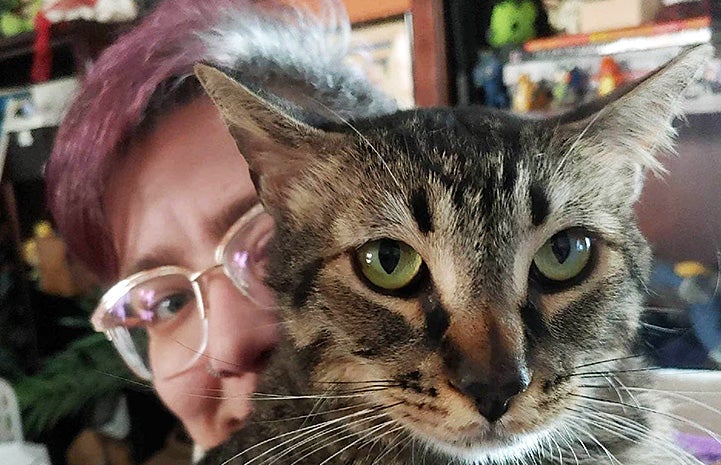 A loving family and a new life

It’s been nearly three months since The Cat of 1000 Nicknames moved in with Marin and Martin, their cats Meatball and Mozzarella, and their dog, Tilly. The love they have for each other is strong, and although his life with them is just beginning, the long path traveled to get there brought with it valuable lessons.

Martin says Gordon’s story is one of love overcoming pain and fear: “We were in a lot of pain because we had just lost Harley. And I think (likewise) Gordon was afraid to get to know us initially … It was an expression of love that allowed him to overcome that, and (then) he helped us overcome the pain we were experiencing. He was obviously scared, but the love was stronger than the fear.” Marin adds, “All it really takes is a little bit of compassion to go from a feeding tube to a normal life.

Caring for Gordon when his spirit was broken and watching his transformation into a happy, playful, lovable and loving boy ready to take on the world was an unforgettable experience. He touched the lives of every one of us who was part of that journey. Now, thanks to Marin and Martin (his wonderful new family), Gordon Freeman has overcome his pain and fear, and he’s finally living his best life surrounded by love, companions, and spectacular ariel views from a cat tree all his own. 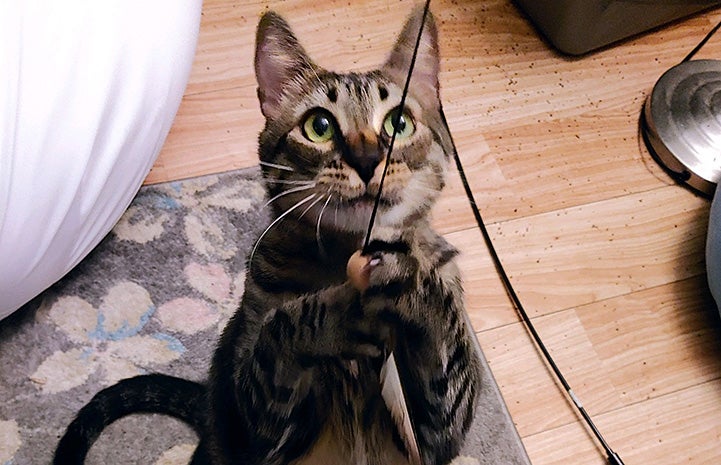 Ready to foster an animal and change a life?

Give a homeless animal the boost they need to get on the road to a happy life.

Foster an animal who needs you