Timing is everything for two cats with feline leukemia

Image
When Tasha met a pair of cats named Jasper and Drew, she fell in love. And though she couldn't adopt them right away, as soon as the time was right, she brought them home.
By Sarah Thornton 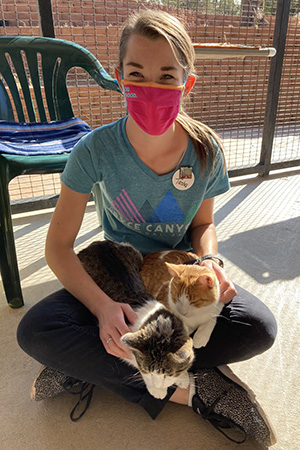 Sometimes, we meet animals, fall in love and want to give them a home, but the timing isn’t quite right. Maybe they need to be “only pets” or our housing situation stops us for some reason. For Tasha Fernley, it was sort of a mix of the two. On a volunteer trip to Best Friends Animal Sanctuary, she met Jasper and Drew, two cats who stole her heart. But she was living with her family at the time, and they already had a cat.

Normally, this wouldn’t be much of an issue. Jasper and Drew both got along well with other cats and had plenty of friends among their feline roommates. However, they lived in a special area of the Sanctuary for cats with feline leukemia (FeLV), a viral infection that weakens their immune systems. FeLV also makes them more susceptible to other illnesses and secondary infections, and it’s easily spread to other cats through close contact. So, moving in with a cat who doesn’t have the virus (as was the case with the family’s fluffy friend) was out of the question.

Until Tasha was able to move into her own space, she knew the time wasn’t right to offer Jasper and Drew a new home. Upon returning home from the Sanctuary, she would have to be content with only keeping the pair in the back of her mind and reliving the time she spent with them while volunteering.

Jasper tested positive for feline leukemia when he was just a kitten, and at 12 years old, he was the oldest cat in the special FeLV area. Being the oldest was an impressive feat because the virus is often most dangerous to cats who catch it when they are young. But he was healthy as could be, and everyone who passed through the building knew him.

Although he was one of the quieter cats in the room and had a reputation for being a little aloof with caregivers, he was always happy to climb into the laps of visitors and volunteers whenever he got the chance. He’d roll onto his back, ask for belly rubs and purr as loudly as possible.

Similarly, Drew was always looking for someone to give him attention. Originally a community cat living outdoors with many others, he was brought to the Sanctuary to be neutered, and ended up staying when he tested positive for FeLV. He couldn’t go back outside, because not only would it be risky to his own health, but also to the health of his feline friends. Veterinarians also discovered that he couldn’t produce his own tears, so he was given special eyedrops to keep his eyes healthy.

Being inside suited him just fine, though, because it meant that he could get all the back scratches and lap snuggles he wanted. Plus, he made lots of new cat friends — like Jasper.

While the two each had plenty of admirers, potential adopters overlooked them time and again. It can be difficult for cats with FeLV to get adopted, since they need to be the only cat in the home or any other cats in the home must already have the virus. The special medical needs of FeLV cats, along with Jasper’s advancing age, may have been daunting to potential adopters. But then, Tasha and her family came to volunteer.

“I walked into the room and saw Jasper, and he looked like a scraggly old man cat,” Tasha recalls. “I thought he was the cutest thing ever. Drew kind of muscles his way into everyone’s attention, so he was all over everybody. I ended up with both of them in my lap at one point and they were getting along really well … I just kind of fell in love.” 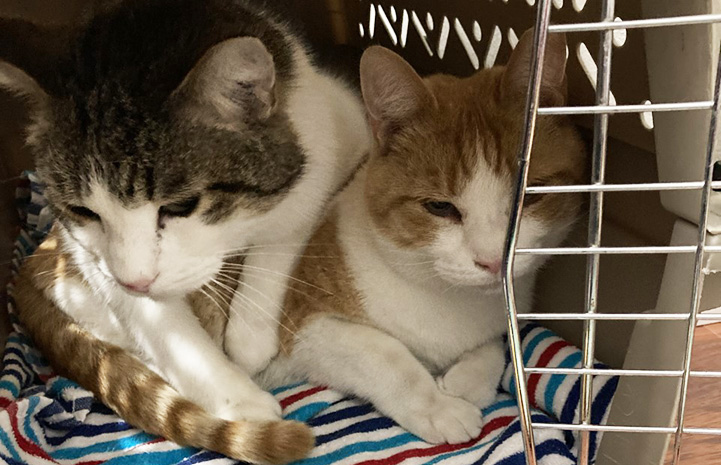 Tasha hadn’t planned on adopting a cat during that trip, and she couldn’t adopt Jasper and Drew anyway because of her younger sister’s cat. But months after returning home, she was still thinking about them, wondering if they would still be there by the time she found a place, or if they might be adopted by someone else.

“I was trying to house hunt, but that took a lot longer than I expected,” says Tasha. When she finally closed on a home and learned that both cats were still available for adoption from Best Friends, she didn’t spare another moment. The time was right to bring them home.

“Drew is kind of my little troublemaker,” says Tasha with a laugh. “I waited a while before I … brought the cats home, because I’m redoing this whole house, so it’s a construction zone right now. We’ve been redoing the floors, and the air register was off in one of the rooms … (Drew) got into the air ducts on his very first night home.”

When his first hangout spot didn’t work out (and after he’d been carefully extracted from it), Drew went in a different direction — right up on top of the kitchen cabinets. He got to keep that spot, at least, Tasha even added a bed up there for him. She says it’s still one of his favorite places.

Jasper was slower to get comfortable. He’d never really had a home, and ended up spending his first few days hunkered down inside his carrier. Luckily, he had a friend to help him adjust. “Drew would wander around and explore, and then he’d go in there and keep Jasper company for a while before he’d come back out,” Tasha says. “I think he was really helpful in pulling Jasper out of his shell.”

Once he’d left the carrier, Jasper’s adorable personality started to come out in full force. He’s grown attached to a couple of stuffed toys that he carries everywhere, meowing the whole time. Sometimes he’ll play fetch with them, but for the most part, says Tasha, he seems to just want them close.

The two cats watch her from the door when she goes to work and are waiting for her when she comes home. And with each passing day, Tasha is finding out more and more about their personalities and falling even deeper in love.

“I was kind of worried because I’ve never taken care of cats with preconditions or anything,” says Tasha. “So it’s been really rewarding to see how well they’re doing. It was really exciting when they started playing with me for the first time. They finally warmed up and were able to have fun and play and just be comfortable. They’ve realized that this is their space, this is their home and they’re OK here.” 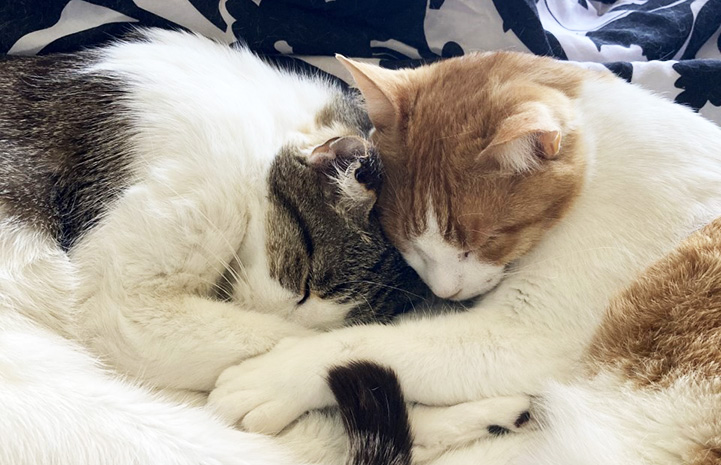 Is it the right time for you to adopt?

If you’re ready to give a special furry or feathered friend a home, homeless pets are waiting near you.

Declawed cat gets surgery for sore feet, then a new home