It’s an odd feeling when you’ve had pets your entire life and then suddenly your house is without a fluffy family member running around. The constant companionship and responsibility are easy to get used to and hard to get over. But an empty house (or empty nest, as it were) can offer unique opportunities to help pets having a tougher time finding homes.

After James Stone’s daughter moved out with the family dog, he was left with a very empty home. When the loneliness set in and it felt like something was missing, he began looking for a way to fill his house back up. That’s how he found Rico and Kelly, a pair of cats overlooked by adopters because of a medical condition that prevented them from living with most other cats. And these two were more than up for the task of chasing away the loneliness.

At Best Friends Animal Sanctuary, Rico and Kelly were well-known for their sweet personalities. Rico would greet visitors by rubbing and rolling all over their ankles and feet, and Kelly was always up for a nice conversation by meowing her funny little meow whenever someone talked to her. And though they most often hung out with different groups of their roommates, the two could still sometimes be spotted cozying up to one another.

They lived in an area of the Sanctuary specially set up for cats like them ― cats with feline leukemia (FeLV). FeLV is a viral infection that weakens cats’ immune systems and makes them more susceptible to other illnesses and secondary infections, such as upper respiratory infections. It is also easily spread to other cats, so it’s recommended they be kept separate from cats without the virus. Of course, that can make it difficult to find them homes, because many cat lovers already have a feline friend in the house.

Since James had no other pets at home, there was no need to worry about another cat catching the virus. So, when he started his search for feline companions, caregivers knew just who to recommend: a sweet pair of cats who were already friends. 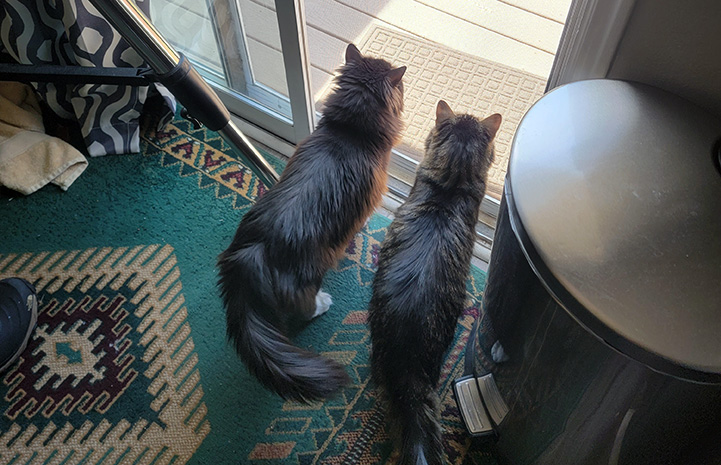 With Rico and Kelly around, it didn’t take long for a lonely, empty house to once again be filled with activity. Rico made himself at home immediately, while Kelly hid at first and when she finally emerged she stayed glued to James’ lap. “She insists on sitting on my lap any time I’m sitting down,” says James with a laugh. “And Rico just sits right next to me.” 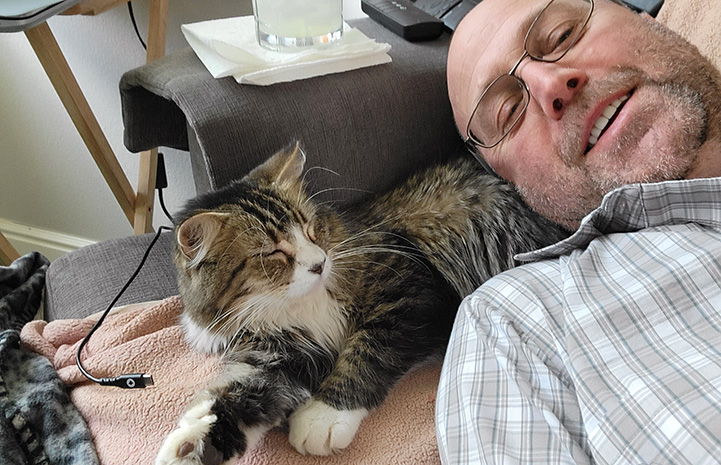 They follow him to bed, to the kitchen and all around the house. There’s never a moment when one of them isn’t around. “When I get home,” says James, “they’re both right there waiting for me. It’s nice. It’s nice to have.”

When they’re not snuggling up with their new person, there is still plenty to keep them entertained. An aquarium full of fish provides hours of watch time for the pair, as they perch on the side of the couch and stare at colorful fins and scales. It’s almost as good as TV, which Kelly also enjoys. “It’s the funniest thing I’ve ever seen in my life,” James says. “I turn on the TV, and she just sits right up on the edge of the couch and watches it.”

When Rico and Kelly are ready for some sunshine and a good breeze, they have a secure backyard where they can stretch out and roll around on the grass. “They love to go out on the deck and lay in the sun,” says James. “The first time they got on the grass, they did not know what to think about it. But now they’re used to it, and Rico thinks it tastes good.” 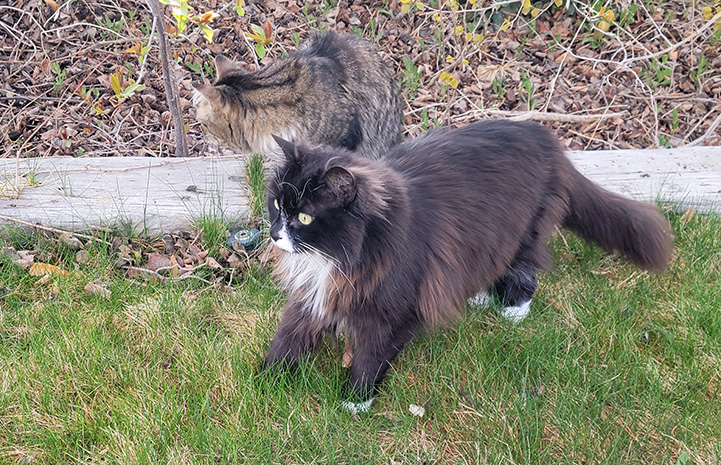 Recalling an especially fun outside moment, James says: “A butterfly was flying across the lawn, and I’ve never seen Rico move so fast and jump so high. He doesn’t really react to the kitty toys so much, but when it came to the butterfly, I swear that cat was five feet in the air, traveling at light speeds.”

While the two cats were always friendly with each other at the Sanctuary, they have become even closer since going home. They do almost everything together and, when it’s nap time, they snuggle up tight against one another. Kelly takes especially good care of Rico’s fur, grooming him every chance she gets (even when he gets a little grumbly about it).

With Rico and Kelly around, there’s never a dull moment. And the loneliness of a once-empty house has been chased away by the sound of two cats purring and tumbling over each other in play. “I love them,” says James. “They’ve given me something I just realized that I needed for a long time. Something was missing around here and now it’s not.” 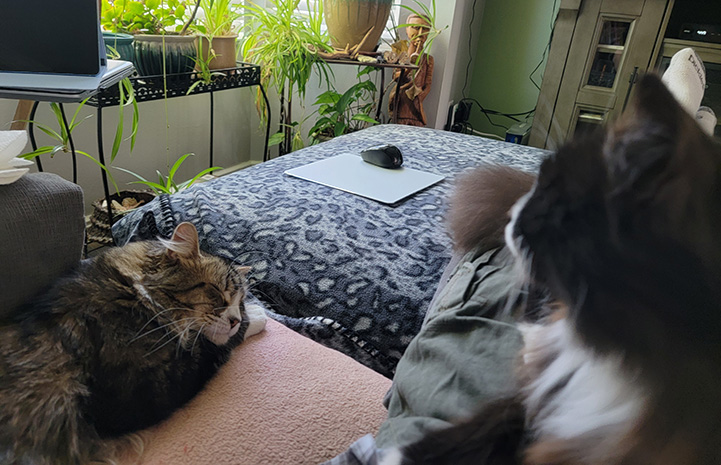 Fill your home with love

If you’re looking for a special fluffy companion, why not check out who is up for adoption near you?