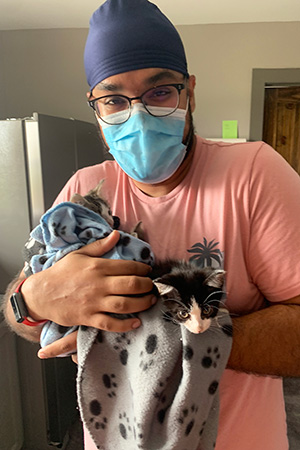 Ramandeep Singh used to pine for a husky dog, and perhaps he still does a little. But over the past eight months he’s become an excellent kitten foster volunteer and rock star helper at Best Friends Lifesaving Center in Bentonville, Arkansas.

While he was new to volunteering with animals, Ramandeep had never forgotten his childhood dogs and rabbits. He loved those pets so much that after they passed away when he was 13 years old, his family said there would be no more pets because he became too attached. Even though he couldn’t have more pets, Ramandeep never lost his love for animals (and he dreamed of that husky).

Years later, all grown up and working as a software engineer for Walmart in Bentonville, he was in a work meeting when he learned about Best Friends’ mission statement and its goal of making the entire nation no-kill for dogs and cats by the year 2025. Impressed by this vision, he signed up to volunteer.

Wanting to be actively involved in doing something good, he saw Best Friends as an organization that truly cared about the lives of animals — from the moment of rescue to the moment of adoption and everything in between (medical care, enrichment and socialization).

He didn’t know he liked cats. He was fascinated by them, yes, having seen cat videos on Instagram and a cat named Ice Cream who appeared in video chats with a friend. But Ramandeep hadn’t interacted with cats in person and his impression of them was that they were mercurial: “Hey how are you” one minute and “I don’t care” the next, wanting to show you their bellies like they want to be petted, but then they’re like “Don’t touch me.”

That does sound about right.

Though he was nervous at first about being around cats, he didn’t want to miss the opportunity to be involved with Best Friends. So, he went to a Saturday orientation session for new volunteers at the center and his journey began. Veronica Weber, supervisor at the center, noticed that Ramandeep was curious, and that cats were creatures he hadn’t had much experience with. She also observed that this lack of experience didn’t deter him.

That first Saturday he was there to help clean. As he was sweeping the floor in one of the rooms, the cats were rubbing up against his legs. He was both smitten and intrigued. In one room, the broom was hitting the cat toys, spinning them across the floor, and Michelle, the kitty in residence, saw this as in invitation to play, which led Ramandeep to stop cleaning, sit on the floor and cuddle with her.

She curled up in his lap. He was startled by the thought that he should still be cleaning. (This was his first day, after all.) He carefully helped Michelle off his lap and finished his work. But he didn’t rush off. He stuck around for a while and spent some time with her. This became his habit: Whether cleaning or helping to host adoptions, he would stay late after his shift to spend time with the cats.

One busy Saturday, a staff person was preparing to greet people coming to the center to meet adoptable pets. At the same time, she was also caring for some sick kitties. Since no one had signed up to volunteer that day, it looked like she would be on her own. But sure enough, Ramandeep stopped by to see if he could help, and ended up taking care of anything that needed to be done. He saved the day. 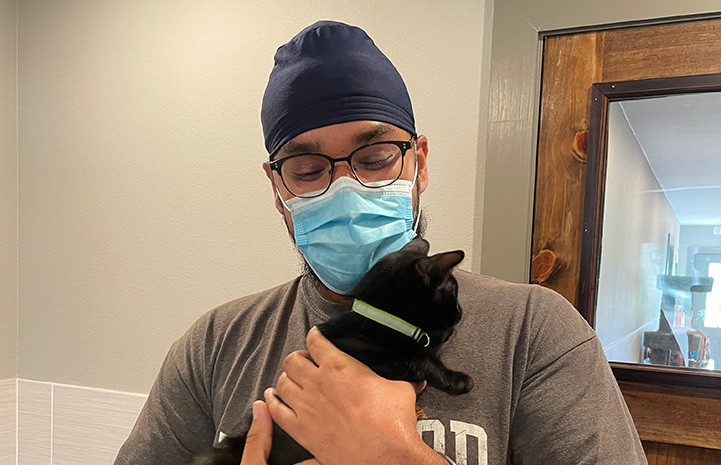 Veronica noticed that Ramandeep paid attention to detail, asked lots of good questions and was willing to do whatever was needed, even if the task was new to him. Eventually, he volunteered in every area: cat care, adoptions, animal transports, events and even kitten fostering.

Since he didn’t have a lot of experience with cats, there was a learning curve, particularly with his first litter of foster kittens. His foster charges — Cinnamon and Nutmeg — were playing while he was working. As Nutmeg padded up and sat on a laptop computer, Ramandeep noticed something odd that sounded like a breathing problem. Alarmed, he used his phone to record the noise and send it to Best Friends foster team members for some guidance. The puzzle was quickly solved: The kittens were purring. They told Ramandeep not to sweat it. This was a good sign. 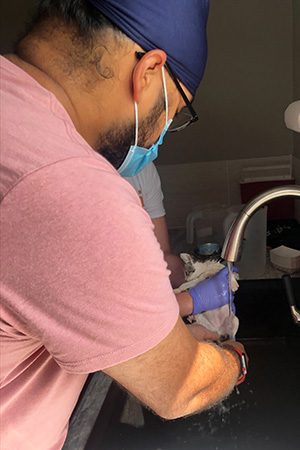 Ramandeep was relieved to know that Nutmeg was feeling relaxed and happy in his home, but he was also curious. He started reading up on cat behavior, happy to keep learning. It wasn’t long before his first two foster kittens were adopted.

He had done such a good job with the first batch of kittens that when Best Friends took in three tiny kittens (only about two months old) from a shelter because all the other available foster homes were full, Veronica asked Ramandeep was interested. He said yes, of course. With this litter, he not only learned to bathe kittens, clip their claws and administer dewormer, but he also posted their information online, which resulted in them being adopted.

The joys of fostering 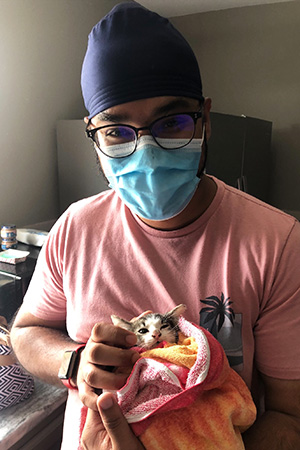 Ramandeep loves the changes that cats bring to the daily routine, as well as the moments when he’s connecting with them. He usually goes to bed late and wakes up late. But his foster kittens — peppy and alert in the morning — don’t turn into sweet little fur slugs until closer to noon. So, he began hopping out of bed (sans alarm) at 6:30 a.m. for play time. By around 9:30, when he needed to start his work as a software engineer, his kittens were cruising towards sleepy mode.

He usually works in a small office space. But when Nutmeg, a kitten from his first foster litter, kept crowding him and wanting to be in his lap, he began working from the living room. Now Nutmeg has space to sleep next to him on the couch.

Ramandeep usually gets into his car and turns the music up loud, but when he’s transporting cats, he leaves the music off so that when he hears the first meow from a passenger, he’s ready to meow in response. The conversation usually continues for the duration of the drive.

He usually leaves the house for dinner dates without a second thought. But one weekend night when he had plans to meet friends, the three six-week-old kittens he was fostering continued to meow after he shut the door to their room. He sat frozen in the darkness near the door, afraid to leave them. After 40 minutes or so, the meowing stopped, and he heard the playful scuffle of kitten games. He ran to his friend’s, ate quickly, said he had three babies back at home and returned within an hour and a half.

He loves other small moments, such as the pitter-patter of rushing kitten paws the moment he opens a can of food, or the blinds being transformed from mundane necessity into a kitten toy. He loves that mischievous kitten nature and how ornery they can be. And then there’s the purring.

Part of a good cause

Ramandeep says that one of the first things he learned was that a good life for an animal starts with a good human-animal interaction. The cats must be able to trust people. This motivates him to volunteer every week. He wants to be the person with whom the cats have good interactions, so he can help pave the way for them to have happy lives in homes.

Ramandeep is thinking about adopting a cat one day, but for now, he’s content to volunteer, be a foster, and build his knowledge and confidence. He loves getting one-on-one time with the cats, stories of people who come and adopt, and knowing the cats have found loving homes. He knows that he could simply donate money to the cause, and that that would be a good thing, but he loves everything that comes with being actively involved.

Maybe a husky is still in his future, but for now he loves being part of this good cause. During the work week, he counts down the days, looking forward to his volunteer shift and to the next litter of foster kittens. 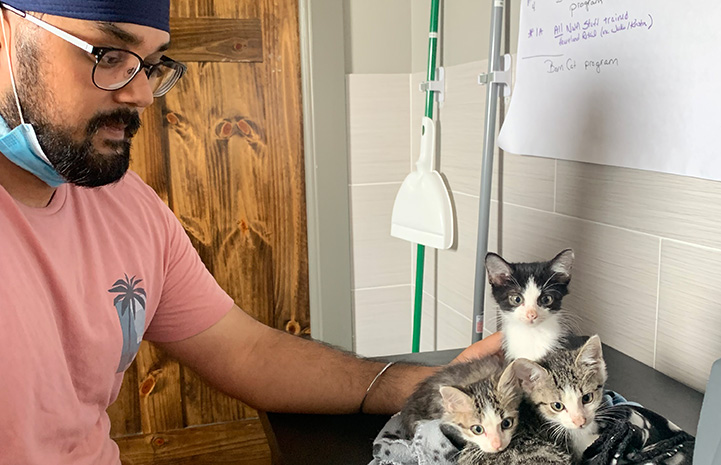 Learn something new, get involved and help save lives while volunteering and fostering pets from your local shelter.