Bill Philibert never imagined that his 100th birthday celebration would last for well over a month. Nor did he imagine that he'd spend several of those festive days volunteering at Best Friends. It was Bill's youngest daughter, Juli, who arranged a trip to the Sanctuary as a surprise.

Juli and her husband live in Fairbanks, Alaska, but they travel to Best Friends to volunteer on a regular basis, and are planning a move to Kanab. Juli knew her father would love interacting with the Sanctuary animals. She also knew he would not mind being put to work. Bill is no stranger to volunteering. He did quite a bit of it in his earlier years, even some first aid for the Red Cross. He's also been a lifelong animal lover and has had a variety of pets over the years, including cats, gerbils, bunnies, snakes, turtles and canaries.

Though Bill's actual birthday was in February, it was late March when he arrived at the Best Friends Welcome Center, escorted by Juli and his older daughter, Dory. After Bill sat down at one of the tables, nearly a dozen staff and visitors gathered around to sing "Happy Birthday" to him. And, although Bill says he's been a pretty private person all his life, he was clearly pleased by the reception and didn't mind being a celebrity (and wearing a "Birthday Boy" sticker) for a day. 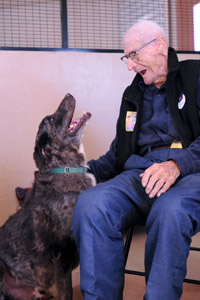 After a leisurely lunch at the Village Café, Bill and his daughters spent the afternoon volunteering in the Old Friends section of Dogtown. Their various tasks included cleaning, breaking training treats in half, and bonding with dogs Tagger and Earl. A few days later, Bill and his daughters descended on Cat World to help with socializing and grooming.

One thing's for sure: Whether he's at Best Friends, or back at his home in Houston, Texas, Bill stays active. Before he retired, he had a decades-long career as director of operations for distribution at the Houston post office. Now, he drives a four-wheeler when he's out running errands, and he goes out to lunch and dinner with several active social groups.

No slowing down for centenarian

He may be a centenarian now, but Bill doesn't have any intention of slowing down. He says that his personal doctor predicts he'll live to 104.

Asked about his volunteer experience, Bill said that when his daughters told him about the trip, he had no idea what to expect, but that it was a wonderful surprise and he enjoyed every minute of it. And to his fellow centenarians, or those aspiring to reach that milestone, he says, "You're never too old to volunteer."