Image
See photos and videos of animals - pigs, parrots, puppies and a pony - enjoying some holiday joy this season.
By Kelli Harmon

This can be a hectic time of year with the pressure of gift-giving, parties, baking, traveling (and so on). Well, take a break from all that and look at how we’re celebrating the holidays with the animals at Best Friends Animal Sanctuary, our adoption centers and a few places in between.

1. This guy’s face is how we all feel about cats.

People came out in droves to adopt pets between Black Friday and Cyber Monday, when Best Friends had adoptions for as little as $10. Here’s Epiphany, a kitten about to go home with his new dad. The look on his face is what you get for bringing home not just one, but two kittens for the holidays. Epiphany was adopted along with Valentino, a shy kitten who was heartbroken because his sister was adopted before he was. Now he has a new kitten to grow up with, as well as a family who loves him. 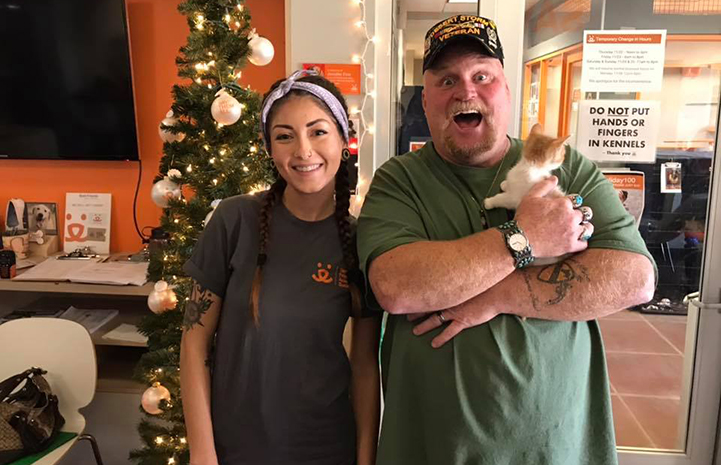 Walking a pig is much easier than herding cats You just need plenty of almonds and then you need to let go of the idea that you’re going to be in control. Taking pigs for a walk is one of the most coveted volunteer shifts at the Sanctuary. Just after Thanksgiving of this year, some volunteers came all the way from Hawaii to celebrate with the animals in the southern Utah red rock desert. It sounds like it was worth the long flight for the pigs alone.

3. Dogs steal the scene at the L.A. Auto Show

People might have come to the auto show in Los Angeles to see what’s hot in cars, but a car won’t greet you at the door when you get home, cuddle up with you on the couch or give you sloppy kisses in exchange for kibble. This year, Best Friends had adoptable dogs at the show, and they were a huge hit. 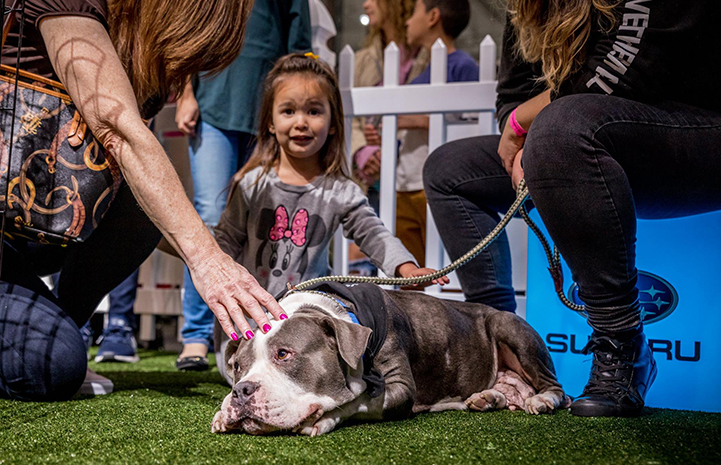 Daisy Dukes is eight years old and she is a kissing machine. She met every person who came into the booth — whether they wanted to or not. She let kids hug her, kiss her and spend as much time as they wanted with her. She was a great ambassador.

4. The gift of saving pets during the holidays

Now this is a great way to celebrate the holidays. No two days are alike in animal rescue and animal welfare. And it doesn’t slow down in December. So many people step up to help, and when confronted with these furry faces in need, how could anyone say no? After all, what brings more joy than saving lives? 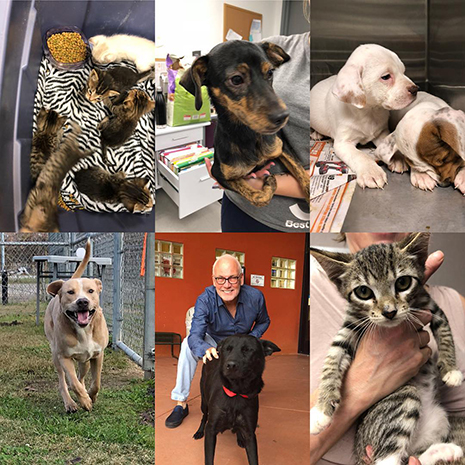 5. Patrick Fabian and puppy: Caught under the mistletoe

Giving Tuesday turned into a day for getting puppy kisses from Moonbeam, the sweeter-than-sweet puppy from Best Friends in New York. Not long after her photo shoot, she got just what she wanted for the holidays — a new home. 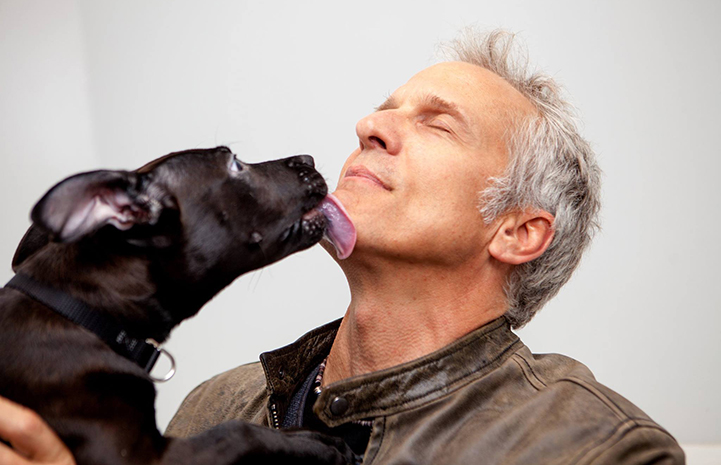 Actor Patrick Fabian stopped by to give some love to our pups on Giving Tuesday. Show him some love back by checking out his new movie, DriverX, released December 7. Bonus points if you can spot him wearing some Best Friends gear in the trailer!

6. Holiday feast for a tortoise

What do you get for the tortoise who has everything? Food. The answer is food. Agate and his tortoise friends got strawberries, peppers and cilantro as special Thanksgiving treats. Then, with their bellies full, they fell asleep on the couch while watching football. 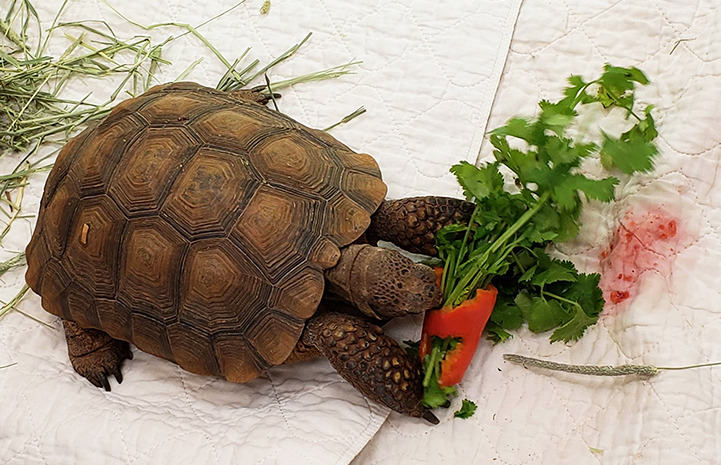 All Agate left behind was a strawberry stain and that piece of cilantro stuck on his face.

Walking puppies and cleaning kennels is way more exciting than shopping, wrapping presents, baking cookies or decorating. Best Friends is saving lives each week by transporting pups from crowded shelters to places where they get adopted in a snap. Volunteers make that possible by helping out at pit stops, or (rather) pup stops. 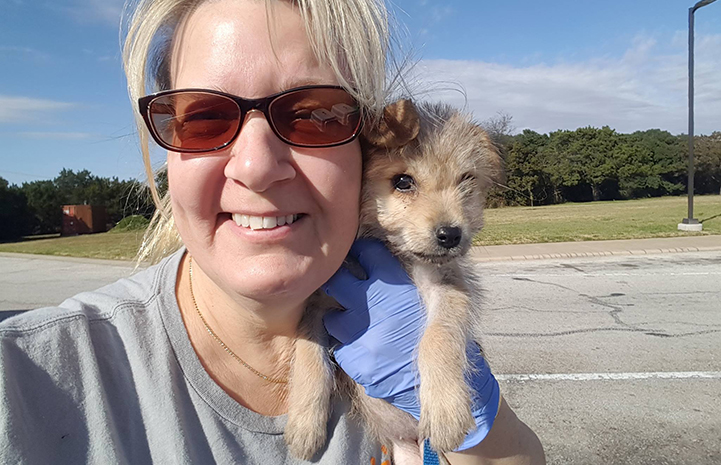 My daughter and I volunteered today! Anna and Erin were transporting 31 puppies from Houston to New Mexico and needed help at a rest area in Kerrville, Texas. It was a beautiful day to walk, water and love 31 puppies! We did fall in love with a few, but we know they're on their way to their furever homes.

8. Sharing the love in Utah

Sharing is caring, right? Well, homeless pets got some special gifts from a place that cares for creatures that are more finned than furred. ‘Tis the season for loving and helping all creatures, and staff from an aquarium not far from the Best Friends Pet Adoption Center in Salt Lake City delivered loads of goodies for dogs and cats. 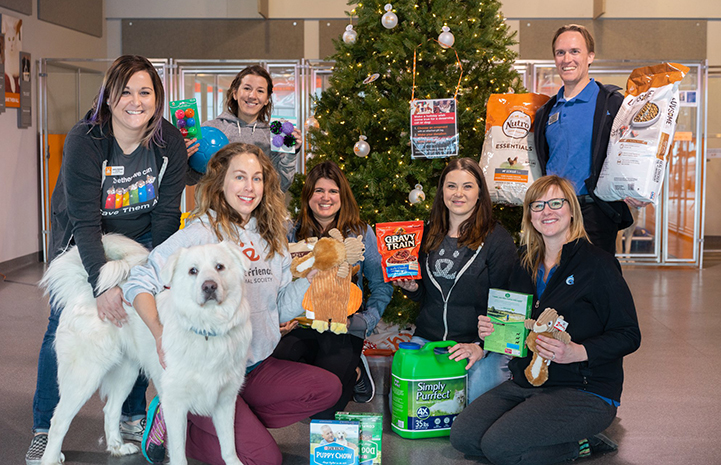 9. Adopt a cat: They look great on Christmas cards.

Talk about photogenic! Charlie got adopted just before the holidays — in plenty of time to debut on his family’s Christmas card. 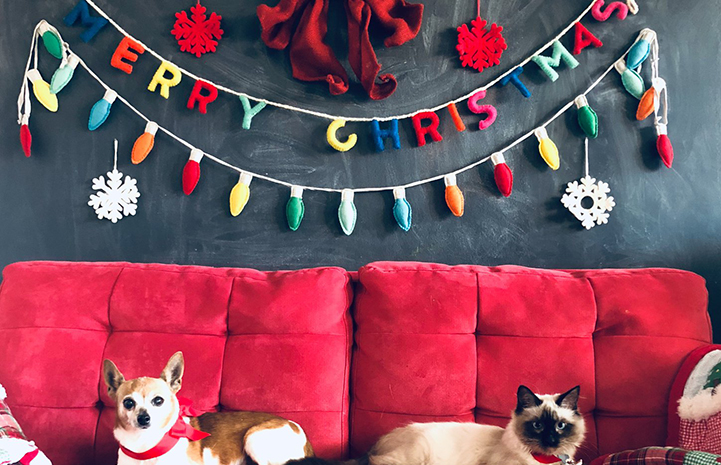 Charlie is doing great! We all absolutely love him. He truly is a special cat. He’s so social and loves being around my three kids. Here’s a picture (taken for our Christmas card) of him with our 16-year-old Chihuahua.

Comanche the pony likely spent most of his life giving rides to little kids and putting smiles on the faces of hundreds of horse-crazy girls and boys. He retired to Best Friends (when he was no longer rideable) and received just what he deserves — a new home where he’ll be pampered for the rest of his retirement. 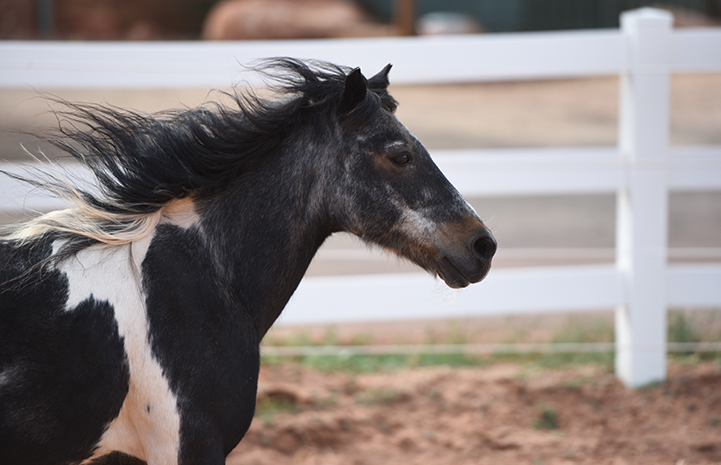 Comanche is thankful for his new home this Thanksgiving! And we're thankful for all of you who make it possible for us to help ponies like Comanche.

11. You either love or hate Christmas music. This bird casts his vote.

Did you ever notice how many birds are mentioned in the song called “Twelve Days of Christmas?” Well, Milo the macaw did, and he’s dancing to every verse.

While humans may not be quite ready for Christmas music, our birds are more than happy to dance to the holiday tunes! Milo made sure and show off his moves.

Need gift ideas? Sponsor a pet for a loved one.