Veterinarian Megan McCarthy had only been on the job with Best Friends for two months when she encountered an emaciated and severely dehydrated 14-year-old cat named Lyla, who was surrendered to a local shelter and then transferred to Best Friends in Salt Lake City in dire condition. “Lyla was one of the most dehydrated, skinny cats I’ve ever encountered,” Dr. Megan recalls. “Her eyes were really sunken, and she had no fat at all. She was just skin and bones.”

Lyla was so sick, in fact, that her full intake exam was postponed until she could be stabilized. But initial bloodwork showed that she had hyperthyroidism, a condition that causes her metabolism to go into overdrive and make it impossible for her to gain weight. Dr. Megan prescribed a thyroid medication, administered IV fluids for dehydration and decided to take Lyla home to keep an eye on her. 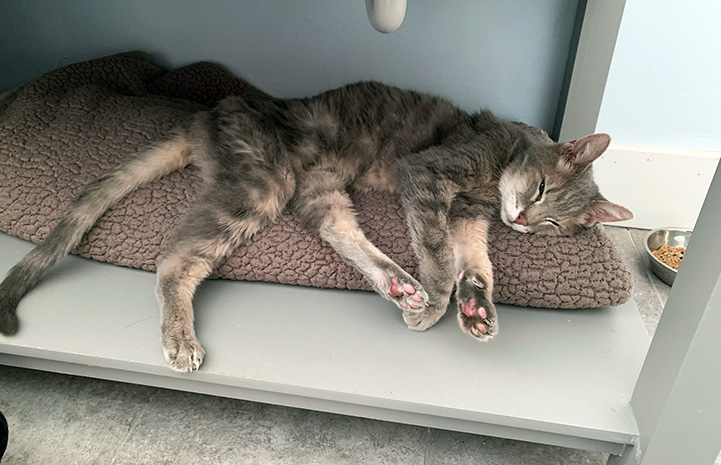 Lyla was the first cat Dr. Megan fostered at Best Friends and she says she was glad to do it: “She required intense medical care and she just tugged at my heartstrings. It was late in the day when she arrived, and I didn’t want her to stay her in a kennel alone in the shelter, so I decided to take her home. She was just so sweet. She lounged on a big fleece blanket we gave her, just purring and making biscuits and accepting pets.”

Over the next week, Lyla had bouts of nausea that required additional medication, but overall, her appetite and demeanor were good, and she managed to put on some weight. Things were definitely going well, but now that the patient was stabilized, Dr. Megan was eager to do bloodwork to get a comprehensive health picture; so, a week into her recovery, she took Lyla back to Best Friends for a full examination. 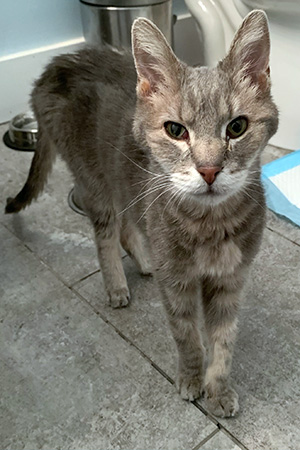 Dr. Megan emphasizes the importance of closely monitoring the bloodwork of an animal on thyroid medication, as well as keeping an eye out for liver disease. “Obviously, we want that thyroid value to come down, but we also need to keep a close eye on her liver and kidneys because a rare side effect of that medication is liver disease. And a more common thing is that once you start regulating the thyroid and get the metabolism under control, sometimes in older cats you can unmask kidney disease.”

Since Lyla was 14, Dr. Megan knew that she was already susceptible to kidney disease, and the lab tests confirmed it. So, Lyla was put on a prescription diet and progress was monitored through subsequent blood tests.

“That was all going well (and) her thyroid was going down, but then on the second or third time when she came in for bloodwork, her liver values were extremely elevated,” says Dr. Megan. “I’ve never had a cat react that poorly to the medication. Thankfully, I had been watching her closely and she was still eating so we caught it very early. When the liver values are that high, it’s most likely due to the thyroid medication, so we stopped the medication.”

It was clear to the doctor that Lyla’s evolving condition required a new approach, so she began working on a new plan. The options for treating hyperthyroidism in cats are medication, surgery, diet or radioiodine treatment. Given Lyla’s other medical challenges, it was determined that radioiodine treatment was the best option. It requires a single injection and according to statistics from the Cornell University College of Veterinary Medicine, it has a cure rate of approximately 95% to 98%.

Lyla went to a nearby specialist for the injection, which was followed by several days of monitoring at the clinic until her radiation levels were low enough for her to be released. She handled the treatment well, and after being discharged, she went back to Dr. Megan’s home to continue her recovery.

Over the next month, Lyla continued to improve. Her thyroid levels following treatment had fallen from an alarmingly high level of 20 to a normal range of 2.4, and her kidney values were holding steady thanks to her new diet. She also gained a full two pounds and from her appearance and behavior, it was clear that she was out of the woods. By late June, she was healthy enough for adoption and the hunt for a home commenced. 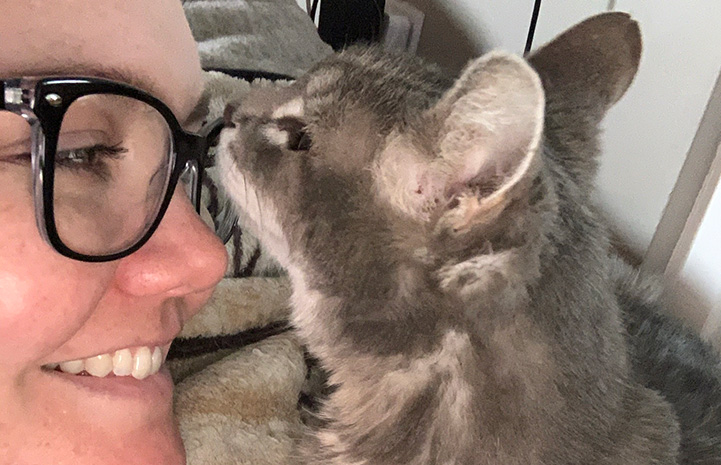 Ready for a new life

The timing couldn’t have been more perfect. Julie and Christopher McBeth were just beginning their search for a cat, specifically a senior. Cats had been part of the mix throughout the couple’s marriage, but in April their house became empty for the first time in years with the death of their beloved cat, Freia.

Adopted by the McBeths as a kitten in 2001, Freia lived a good life. But her absence was palpable. “I didn’t realize how much energetic space they take up until she passed,” says Julie. “The house felt so empty.”

Even though they were heartbroken at the loss of Freia, the McBeths were also grateful. They knew that since she was nearly 20 years old, her time was winding down and they were determined to make the most of it. So, while working from home during the pandemic, they were able to spent her last days by her side. “You’re very present to the fact that every moment you have with them is something to cherish,” says Julie.

Because of that profound experience (and in Freia’s honor), the McBeths agreed to open their home and their hearts to an older cat, perhaps even one with medical needs. 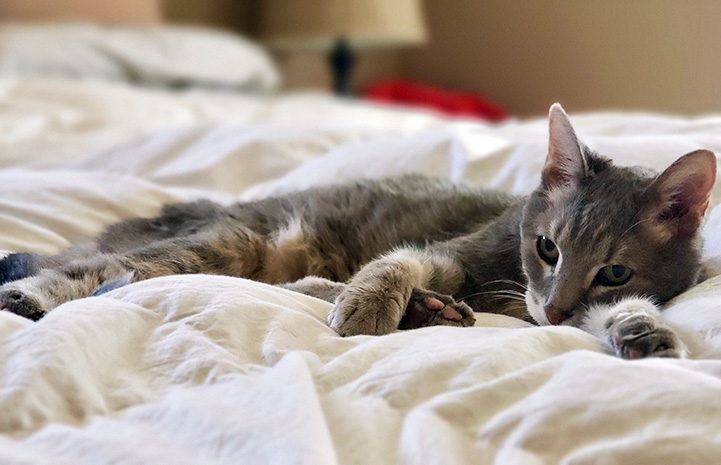 Once that decision was made, and after spending a little time looking at adoptable cats on the Best Friends website, it didn’t take long for them to agree on a perfect candidate. They wanted to meet Lyla. Within days, a video meet-and-greet was scheduled and by the end of the call, it was clear that Lyla was the one.

Her transition into a new home with a new family has been seamless. “She settled in really quickly,” says Julie. “Within a couple of days, she wanted to be wherever we were and within a month, it was her house. And she’s so playful! Every now and then we’ll look at each other and ask if we’re sure that she’s 14.”

With her health restored and with a loving family to call her own, Lyla’s best days are ahead of her, and that is due in no small part to Freia. “I feel like, in a way, Freia guided us to Lyla,” says Julie. “She prompted us to start looking.”

When asked about the decision to adopt a senior cat, Julie is resolute. “I can already say that it will have been totally worth it if we have a month or if we have many more years with her. We are thrilled to be given the care of Lyla and we look forward to however much time with have with her. We will treasure it.” 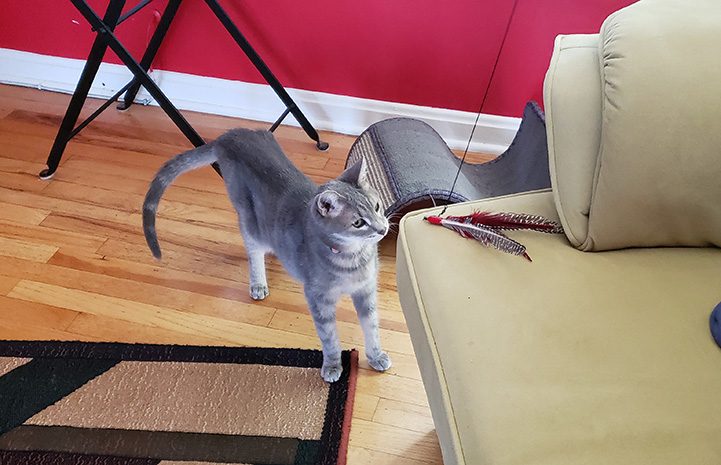 Give a cat or dog a new lease on life

There are pets of all shapes and sizes in shelters and foster homes near you, just waiting for someone to pick them. You can change their lives and bring joy to your home, too.

Adopt an animal near you