Image
Severe spondylosis landed Hazel in a shelter, but now she's living her best life with her new dad.
By Kristi Littrell

“Hazel’s my daughter, simple as that,” says Ryan Hoo. Ryan’s newly adopted “daughter” is a two-and-a-half-year-old, 143-pound mastiff named Hazel. She loves swimming, sitting on people’s laps (even though she might be bigger than they are) and napping on the couch. “She has the personality of a stubborn tween,” Ryan says. “When you pick up a stick to throw it for her, it can’t be a small stick. It has to be a branch, otherwise she’ll refuse to play with it.” 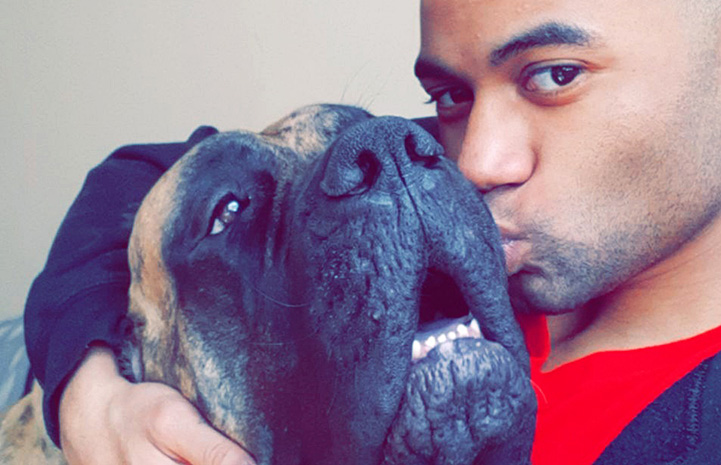 Mastiff in a shelter

Hazel came to the Best Friends Lifesaving Center in Salt Lake City from the animal shelter in Tooele City, Utah, after having a litter of puppies. Staff noticed that as Hazel moved around, she yelped in pain, which seemed to worsen each day.

When Best Friends veterinarians examined her and took X-rays, they discovered that the source of her pain was severe spondylosis (arthritis of the spine) and bone spurs. There was no cure, but with the right combination of medications and veterinary care, Hazel started feeling better and no longer cried out in pain.

Hazel had already been through a lot in her young life: raising puppies, living with unmanaged pain and losing her home. She was ready for a fresh start. The Best Friends foster team placed her in a foster home that didn’t work out because one of the family’s children was afraid of giant Hazel. Staff also found out that Hazel isn’t good with small dogs, and since just about all dogs are smaller than her, that would limit her options for the right home, too. 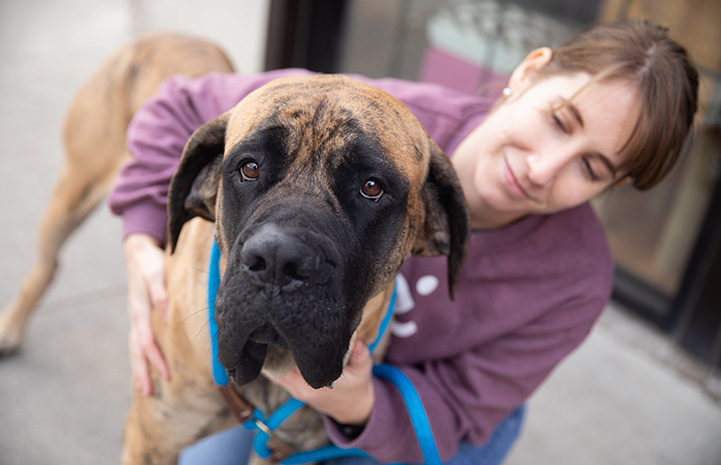 The moment he met her, Ryan loved Hazel’s larger-than-life personality. When the foster team sent Hazel home with Ryan on a foster-to-adopt basis, they were prepared for the possibility that it wouldn’t work out. Hazel is a lot of dog, and things just hadn’t worked out for her for most of her life. But for Ryan, who has no other pets, there was no question. Hazel wasn’t going anywhere.

Ryan says, “Along with Hazel’s layers and layers of rolls are her layers and layers of personality.” As she settled in, Ryan learned that she loves the outdoors, running after her ball and sitting on people. “Whether I’m on the couch or on the ground,” he says, “Hazel wants to be in my lap. She knows she’s large, but has that look of ‘See? I fit.’ Sometimes we both fall over, and she’s got that ‘Did I do that?’ look on her face and you can’t help but laugh.”

Hazel also has a stubborn streak. She enjoys walks but when she plops down in a shady spot, she won’t budge until she’s had a sufficient amount of pets and tummy rubs. Because of her arthritis, Hazel is limited as to how far she can walk and run. But swimming is a great option for exercise. So, Ryan and his girlfriend, Shandiin, took Hazel to Mona, Utah, for a week. The area is known for its crystal-clear swimming holes.

Hazel spent the week splashing in the water, swimming after her ball and paddling with her people. “She loved it,” Ryan says, beaming with a dad’s pride. Of course, Hazel has her own way of swimming, too. “She’s a bit like a shark,” Ryan says. “When she catches you, she tries to swim on top of you, but out of love. She’s my Hazel Basil.”

Adopt a (big or small) pet near you 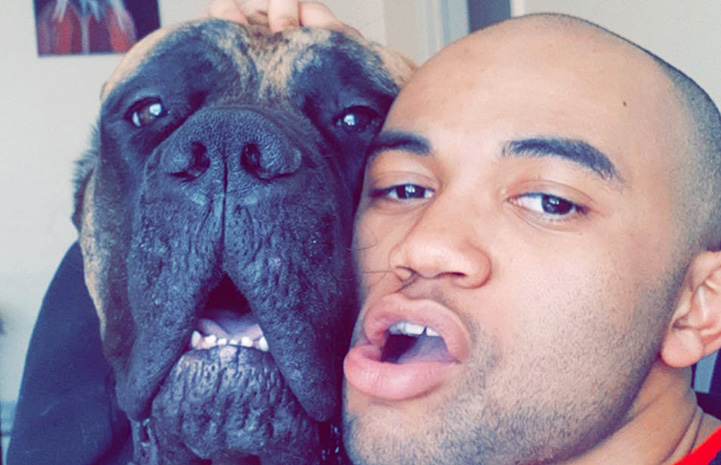 Best Friends in Utah works collaboratively with animal rescue groups, city shelters and passionate individuals who are all dedicated to the mission on making Utah a no-kill state. As part of this mission Best Friends hosts adoption and fundraising events, runs the Best Friends Lifesaving Center in Salt Lake City, operates a spay/neuter clinic and leads the No-Kill Utah (NKUT) initiative. Together, we will Save Them All.