Image
Rescued hoarded cats, 67 in all, some of whom have FIV and other illnesses and are shy, comes to the Sanctuary for help.
By Christelle L. Del Prete

At first it seemed like Abby didn’t like people. The pretty tabby-and-white cat shied away from her caregivers’ hands when they tried to pet her. She watched everyone with suspicion and would barely touch her food. Abby was one of 67 cats living together in one house before they were seized by animal control and brought to the safety of Best Friends.

Abby has made great progress since she arrived. The dozens of other cats who came with her are all getting TLC to help them with whatever they need for health and happiness. The best time of their lives has finally begun.

At approximately 10 years old, Abby is one of the older cats in the bunch. She has clearly seen a lot in her life, and the overcrowded home may have been the only safe haven that she and the other cats ever knew.

Since Abby arrived at the Sanctuary, Cat World caregivers and dozens of dedicated volunteers are working to ease her transition. In response, Abby has been willing to put the past behind her and to give people another chance. Though she may initially retreat under her bed when people reach into her enclosure to pet her, she’ll soon step out and lean into chin scratches. She loves to be brushed so much that she starts purring the second the soft bristles touch her fur. And she’s eating better now, too. She just needs a little encouragement.

Not all of the cats have warmed up as quickly as Abby, so caregivers and volunteers go slowly with those who aren’t ready for more. Persephone, a little brown tabby cat, is far more skittish. But even she is becoming increasingly curious about people. While she used to hide under her bed or behind the cat tree when people were in her room, she’ll now come out and use the scratching board or take treats placed on a blanket in front of her.

Every time Persephone doesn’t run and hide when someone walks in her room is a step forward. While she may not start eating out of people’s hands or jumping on their laps anytime soon, there are plenty of signs that she’ll come around. 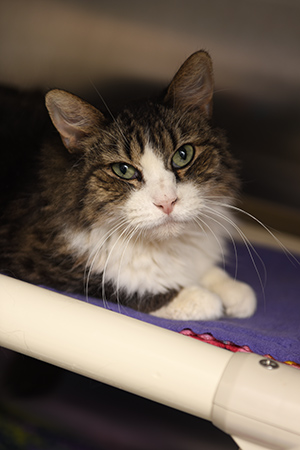 Besides socializing the shy cats, caregivers, volunteers and Best Friends vets are working to get all the cats healthy and ready for new homes. Illnesses can spread quickly among cats in overcrowded environments, so many of these cats need treatment for common illnesses, such as upper respiratory infections and ear mites.

Hildegard, Lorenzo and Samira, three of the rescued cats, have feline immunodeficiency virus (FIV), but they are all feeling great and doing well in their new room at Cat World.

FIV weakens cats’ immune systems and makes them more susceptible to secondary infections and dental disease. While it might sound serious, cats can live long, healthy lives with FIV. Since spreading the virus is not easy, cats who have it can live with cats not infect with the virus ― as long as they aren’t likely to bite each other.

Walter has more health troubles, including not only FIV but also kidney and heart disease. He’s in the perfect foster home with a Best Friends veterinarian, where his medical needs can be closely monitored and cared for.

Meanwhile, the list of medical treatments needed for the whole group of cats is long. Aphrodite, a Siamese mix, is getting nebulizer treatments for an upper respiratory infection and help for a teary eye.

Abby needed treatment for ear mites and an upset tummy, while a trio of adorable eight-week-old kittens are still in quarantine until they beat their respiratory infections and receive their kitten vaccines.

Despite the cramped conditions in their former home, many of the cats were in surprisingly good health. Some have already been placed with a Best Friends No More Homeless Pets Network partner in Utah that will work to find them loving new homes. Others will go to network partners in Colorado, and the rest will stay at the Sanctuary until they are adopted.

That shouldn’t take long for eight-week-old Ladybug, a tortoiseshell kitten who really is as cute as a bug, and her two siblings: Honeybee, a red tabby male, and Grasshopper, a brown tabby.

As for Abby, someone is sure to fall in love with the way her big green eyes are framed by dark lids that look like perfect cat’s-eye eyeliner, or with her unique leg markings (one of her front legs is white and the other has tabby markings).

Though the cats share a sad past, life is getting better every day. And this is only the beginning, because now they have bright futures as they begin learning what it means to have all the love and care they could ever want.