Image
Seniors are the best, give them a try! November 8, 2010
By Best Friends Animal Society
By David Dickson

People ask Michelle Arlotta all the time why she decided to adopt a 15-year-old dog. "Why wouldn’t I?" she always responds. Michelle has a soft spot in her heart for seniors like Kimbo, the 15-year-old dog she fell in love with while staying at the Sanctuary. "I’m a sucker for older animals," she explains.

November is Adopt-a-Senior-Pet month. As practically any adoption event will prove, puppies, kittens, and other baby animals don’t usually have as hard a time finding homes. There never seems to be a shortage of people who go gaga over puppy dog eyes. Still, the senior animals have a whole lot going for them as well. November is as good an excuse as any to give them a little more of their deserved time in the spotlight.

The many and varied benefits of living with senior pets are obvious to those who have had one in their lives. Still, in the spirit of shining that spotlight front and center, here are a select few of their bragging rights: For one thing, senior pets are usually lower maintenance. They sleep all the time! Their personalities are more established, thus eliminating a lot of the guesswork that goes with a young animal. (There’s much less chewing and other rambunctious youthful habits.)

All of those benefits pale, however, to perhaps the number one reason why senior pets are so terrific. "They tend to be more grateful for their homes," explains Best Friends adoption coordinator Kristi Littrell. "They just want to be part of the home." In other words, do you want to be a hero? Adopt a senior pet. They’ll be so thankful, you won’t help but realize you’ve done something special. Those senior pets know how to love like no other. 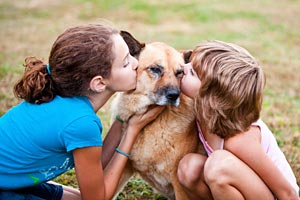 Back to Kimbo for a minute, he was a 15-year-old dog who came to Best Friends four years ago after his person passed away - that had been his only home. Kimbo had a shy, sweet way about him that caught the attention — and the heartstrings — of many who spent time with him. (One visitor, in fact, decided to set up a Facebook page specifically aimed at finding Kimbo a home.)

When Michelle Arlotta of Frenchtown, New Jersey, met him, she fell in love at first sight, though it would be several months before she could adopt. Now that she has brought him home, she couldn’t be happier. "He’s amazing," she says. "I’m totally in love with him." That love is certainly a two-way street. Kimbo stays at her side every minute he can.

Michelle knows older pets can take a little extra work, such as Kimbo’s three medications a day, but for her it’s a labor of love. She also realizes she won’t have as much time with him as she might with a puppy. That’s alright by her, though. "You treasure each day," she adds.

The word is certainly getting out that senior pets are incredible. Alan and Lynn Kough from Chandler, Arizona, have been adopting senior dogs from Best Friends for years. Things all began in 2006 when they visited the Sanctuary to meet a 10-year-old Pomeranian named Toto.

During that visit they adopted not only Toto but Toto’s best buddy Randy as well. Since then, they have continued to work with Kristi Littrell on finding senior dogs to bring into their family. Several have passed on during the years, and the goodbyes are never easy, but the couple always comes back looking for another life to help. 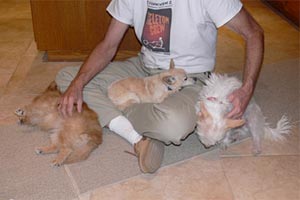 Just this past week — the perfect kickoff for adopt a senior pet month! — they adopted three more senior dogs: 10-year-old Teddi, who came from a hoarding situation; 14-year-old Munchkin, whose previous person passed away; and 10-year-old Precious, who came from a Los Angeles shelter.

All three seniors made a seamless transition to their new home. They acted immediately as if they belonged and couldn’t be happier with their new family. These latest three make 10 dogs now that the Koughs have adopted from Best Friends. "We give them the best last years of their lives as we can," says Lynn.

When asked what makes senior pets so great, Alan explains things simply enough. Though he and his wife Lynn also love puppies and kittens, they discovered long ago what they enjoy most about their pets are the individual personalities. And by adopting older pets, that personality truly shines through. He has the perfect analogy to demonstrate. "Would you rather pick your spouse as an adult, or have your parents arrange your marriage when you’re still a child?" Enough said!

Plenty of others out there are also doing their best to help senior pets. There are a couple of women, in fact, who might just be long-lost twins separated at birth.

Judy Harborenco from Edmonton, Canada, and Lee Van Camp. of Phoenix, Arizona, are each one-woman armies when it comes to battling for senior pets.

Each of these women has made it their mission to provide homes for the cats who need them most. Read their stories and it’s easy to see that here are two more who get the concept: senior pets are amazing!

Don't forget the cats and the dogs who love them!

And now, for those who have considered bringing a senior pet into their lives, here are a couple right here at Best Friends waiting for their home. Okie is a healthy 11-year-old dog who has no problems getting along with cats. After all, she arrived at Best Friends in a trailer with 40 of them! She and several of the 40 cats came to Best Friends from a rescue that had closed down. She’s a sweetheart of a dog who runs over for affection when anybody approaches.

Makeda and Mary are 19 and 18 respectively. These two cats came to the Sanctuary several weeks ago when their person passed on. Makeda is a bit more reserved than Mary — who likes to pretend she’s still a bit of a kitten — yet both love affection and are in good health. They’d certainly love to find their way back into a home all their own.

Obviously, these are only a scant few of the senior pets available for adoption at Best Friends, not to mention your local shelters and rescues. Whether it’s a senior cat, dog, parrot, pig, horse, rabbit, goose, hamster, guinea pig, pony or any other animal, here’s one more cheer for the senior pets who give so much more love. After all, there’s no friend like an old friend.

Now that you've read how wonderful they are, why not adopt one!