Image
Read a story and watch a video of a girl's joy at adopting a cat from the SPCA of Brazoria County.
By Arin Greenwood

Best Friends has network partners in every single state, and all of them are saving lives daily. We never get tired of hearing their stories, and that’s why we want to share them with you, too. So today, we're proud to present one from SPCA of Brazoria County in Lake Jackson, Texas. 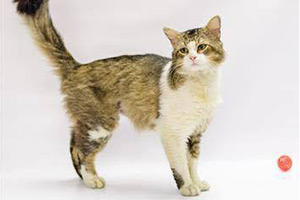 For a variety of personal reasons, it's been a hard year for Heather Wallace and her 10-year-old daughter, Jalynn. Heather thought that adopting a pet might bring some much-needed joy to their family, and she was right.

Heather and Jalynn began their search online, and that’s how they spotted Raymond's photo. He was posted on the SPCA of Brazoria County's website. They liked the way his hair fluffed out on his cheeks.

As it turns out, Raymond could use the special attention, since he hadn’t had much luck getting noticed by potential adopters since he was found digging through trash earlier in the year.

The mother and daughter  made a trip to the SPCA’s resale shop and cat adoption center called The Box, in Lake Jackson, Texas, to meet Raymond and other cats in need.

"When I walked into the shelter, he looked into my eyes. He wrapped his paws around me," says Jalynn.

That was enough to cause her to fall in love on the spot.

"Heather looked around a little through the store and the other cats. Jalynn never even wanted to see the others. She was locked on him," says Erin Matula, who works at The Box.

Erin caught Jalynn's incredible excitement on video, when she realized Raymond was going to be hers: 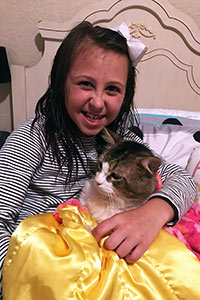 Heather and Jalynn initially took Raymond home as a foster pet, with the understanding that if things went well they'd adopt him. It took about a week for them to make it official.

"I'm excited for them all, knowing that they are so in love with Raymond," says Erin.

Raymond has become a critical, adored member of the family. He and Jalynn do everything together. They like to play, watch movies and TV, and snuggle up on the couch.

"The cat loves Jalynn and Jalynn loves the cat," Heather says. "It's been nothing but a blessing."

Photos courtesy of Heather Wallace and SPCA of Brazoria County