Image
Family's love for the senior 15-year-old dog they adopted from Best Friends Animal Sanctuary has not waned, and they continue to honor his memory.
By Christelle L. Del Prete

Hannah Vargas is 16 years old now, but Best Friends Animal Sanctuary has been a part of her life and that of her parents since before she was born. Even her middle name (Faith, in honor of Best Friends co-founder Faith Maloney) is a reminder of her connection to Best Friends. It all started about 20 years ago, when Hannah’s mother, Jennifer, learned about the Sanctuary and began sponsoring a cat who lived here. It wasn’t long before she decided she had to see Angel Canyon for herself. Once she did, she was hooked.

A few months before Hannah was born, Jennifer again visited the Sanctuary — this time with her husband, Mario. In 2005 when the couple returned with their then two-year-old daughter, the family met Arby, the dog who would change all their lives and stay in their hearts forever.

Family falls in love with senior dog on sleepovers 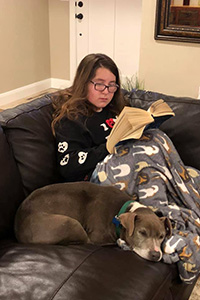 The age requirements for Sanctuary volunteers have changed since then, but at the time Hannah was able to volunteer at Dogtown by helping her parents walk, brush and love on the dogs. During that trip, the family was also able to take a dog for a sleepover each night. Hannah loved hosting dogs on sleepovers, and she especially loved a 15-year-old dog named Arby.

Arby spent two happy nights with the family, one at the beginning of the visit and one at the end, and he made quite an impact. Hannah and Jennifer both cried when they had to leave Arby behind to return home to Massachusetts.

Two months later, their feelings hadn’t changed. They were still thinking about him and how sad they were to leave him. They sent care packages with toys for him to the Sanctuary, and they befriended one of his caregivers who sent them updates about him.

Adopting a dog after a hurricane

Then, Hurricane Katrina hit Louisiana, and Best Friends was on the front lines rescuing dogs and cats displaced by the storm. To help, Jennifer and Mario decided to sign up to adopt a rescued Katrina dog through Best Friends. That October, the call came for them to travel to Tylertown, Mississippi, where Best Friends had set up rescue operations. They were warned about the post-hurricane conditions and the fact that the already sparse accommodations in the area were full. The family would have to sleep in their car or in a tent with the dog they would be adopting and bringing back home to Massachusetts.

Jennifer and Mario were understandably nervous about sleeping in a tent with a toddler and a dog who had just gone through a traumatic experience. But they also realized that Arby was the dog they wanted and needed to adopt. “We knew him and his disposition, which was important with a then three-year-old child,” Jennifer says. Adopting him was the perfect solution. The family would have Arby in their lives, and that would free up space at the Sanctuary for another rescued dog after the storm. 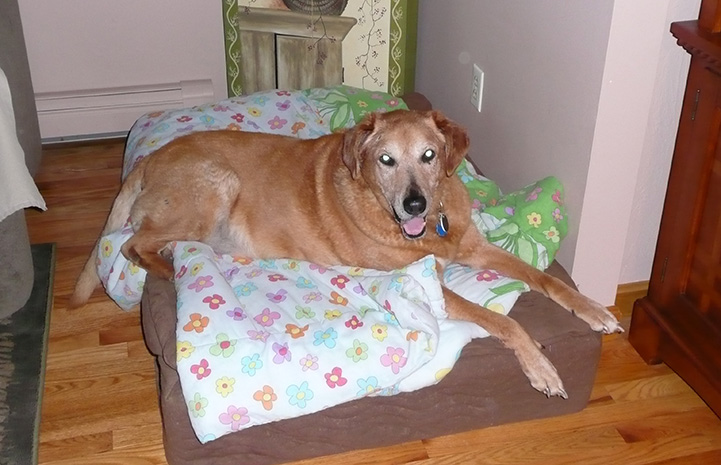 A well-deserved life for a senior dog

“Given his age, Arby happily spent his days eating, resting and sleeping,” Jennifer says. “He and Hannah would often lie on the floor together. He loved to wad up the blanket on his dog bed between his front paws and suck on it. He did that when he was at Dogtown, too, and it was so cute.” 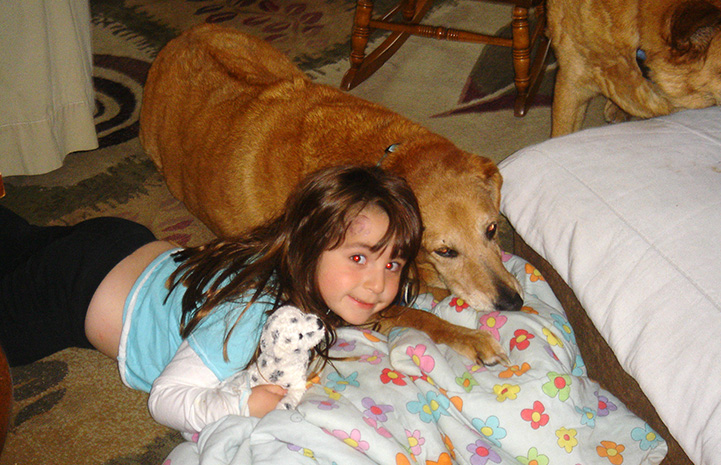 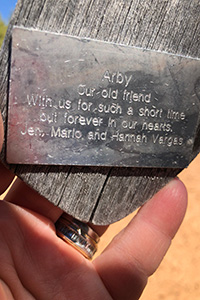 When Arby passed away in September 2007, the family had two memorial wind chimes made — one for their house and another to be placed in front of Old Friends, the building where Arby had lived at the Sanctuary.

“Some people thought we were a little crazy to adopt a 15-year-old dog from across the country,” Jennifer explains. “Mario and I never looked at it like that. We were happy to love him and give him his own house, smells, couch and kid to call his own. Every dog deserves that.”

Today, the family still honors Arby in the way they live their lives and each time they come to the Sanctuary. Before they adopted Arby, they volunteered at their local SPCA and at a local farm sanctuary. Mario and the couple’s younger daughter, Gianna, still volunteer weekly at the farm sanctuary. The family currently has four rescued Labrador retrievers of their own, and in the past two years they have fostered 16 dogs for Labs4Rescue, a Connecticut-based rescue organization.

“It gives all of us great joy to do our part, however small, to help reach the no-kill 2025 goal,” Jennifer says. “Without fosters, adopters and places like Best Friends, this is not possible.” 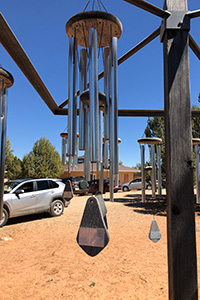 Recently, Jennifer visited the Sanctuary again with Gianna. It was Jennifer’s ninth visit and Gianna’s second. Now 10-years-old, Gianna is finally old enough to volunteer at Dogtown under the new volunteer guidelines and, just like her older sister has for years, she enjoys dog sleepovers.

Just as she has in the past, Jennifer stopped at Arby’s memorial wind chime as she and Gianna made their way around the Sanctuary. Almost 12 years later, it still chimes — just as Arby still lives on in all their hearts.

Though Hannah couldn’t be there this time, there’s no doubt that she will visit the Sanctuary and her beloved Arby’s memory again. "Adopting Arby through Best Friends opened my eyes at a young age to the beautiful experience of giving a second chance to a dog who became a big part of my family and my life," she says.