Adopting a boxer mix dog is a ‘prescription for love’

Image
Man whose wife had died found himself grieving and lonely. Adopting a boxer mix dog has provided him with just the right dose of love.
By Denise LeBeau

"We're sitting here watching television right now. Trixie is right by my side, where she always is, where she has been since I adopted this wonderful dog," shares Bob Parsons, the man who found his perfect companion animal at the Best Friends Pet Adoption and Spay/Neuter Center in the Mission Hills section of Los Angeles.

Trixie was surrendered by her owner at the East Valley shelter, and that's all the information available on how the sweet boxer mix came to be homeless. What was determined before she met her new dad was that she was house-trained, good with other dogs, and great with kids over six years old. She was probably a doted-on dog who had everything until one day life dealt her family a hand that meant they couldn't keep her.

Bob's life had also been dealt a heart-wrenching blow when his beloved wife passed away six years ago. While he felt the sting of loneliness, he hadn't been ready to make any commitments. His daughter believed a dog could help him deal with his grief and bring some joy into his home. She reached out to Best Friends Animal Society and ultimately connected with Angela Rovetto, lead pet caregiver at the center, explaining the type of dog that would be great for her father.

The wheels were set in motion for the next chapter for Bob and Trixie.

A perfect match between man and dog

The day Bob arrived at the center, Angela already had a short list of dogs in mind to introduce him to. She brought out the first one to meet Bob, but it wasn't the right fit.

"I knew they had owned a spaniel mix previously," says Angela, "and I had a list of the type of energy and personality Bob was looking for. Puppies were a 'no.' Bob needed a couch potato. He was upfront about having some difficulty keeping up with an over-energetic dog."

The second dog she brought out was Trixie. 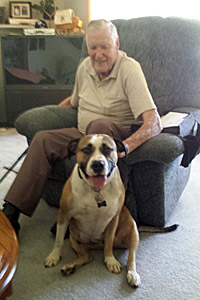 "I knew right away I wanted to take Trixie home and give her a try," shares Bob. "I also knew that Best Friends is just a phone call away, so if there were any issues, they could be worked out immediately."

Trixie turned out to be just right. "She's a prescription dog. Trixie fits me perfectly. I can't believe that I got a dog who has every single thing on my list of what I wanted and what I didn't want in a dog," continues Bob. "Thanks to Best Friends, I got a dog who matches my dreams and my desires. It's like Trixie was made just for me."

Among the moves that Trixie excels in, "Velcro dog" is one of her specialties. She loves Bob as much as he loves her, and she is always within reach. Angela knew Trixie was "the one" for Bob. She had Trixie as an office dog and is Trixie's number one fan.

"It truly has been synergistic the way things worked out," says Angela. "To have these outcomes where everything falls into place, it has been the true example of a loving animal finding exactly what she needed and a senior who opened his heart to give a homeless animal a chance, and (he continues) to receive all her love and gratitude in return."

Everyone wins when love plops down next to you on the couch. Adopting a homeless pet is the way to make this happen.

Find your love match and save a life.