Ailing kitten gets help when he needs it and a kitten friend, too

Alucard had a serious upper respiratory infection but with help from Best Friends he defied the odds to thrive.
By Lindsay Hutton

The minute Meg McCloud saw a four-week-old kitten named Alucard, who came to Best Friends in Salt Lake City from the West Valley City Services animal shelter, she could tell he didn’t feel well. The white fur around his pink nose was crusty and his blue eyes were weepy. It didn’t take long for the team to determine that he had a serious upper respiratory infection (URI).

It was Meg who named him Alucard (Dracula spelled backwards) after the white-haired Dracula’s son character in the Netflix show Castlevania. Kitten Alucard had more than just the snowy white hair in common with the half-human, half-vampire character. He was also ― like a vampire ― about to cheat death. But he couldn’t do it alone and he wouldn’t have to.

From the moment he arrived at Best Friends, feisty little Alucard had friends fighting alongside him. At Best Friends, he received constant care from the medical team under the supervision of veterinarians. His congestion was severe, with his nose so blocked he had to breathe through his mouth. He had diarrhea, and by the second day, hypothermia.

Unable to smell or breathe very well, Alucard wasn’t interested in eating. This was especially dangerous since he weighed so little and was struggling to keep warm; however, after about five days he started to turn the corner.

Once he was stable enough, Meg, a manager at Best Friends, brought him home to foster, knowing that he would need round-the-clock care and that he might not pull through. What she didn’t know yet was just how scrappy he was and how big his fighting spirit is. 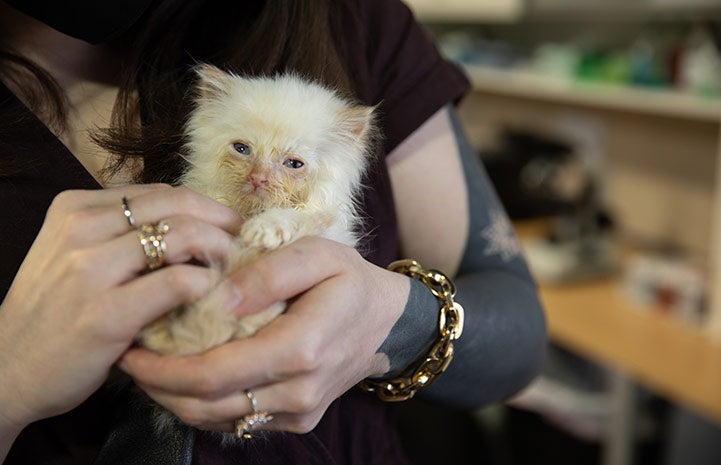 Meg followed the vet’s instructions, feeding Alucard with a syringe five to six times a day and patiently making sure that he got down a nutritious mix of milk, wet food and probiotics. She also carefully and gently bathed him in an oatmeal bath each day, walking a tightrope between keeping him clean and keeping him warm (which is why his baths took hours).

Twice a day, Meg gave Alucard subcutaneous fluids with vitamins to hydrate him. Four times a day for 10-15 minutes each time, she put him into a crate with a nebulizer and waited for the medicated fog to work its magic. She administered nose drops, eye meds and antibiotics, plus ointment to soothe the skin of his tush.

To help keep Alucard’s body temperature up, Meg saw to it that he was cradled by snuggle disks, soft-covered, microwave-safe plastic heating pads. She also brought in a reptile heat lamp and put it over his bed.

Despite this, several times during the first five days Alucard’s body temperature dropped so low that it didn’t even register on the thermometer. When that happened, Meg was grateful to have an incubator at hand. Alucard was placed inside, and she rubbed his gums with dextrose every 15 minutes to raise his blood sugar to give him a little boost. Oxygen pumped into the incubator provided further relief by helping him breathe. 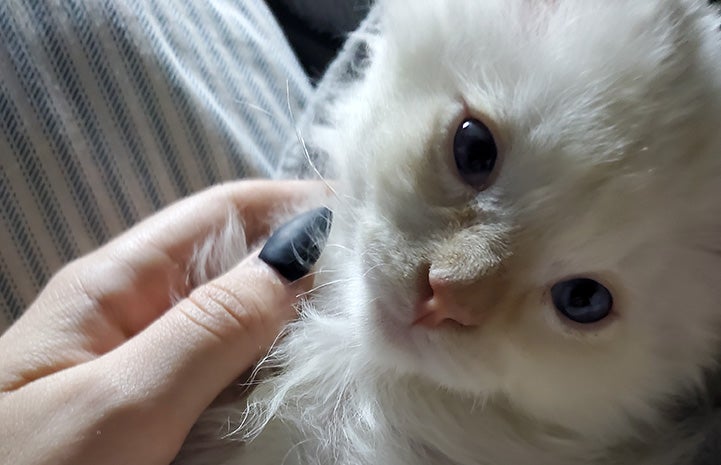 Nothing can keep a kitten spirit down

Through all this, Alucard showed signs of typical, rambunctious kitten spark. In between waves of feeling bad, he became super playful, ambushing the toys in his kennel and nipping Meg (because he hadn’t had any siblings to teach him not to). Megan says he became the silly, four-week-old that he was, following goofily along behind Meg’s cats and dogs and batting at their tails while they ignored him. He became himself.

When the illness raged, his personality slipped and he looked defeated. Meg says this was when she knew to keep pushing. That crazy kitten was still in there. She wouldn’t give up on him. After about two weeks of full support care, Alucard started to eat on his own. The good signs kept coming.

[9 ways pets tell you they love you]

Four weeks into treatment, Meg knew Alucard had turned a corner. Though still underweight, he was gaining steadily. He stayed in kitten mode and became more active, which though delighting Meg also reminded her that healthy, independent kittens need a lot of interaction and do best with another kitten playmate. Her cats continued to ignore him as though he was a fluffy walking biscuit and not a real kitten. He needed a fellow kitten friend, so she found him a foster home with someone who was already fostering another kitten. The two kittens immediately hit it off and became snuggle and play buddies. They were both ready for the next step in their lives: a home. 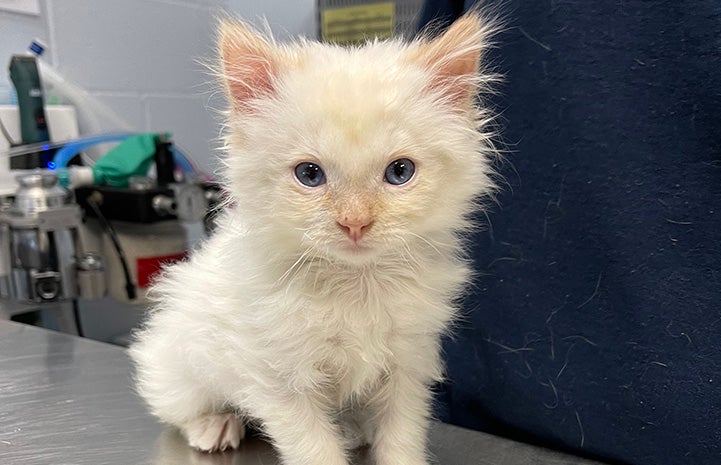 Kittens get new names and a new home

Tanner Mecham was looking for a kitten to adopt when she saw a photo of Alucard on the Best Friends website. From his picture, she never would have guessed that he had been sick. She saw a kitten who, with his fluffy white coat and brown-tipped ears, looked like a handsome, toasted marshmallow. His blue eyes were beautiful and bright, and his partner in kitten crime had the look of a rebel, a mischief maker. She decided to adopt them both.

A lover of ancient Greek culture, Tanner named her first cat Plato, and when he passed away in November, she and her father grieved his loss. Now, in Alucard, she saw a Socrates. And in his rowdy orange buddy, she saw a Crookshanks (named after Hermione’s orange cat in Harry Potter). So, they became Socs and Crooks, a couple of kitten outlaws. 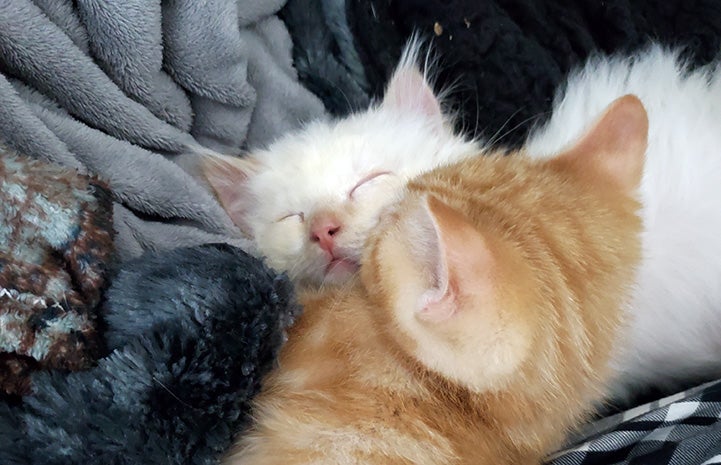 start Tanner’s day by bouncing off the walls. She bought them beds and numerous toys but they ultimately prefer a good, old-fashioned cardboard box. A few of their favorite activities are knocking over the broom and mop in the kitchen and gnawing on cardboard.

While Tanner suspects that Crooks is related to spider monkeys (since he has a tendency to climb curtains), she says Socs is more grounded. Get him a tunnel, though, and the zooms take over. He zips in and out until Crooks tackles him and they are off to the next game. Today he’s a healthy kitten, living his best life with his best friend. Seeing the updates from his new home and watching him grow is worth every minute of care it took to help save his life. 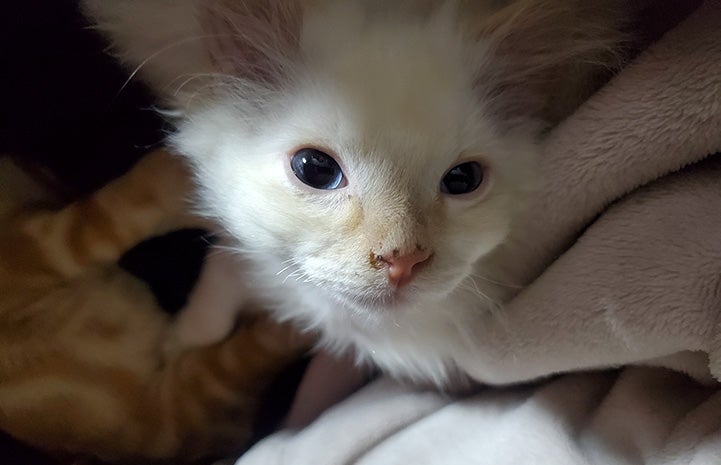 Have some room to spare?

Giving pets a loving place to stay until they land new homes forever makes a difference in their lives.

Bunny with head tilt gets a second chance at Best Friends