Image
A red-tail hawk shot in the wing and a host of baby orphaned animals are the latest rescues at Best Friends’ wildlife rehabilitation center.
By Best Friends Animal Society
By Ted Brewer

The red-tail hawk dashed out of the roadside brush and skittered across the highway, nearly getting hit by the oncoming car. The driver of the car pulled over and found the hawk near the road. Unable to fly, the bird had already been injured. Luckily, he was passive enough that the driver was able to pick him up, put him in her car and deliver him to Wild Friends, the wildlife rehabilitation center at Best Friends.

X-rays made clear that the hawk had been shot, the single bullet fracturing his ulna (a bone in his wing) in two places.

Thankfully, whoever shot the hawk wasn’t using lead ammunition, which could have resulted in lead poisoning and made matters much more complicated for the hawk. 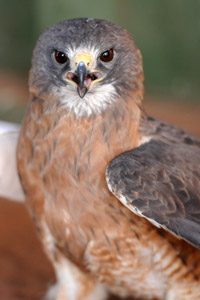 Best Friends wildlife rehabilitators Carmen Smith and Barbara Weider were able to align the wing with a splint in such a way that will allow the bone to callous and heal on its own — without surgery, thankfully. Carmen says that healing will take approximately three to four weeks.

Judging by how emaciated and dehydrated the hawk was when he arrived at Wild Friends, Carmen thinks the juvenile was probably not doing well before he was shot, that he was "failing to thrive," a phrase wildlife rehabilitators use to indicate when an animal is unable to take care of his basic survival needs, such as obtaining food and water.

"I wouldn’t be surprised if his shot wound had something to do with his failure to thrive," Carmen says.

The hawk was so debilitated that he couldn’t process food. Carmen put him on a liquid diet, which meant having to tube feed him. After a few days on the liquid, he’s now eating solids again.

The prognosis is now good, and the hawk will be released following the healing of his wing and several weeks of rehabilitation. 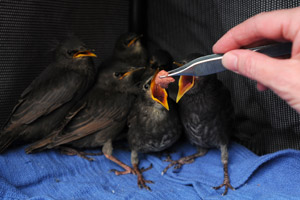 This is the time of year when the phone at Wild Friends rings off the hook, almost every call about another orphaned baby animal. This year, Wild Friends has been hit particularly hard. So far, the center has received six baby starlings, a baby jackrabbit, a baby cottontail, a baby white-tailed antelope squirrel, a baby sparrow, and two baby wood rats, as well as juvenile rock squirrel and two juvenile doves. Other recent arrivals include an injured robin and an injured Bewick’s wren.

The wood rats arrived in respiratory distress, a symptom of pneumonia. For three weeks, they had to be on oxygen 24 hours a day. "It meant the difference between living and dying," Carmen says. The rats are now doing well. 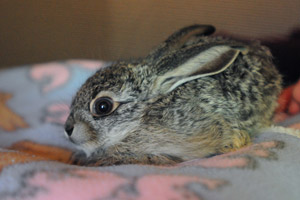 "He was so starved that he eagerly drank from the bottle the moment we got him," Carmen says. 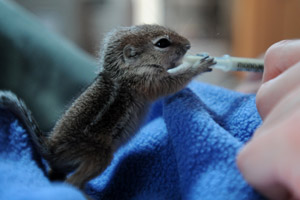 Many of the animals currently at Wild Friends, including the rock squirrel and Bewick’s wren, were caught by cats, serving as a reminder that it’s important to keep our cats indoors, especially during this vulnerable time for wildlife.

Carmen recently released two Brazilian free-tailed bats. The two came to Wild Friends earlier this spring from St. George, Utah, having been found in inopportune places and awoken from hibernation before it was warm enough for them to be outside at night. Carmen released both in the vicinity of where they had been found so they could reunite with their respective family groups.

New and improved housing for the pigeons

Each of the spacious boxes, made purely of cedar, can hold as many as seven pigeons.