Back in Black promo breaks barriers

During the month of May, the Back in Black national campaign from Best Friends spotlights homeless black and mostly black dogs and cats. These animals are often overlooked for adoption in shelters across the country. No More Homeless Pets Network partners can participate in the promotion, which is in its fourth year, and receive professional marketing materials and more. The No More Homeless Pets Network is a Best Friends program that works with rescue organizations and municipal shelters to end the killing of dogs and cats in our nation’s shelters.

Every dog has his day

Speck was a favorite among the staff and volunteers at McKamey Animal Center in Chattanooga, Tennessee. The pit bull terrier mix was accepted into their center as a stray. Speck’s first adoptive home fell through due to breed discrimination in his housing complex. Speck was then adopted out a second time to a family who couldn’t contain him. On a few occasions, the center was called because Speck’s microchip had been scanned when he wound up at animal control. Dubbed the “Houdini dog,” he needed an experienced guardian. 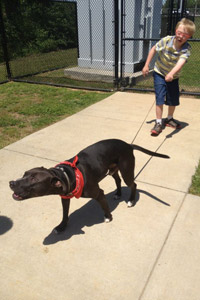 “Speck is just a sweet, loving dog who needed the right fit for him,” says Tricia Sebes, animal care coordinator. “In the South, we have a lot of strays who are great family dogs. Back in Black gives dogs like Speck a better chance at finding a home.”

Greg Hyde knows a thing or two about needing a chance. His 10-year-old son, Luka, was born with Down syndrome. He and his family have been fighting for chances for the last decade to get their family the equal rights that most families take for granted. Their home includes two rescued Chihuahuas and another black pit bull terrier, also adopted from McKamey Animal Center.

“We were thrilled to see the Back in Black promotion. We wanted to adopt another dog because we had just moved to a bigger property with acreage,” says Greg. “We always adopt our pets because there’s no such thing as a ‘throwaway’ animal. Our rescues are the most perfect companion animals in the world.”

As they were looking at some dogs, Speck dropped down on his belly, and they knew he was the one they wanted to adopt.

More for the animals 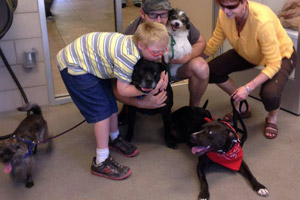 This is the third year McKamey Animal Center has been participating in Back in Black, and they have found the event to be imperative to helping place this overlooked population in homes. “There’s a big advantage to being associated with such a well-respected organization as Best Friends,” says Tricia. “This promotion not only gets animals into homes, it opens a bigger dialogue about the issues. There is such a thing as ‘big black dog syndrome,’ and getting these dogs into homes is important to the work we do.” As an open-admissions shelter, they took in 6,000 animals last year alone.

“The most ‘likes’ we get on our Facebook page is whenever we put up something about Back in Black,” says Tricia. “It resonates with the public and it engages the community. We’re here to help those left behind.”

Thanks to Back in Black, Speck wasn’t left behind. In fact, his new name, Scout, is quite fitting. “Scout hasn’t left our property ever,” says Greg. “In fact, we had a big barbecue for my son’s Webelos Scout troop – lots of food and commotion, people coming and going – and Scout just chilled out with everyone. He knows he’s home for good.”