Barkworks, a pet store supplied by puppy mills, in the Westside Pavilion mall in Los Angeles, California, closed its doors for good on December 31, 2012. Best Friends volunteers have been educating consumers about where that "doggie in the window" comes from at that location for over four years.

With a Los Angeles pet sale ban ordinance passed earlier in the year, Barkworks would have had until June 2013 to shift its business model to exclusively offer rescue pets. That would have meant another six months of puppy mill offspring for sale and competition for L.A. Love & Leashes, a humane model pet store offering rescue animals, located in the same mall.

Elizabeth Oreck, Best Friends' puppy mill initiatives national manager, attributes the amazing strides being made on behalf of mill dogs in Los Angeles to the dedication of some committed individuals. "The closing of this store is really a victory for our outstanding volunteers. They have been doing the heavy lifting over the years. We've had dedicated volunteers show up every weekend, and they've contributed hundreds of hours of manpower to help change the hearts and minds of the animal-loving public. They've also been doing it for all the right reasons. They're the unsung heroes of this closure and the perfect illustration of grassroots activism - working tirelessly to make a difference." 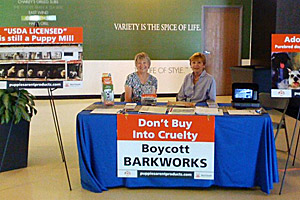 Cynthia Rosen has been part of the core group of volunteers who embraced the mission to educate consumers about the cruelty of puppy mills and highlight how many wonderful dogs can be found in shelters and rescue organizations. The group talked to customers from all walks of life, including writers, actors, engineers, attorneys, professors and students, about the puppy mill issue and the importance of spaying and neutering pets. They also handed out informative literature.

In the face of uncertain outcome, they pressed on. Cynthia states, "After the third year, we were very discouraged. A decision was made that the four regular volunteers would alternate weekends. This meant shortening the hours, but still maintaining a weekly presence. There was never a thought of completely abandoning the puppies. Our fantasy that the puppies were waiting for us on Saturdays kept us going - and that their mothers, still locked up far away, would somehow know their babies were not forgotten."

Ultimately perseverance paid off for Cynthia, the other volunteers, and, of course, the animals themselves. "Closing of the Westside Pavilion Barkworks is significant. This is a busy mall, and people will notice. I would like to think that the public will absorb the fact that the Los Angeles City Council had the courage and the ethical backbone to fight corporate bad behavior."

In addition to the pet sale ban in Los Angeles, there were other victories along the way, thanks to the work of Elizabeth and the larger animal welfare community. When unjust restrictions were placed on the Barkworks protestors by the mall chain Macerich, Best Friends filed a lawsuit involving free speech that was monumental for demonstrators in California when the courts ruled in Best Friends' favor. Shortly thereafter, Macerich implemented a nationwide policy to no longer lease space to puppy mill-supplied pet stores in their malls. So from peaceful demonstrations came a pet sale ban, a mall chain encouraging pet adoption, a fairer demonstration policy in California, and an immeasurable amount of education shared with the general public. Grassroots activism at its best indeed!

For more information on what you can do about puppy mills, check out Best Friends' puppy mill initiatives.