Image
Beagle's stunning walk at Strut Your Mutt and 'adopt me' vest catches the eye of a potential adopter and leads to a remarkable dog adoption!
By Christina Green

Wyatt was prancing through the parking lot of Black Hill Regional Park after Best Friends’ Strut Your Mutt when he caught the eye of Karen Plá, who was driving by after photographing the park’s fall foliage with her mom. This chance glance, followed by a sleepless night spent investigating on the Internet, several emails and a shot in the dark, aligned the planets and brought these two strangers together in what might be the most improbable adoption story of all time. And it all happened just in time for the start of the holiday season. 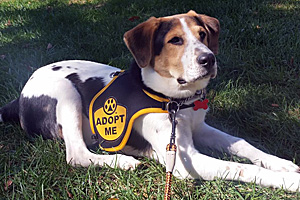 Black Hill Regional Park in Maryland is huge — as in 2,000 acres huge. So it’s not surprising that some visitors there on October 10 had no idea that the park was hosting one of the biggest fundraising community dog walks and dog-themed festivals in the country. Best Friends’ Strut Your Mutt, presented by BOBS from Skechers, was taking place in one section of the park, where more than 600 participants and 450 dogs had come together to raise money for 10 local animal welfare groups.

Karen and her mother were among those who were not aware of the Strut Your Mutt event on that fall day. But when she spotted Wyatt, a tricolored beagle mix, walking across the parking lot with such calm confidence, it changed her life.

“What can I say? I was struck by how beautiful he was and how he carried himself,” she says. “I should have stopped then and there, but didn’t and I immediately regretted it.”

Wyatt himself might not have noticed the nice ladies ogling him from the car window, but the person walking him certainly did. “I saw the car slow down and could see the ladies inside looking at Wyatt, and I was like, ‘Wait, please come back,’” says Tammy Mathis of Petconnect Rescue. Tammy, Wyatt’s foster mom, had taken him to the event hoping he would get adopted. “But they drove off, so I thought they must not have been checking him out after all.”

Puppy and his littermates

At four months old, Wyatt and his siblings landed at an animal shelter in south central Virginia. That’s where the people of PetConnect spotted them and brought them several hours north for a fresh start at their place, called Muddy Paws Farm.

Wyatt ended up being a unique boy. Unlike the typical puppy, who tends to be all over the place, he’s an old soul in a young body. That explains why he walked on leash beside Tammy with such purpose at Strut Your Mutt, even though he was just approaching six months old. It’s as though he knew not only where he was going, but that someone special would be there when he arrived.

Can't get beagle pup out of her mind

If only Karen knew she was that special person meant for Wyatt. Instead, she drove home and told her husband about the little dog with the “Adopt me” vest.

“We were definitely in the market for a new pet, but he had a beagle before and thought they bayed, barked and bolted too much,” she says. “But he wanted to keep an open mind about it.”

That was exactly Karen’s problem: Her mind was so open to the idea, she couldn’t sleep a wink that night. So she got up and began researching the park, looking for event information and contact information. Eventually, she came across the name of Best Friends national events specialist Rachel Hyde.

“I received an email at 2 a.m. the day after the DC Strut Your Mutt, so clearly this had been on her mind,” says Rachel. “I forwarded Karen’s description to Taylor Sharp, our Network partner events specialist, to see if she could email all of the groups’ fundraising team captains.”

The mass email went out asking if anyone recognized the description of the beagle. And, of course, Tammy immediately recognized it.

“The details were exactly perfect,” Tammy says. “It was so cool, especially since we had taken him to two adoption events before, and though he was always very popular, we hadn’t received one application on him.” Tammy emailed a picture of Wyatt to Taylor, who forwarded it to Rachel, who forwarded it to Karen. 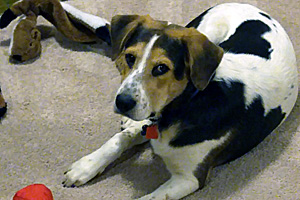 “I wanted to go get him right away,” says Karen. Instead, at Tammy’s suggestion, they waited a week for Petconnect’s next adoption event.

Karen says her husband was hoping for a different love connection. Wanting to respect her husband’s wishes, they met a few other dogs, all of whom were lovely and would have made great pets. But ultimately, they decided on Wyatt and brought him home later that evening.

“He’s the sweetest, most loving, kind, sensitive dog ever,” Karen says. “He almost never barks, not even when he needs to go outside.”

It took them a while to catch on to Wyatt’s gentle communication style. If Wyatt needs to head out, for example, he’ll give their hands a gentle lick. If they don’t respond, he puts his head on their lap and looks up with his soulful brown eyes. After that, he’ll hop his front paws up on their laps and lick their faces, but no baying or barking.

Karen says he loves to say hello to everyone on their walks. And he can’t pass up a patch of moss or pile of pine needles without squirming around on it and scratching his back. Her family also loves watching him enjoy his favorite treats, which he “chews and chews, like he’s savoring the sweetest, most savory thing he’s ever eaten,” she says. “He’s brought a lot of joy to our family and makes us smile every day.”

And her once skeptical husband? He now believes this was all serendipity. “He says I couldn’t have picked a better dog for our family,” Karen says. “We’re so thankful to Best Friends, Petconnect and Muddy Paws Farm for making this all possible.”