Image
Beloved Hurricane Katrina survivor dog is a senior now whose wise, soulful demeanor has won him many friends and fans.
By Christelle L. Del Prete

In addition to Best Friends’ efforts on the ground in New Orleans and in the rescue camp in Tylertown, Mississippi, Best Friends Animal Sanctuary took in about 145 canine Katrina survivors in the days, months and years following the unprecedented disaster.

Now, we’re sharing updates on some of the pets who call Best Friends home, to let people know how they’re doing, a decade after their lives were turned upside down. 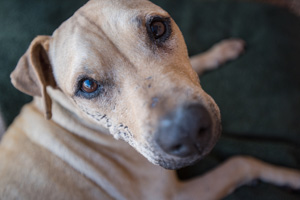 Scratch hasn’t had the easiest road to travel in the years since Hurricane Katrina. Now 12 years old, he walks slowly with a slight limp, and his golden coat is crisscrossed with dark scars that have never faded. He needs physical therapy every day to keep him feeling good, he doesn’t like other dogs, and for most of his life he’s had to deal with babesia, a tick-borne illness. But none of that matters to Scratch or to the people who love him.

A good life for a deserving dog

He feels perfectly at home in Dogtown, where his caregivers and frequent visitors adore him. Caregiver Erin Schmitz says that over the years, Scratch has made such a good impression on people that he’s earned a fan club of volunteers who come to see him again and again. “He is special to a lot of people,” she says.

Local volunteer Justyne Moore remembers the first time she met Scratch in February of 2009. “I took Scratch on a sleepover and fell in love with him,” she says. “He loves his car rides, sticking his head out of the window and feeling the sunshine on his beautiful face.”

Scratch remains one of her favorites. While his scars are a reminder of his life before he came to Best Friends, Justyne says, “His smile tells the story of a dog who was rescued and now spends his days surrounded by love and volunteers who enjoy taking him on car rides around the Sanctuary. As I look into my rear-view mirror during our drive, I can see his smile, and the look of contentment on his face.”

Just a few months after Justyne’s first meeting with Scratch, repeat volunteer Wendy Dapore also met and fell in love with him. “April of 2009 was my first visit to the Sanctuary, and Scratch was my first sleepover dog,” she explains. “We had an instant connection. He captured my heart with his warm eyes and did the cutest happy dance when he got his dinner. I've always had a houseful of dogs, so bringing Scratchy home with me just was never really an option.” 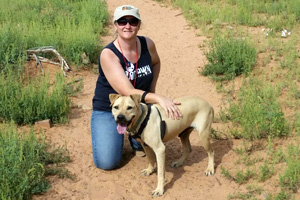 Every year, Wendy returns to the Sanctuary to reunite with her old friend. Together, they take a walk, go on an outing, enjoy a scenic car ride or simply just spend time together in his room or his yard. Wendy says, “Scratch is a special boy and will always hold a special place in my heart.”

She’s not alone. Anyone who spends a few quiet moments with this sweet survivor will likely see past the marks of Hurricane Katrina and his advancing age. With his wise, soulful eyes and his calm, sweet demeanor, Scratch seems to naturally make people feel at peace in his presence. And, with the years of care and love he’s received from his caregivers and perfect strangers who have become his loyal friends, Scratch, too, is at peace.

To help more animals like Scratch get the royal treatment they deserve, make a donation to Best Friends.

Photos by Kurt Budde and courtesy of Wendy Dapore