Image
Volunteers Christy and Craig Schilling in Los Angeles and Marti Wheat in New York lend their talents and time to help save homeless pets.
By Denise LeBeau

Volunteers make the difference. From transporting, to fostering, to fundraising and beyond, the tireless work of volunteers is saving more animals’ lives than ever. Here are just some of our volunteers who exemplify what it means to be dedicated to realizing a time of No More Homeless Pets.

Christy and Craig Schilling have been volunteering with Best Friends Los Angeles programs for many years. Their involvement with animal rescue started slowly. Christy had been working with pregnant teens, and one of her clients had a Rottweiler puppy she was considering abandoning in the street. Christy asked the client to give her the pup so she could re-home him. In the process, Christy got hooked on animal welfare.

Christy and Craig enjoy seeing an animal adopted into a loving forever home. They also believe in educating the public and love being involved with like-minded people. Christy takes to the streets to help spread the word on proposed legislation to ban the sale of dogs and cats in Burbank and other cities.

Christy cites the kittens they have fostered and all the animals they work with at Pet Super Adoptions as their inspiration to do more. She says the animals have such beautiful spirits, and she relishes being part of the team that ensures they go to good homes.

In addition, Christy and Craig are dedicated to helping Best Friends Pet Adoption and Spay/Neuter Center in Mission Hills get their adoptable pets adopted out to new homes. They help with mobile adoptions. They are thrilled to be part of helping Los Angeles become a no-kill city. 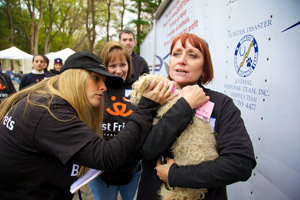 Marti Wheat at a Best Friends Pup My Ride event

Marti Wheat volunteers with Best Friends’ New York programs, where she’s a staple at such events as the Pet Super Adoptions and Strut Your Mutt. She has also served as a volunteer to welcome the puppy mill rescues to the East Coast when the Pup My Ride truck rolls up.

Marti got involved in animal welfare on the heels of the Michael Vick dog-fighting scandal. She was infuriated by his callousness and upset that he seemed to get a hero’s welcome from the NFL, while his canine victims had been scarred for life by his actions. Marti got involved so she could help victimized animals.

Her favorite things about volunteering are knowing she is making a difference in an animal’s life and meeting people who feel the same way. She says, "I’ve met some extraordinary people as a Best Friends volunteer, people who will be a strong part of my life beyond our volunteerism."

One of Marti’s favorite volunteer opportunities is working the Pet Super Adoptions. Helping match the right dog with his or her forever family is on the top of her list of awesome things to do over a weekend. Her dedication has helped countless animals go on to better lives.

No matter where you live, you can make a difference in the lives of homeless pets by volunteering through Best Friends.