Birthdays and anniversaries are typically times of celebration. That holds true for Liz Spalding and her husband, Jesus Garcia. However, instead of cakes and gifts, their festivities include handing out cat treats and using mops while volunteering at Best Friends. 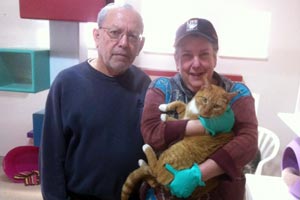 Though she had heard of Best Friends, Liz never imagined she would get the opportunity to visit the Sanctuary. But when the couple moved from Kentucky to Las Vegas roughly a decade ago, she realized it would only be a short drive away. The next year, when Jesus asked her what she wanted for her birthday, she replied, “A cat.” With two felines already at home, he nixed that request, but offered another, and maybe even better, option: a trip to Best Friends.

His offer was more significant than one might think. Jesus was more of a dog person. But the Sanctuary has a magical way of affecting people. The cats there melted his heart – and after their second visit, Jesus was committed to helping.

“One of the things I’ve learned by going to Best Friends is the value of life,” says Jesus, “not just for human beings, but also for animals.”

In fact, now he’s often the one who suggests that they visit.

The Great Awakening to animal advocacy

From the first moment, Liz has cherished her time volunteering with the cats. Every birthday and anniversary milestone offers the chance to help, while making new friends at the same time. And in 2007, when Best Friends was called in to help over 800 cats from a hoarding situation in Pahrump, Nevada, Liz offered her support and time.

In return, she experienced an epiphany, which she calls the Great Awakening, after the 18th-century American religious revival.

“I’m not a religious person, but I’m a spiritual person, and I find in taking care of cats what I think other people find in going to church,” says Liz. “It gives me peace, and it gives me a sense of community with other people who share my feelings for cats and animals. That’s why I volunteer for Best Friends. It’s what I do to do something good for the world.”

Spreading the message about saving animals 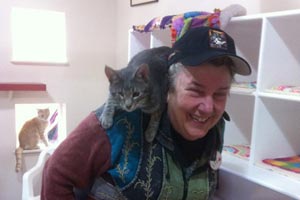 Liz and Jesus now volunteer wherever they are needed in Cat World, often helping in Casa de Calmar, the building that houses cats with feline leukemia (FeLV). One such kitty managed to win them over this year – Tiresias.

Like his ancient Greek namesake, Tiresias is blind. However, he doesn’t let either his sightlessness or FeLV status get him down. In fact, Tiresias was the highlight of Liz and Jesus’ last trip. He instantly sensed when there was a lap – and even made one if one wasn’t available. He also “helped” with their cleaning chores – if you consider playing with mops helping. Regardless, he made quite the positive impression.

After Liz and Jesus returned home, they had some house guests who could not understand saving cats like Tiresias. It gave Liz an opportunity to explain why all animals deserve saving and why they continue to help.

“Save Them All. These three little words — like ‘I love you’ — say so much,” says Liz. “Save Them All is the umbrella under which all Best Friends’ initiatives, like saving community cats and fighting puppy mills, fit. Best Friends has achieved what it has done so far by aiming high. Save Them All is a lofty goal, but actually no other goal is acceptable.”