Blessing of the Animals

Image
Blessing of the Animals takes place in New York with the Reverend Dr. Stephen Bauman and Rabbi Peter Rubinstein on hand to bless the animals.
By Denise LeBeau 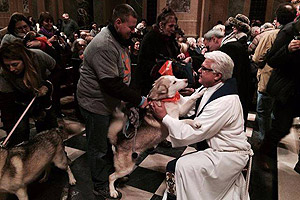 They ran, strolled, hopped, trotted and swam to Christ Church on December 8 to participate in the Blessing of the Animals. The event was hosted by Cindy Adams, New York Post gossip columnist and animal activist, and co-presented by Best Friends, Cornell University College of Veterinary Medicine, and Baker Institute for Animal Health. The Park Avenue event drew over 650 companion animals of every stripe – horses, dogs, cats, bunnies, guinea pigs and at least one goldfish – made their way with the people who love them.

With the Reverend Dr. Stephen Bauman and Rabbi Peter Rubinstein on hand to bless the animals, the event had an even further reaching charitable side, in addition to celebrating our pets.

Rejoicing for the animals

As the services began, St. Raymond Junior Choir raised their angelic voices to the heavens with renditions of Christmas carol classics. As they sang an original piece with a refrain of woofs and oinks, a large, black dog with a gray muzzle joined in on the holiday fun by adding a howling solo. Best Friends New York programs was also there to increase awareness of adoptable pets, because as Jamie Lyn Rubin, program manager, says, “We have dogs like Sweet Pea in our program looking for homes. She was pulled from New York City Animal Care & Control just days before her time was up. She’s a Labrador mix who loves people and other animals; there’s no reason she should be killed.”

Buddy, the budding singer, is a nine-year-old dog adopted from a shelter. He was there with his sister, Haley, and their mom, Barbara Nickel. Barbara, a longtime Best Friends member, attended for two reasons: to have her dogs blessed, and to support the other animals still waiting for their forever families. “ 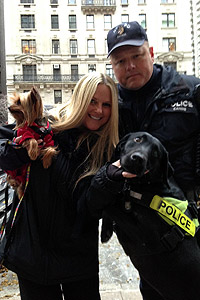 Among the many animals blessed, the most moving were those from the New York Police Department’s K9 Unit. The canines were there with their handlers as was Police Commissioner Ray Kelly. Officer Vinnie Ewart was there with his dog, Curtin, named for a fallen hero, Sgt. Mike Curtin, lost too soon on September 11th. “Of course I’d want Curtin to be blessed,” says Vinnie. “He’s with me around the clock.”

Husky House, a Best Friends No More Homeless Pets Network partner, was there, bringing some of their more disadvantaged charges. Neptune, a Yorkshire terrier rescued by Husky House from NYC Animal Care & Control after he was hit by a car, was a showstopper. He was there giving a face to every forgotten animal, bringing hope and joy to all around him.

It’s fitting that a Yorkie in need would win the hearts of the crowd. It was Cindy Adams’ two Yorkies who got her involved to launch this event. “Everything about Juicy and Jazzy inspires me,” says Cindy while greeting the throngs who came by to admire her dogs, make a donation, and say “hi” to one of New York’s most compassionate and iconic citizens.

Beyond bringing the community together, money and toys were collected, as well as awareness raised for the less fortunate – homeless pets. Two large bins of toys were taken to the pets-in-waiting at New York City Animal Care & Control immediately following the event. The $2,000 raised from the day’s 750-plus attendees is being split between Best Friends and Christ Church.

“Our local No More Homeless Pets Network partners in the tri-state area are instrumental in helping us increase the save rate for many animals, even those with special needs. The money raised today will not only help us save even more animals; it will allow us to help the groups on the frontlines.”

Learn more about our No More Homeless Pets Network partners and volunteer opportunities around the country from Best Friends.