Blind, toothless cat has the best attitude ever

Image
Cat has various challenges, including FIV, dental disease, and blindness (his lost his eyesight due to glaucoma), but he's joyous despite it all.
By Christelle L. Del Prete

When you first meet Richie, you might be tempted to feel bad for him. At 11 years old, the orange tabby cat looks like he’s lost a few major battles in his life. Over the past year, he lost both of his eyes to glaucoma and all his teeth to dental disease. It’s enough to make almost anyone say, “Aw, poor guy!” But give Richie half a chance and he’ll prove that he’s not the sorry sort. In fact, he’s recovered and adjusted so incredibly well that he seems to have a sixth sense: joy.

Cat with FIV and dental disease comes to Best Friends

Richie was beginning to have health problems when he came to the Sanctuary a few years ago from the Community Animal Welfare Society (CAWS), a Best Friends Network partner. A test showed that he has feline immunodeficiency virus (FIV), which weakens a cat’s immune system and makes him more susceptible to secondary infections, including dental disease.

Without a mouth full of painful teeth, Richie began to eat like never before. In fact, he chowed down with such gusto that it wasn’t long before he earned a spot in the area of Cat World for cats who need to shed some weight.

Help for a cat with glaucoma

Richie settled into his little corner of Cat World, and got to know it well — something that would help with his next challenge. His mouth felt great and he had lost some weight, but then he developed glaucoma. It wasn’t long before his sight wasn’t so good anymore, and when Best Friends veterinarians felt that the pressure in his eyes was at a level that caused him pain, they brought him in for surgery to remove them.

While the vets helped Richie with all his medical needs after the surgery, his caregivers prepared him for what they anticipated would be a difficult adjustment to blindness. They made sure all the walkways in the building were kept clear and the furniture was in exactly the same place Richie had last seen it. They called to him when they entered the room or reached out to pet him so they wouldn’t startle him. They even built him a special staircase out of elevated cat beds so that he could climb up on a kitchen table where he liked to perch — and then get down again safely. 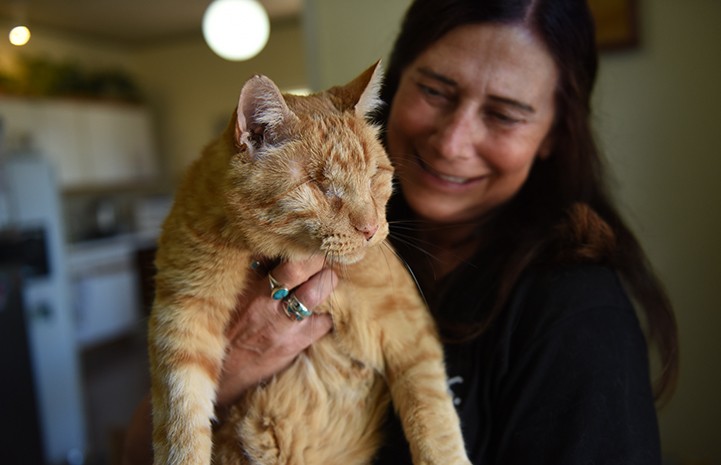 A cat who doesn’t act blind

Richie’s caregivers watched him carefully during his recovery, making sure he was getting around safely. They made sure that he could find the water fountain and everything else he needed. But to everyone’s amazement, Richie didn’t seem to need the extra help. His attitude seemed to be: “I’ve got this. Thank you very much.”

That’s never changed. Not only has Richie recovered like a superstar, but he can also climb, jump and navigate his way around the building as well as when he could see. “When he walks around, you can't tell he is blind,” says Katie Kyzivat, a team leader at Cat World.

Richie makes good use of his special staircase by walking right up to his favorite spot on the table, but instead of walking back down, he simply hops down and makes a perfect landing. “He’s amazing. He must have a third eye somewhere,” says caregiver Jodi Forsyth.

Jodi’s only half joking, since Richie can easily fool people into thinking he can see. For example, he has an amazing ability to know where his caregivers (and their food) are at all times.

“He can look you right in the face so that it seems like he can still see exactly where you are,” says Katie. If a caregiver is eating lunch at one of the break tables, Richie will jump up on the other one and gaze straight at the caregiver, as if he’s watching every move and begging for just one tantalizing bite.

Blind cat is an inspiration

The most striking example of Richie’s ability involves a laser pointer. One day, he was lying on his special staircase with his best cat buddy, Tango. When Katie took out a laser pointer, Tango turned to watch the bouncing laser beam. While that wasn’t unusual, Richie surprised everyone by also turning toward the light and following its movement with his head. While he may have been following the sound of the cat leaping after the laser, he managed to keep close track of it during the entire game.

Richie’s “sixth sense” might be his incredible ability to use his other senses to make up for his loss of sight. He’s practically a poster cat for not judging a book by its cover. And while he may look a little rough on the outside, he’s living proof that one can survive a life-changing setback and go on to live a life filled with joy. 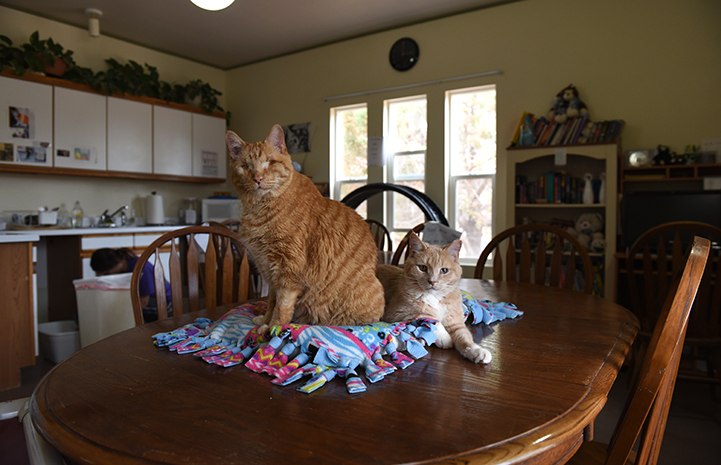