They’re here because without their mom, these seven babies needed some help reaching adolescence. But they can’t be held or petted; they’re only stopping by. We can’t let them get used to humans before they’re sent back out to live in the wild.

The bobcats were found in Moab, Utah. Some tenants were moving into their new place when – surprise! Wasn’t this place supposed to be empty? Somebody seemed to have beaten them to their rental. It was a bobcat and her seven babies.

As soon as the mother bobcat saw the people, she jumped out the window! The babies were left behind. The folks called local authorities, who then tried to lure the mom back to the babes, but with no luck. So what to do with the abandoned bob-kittens? Off to Best Friends!

Best Friends is state and federally licensed to rehabilitate baby and injured wildlife. So the babies were welcome to come here for care. But they are alone, in a place where they can’t see, touch, or even hear humans. That way, their natural instincts to run away from folks will stay intact when they head back to the wild.

And the prognosis so far is good! They’re creeping up on four weeks old, and getting stronger every day. 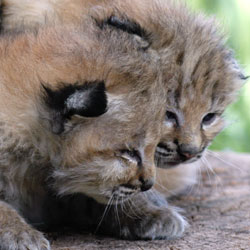