A boy and his cat

Image
A boy whose dream was to have a cat proves he is ready for the responsibility. He and his family adopt a senior cat positive for FIV.
By Nicole Hamilton 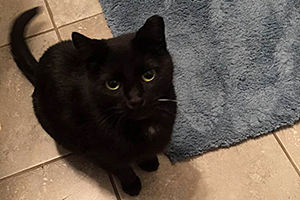 About a year ago, Landon Jeppsen decided he wanted a cat, but there were a couple of things standing in the way. For starters, age was not on Landon’s side. He was five years old at the time.

And then there was mom. Landon knew that somehow he’d have to convince her that he was ready to care for a cat. And he knew it wouldn’t be easy.

Still, Landon wasn’t going to give up on his dream, something he made quite clear to Santa as he sat on his lap back in 2015. “The only present he wanted was a cat,” says Landon’s mom, Catherine. “He told Santa he could keep all the others.”

That Christmas, Santa delivered Landon a stuffed animal cat and a challenge: If Landon could show his mom that he could take care of his new cat, he could get a real one the following year.

Over the next year, Landon made sure his stuffed cat was comfortable and safe, and he always knew where his cat was. He did a great job, proving to his mom that he was ready to adopt a real cat. So when Christmas 2016 came around, Landon and his mom paid a visit to the Best Friends Pet Adoption Center in Salt Lake City, Utah.

There, Landon would find the only present he had ever wanted, and a special cat would find a home with a young adopter who practiced all year to give her the love and care she deserves.

What is FIV? One more reason to give a cat a loving home 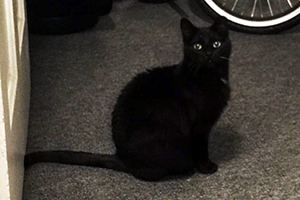 Eight-year-old Sugar Plum had been brought to a local municipal shelter as a stray before coming to the Best Friends Pet Adoption Center. When she arrived, the staff saw right away how gentle she is and how much she loves people — especially ones who rub her nose. In honor of her sweet personality, they named her Sugar Plum.

A medical exam showed that Sugar Plum has feline immunodeficiency virus (FIV), which means that, while she likely still has a healthy life ahead, her immune system isn’t as strong as cats without FIV.

“Some people are concerned that adopting cats with FIV means they’ll have to give them special medicine or that they have a lot of expensive vet visits, but these cats require neither of these things,” says Samantha Nelson, Best Friends–Utah adoptions coordinator. “Cats with FIV can still lead a very good, full life.”

The fact that Sugar Plum has FIV didn’t matter at all to Landon, who saw her as soon as he walked in the front door of the adoption center. Landon, who considers himself a wizard, was immediately drawn to Sugar Plum’s beautiful black coat. To him, she was pure magic. Still, he went around the center to see all the cats there, so he could pick the best one.

Landon had a big decision to make. He met so many cats that day. Was Sugar Plum really the one? And so he closed his eyes and thought real hard, and when he pictured himself with his cat, he saw Sugar Plum. 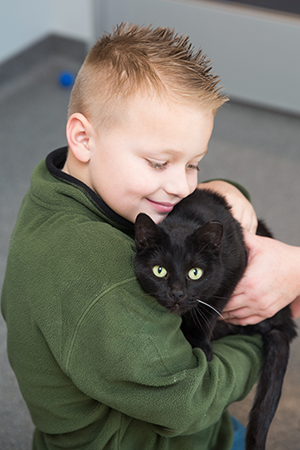 Today, Landon and Sugar Plum — who is now named Cleo — are becoming great friends. Landon loves that Cleo shares the same color eyes with him and his mom. “They get sharper when she’s nervous,” explains Landon. “And when she’s not nervous, they get bigger. She is so cool.”

Cleo is patiently teaching Landon how to take care of her. And Landon is learning that taking care of a real cat is a big responsibility. He has begun cleaning out her litter box, and is in charge of giving her food every morning.

Thanks to Cleo, Landon’s love for animals — especially cats — has only gotten stronger. In fact, Landon has a recommendation to all who are still living without a feline companion. “If you don’t have a cat, do yourself a favor and get a cat,” he advises. “They’re the best. And get a black cat, because they are cool.”