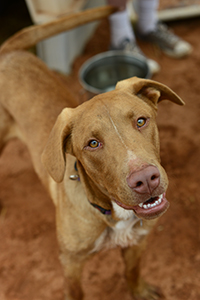 Since Eeyore was so young when he started showing nervous dog behavior (tensing up, tucking his tail under and dancing nervously at the end of his leash while trying to get as far away from new people as possible), Eeyore may have just been born with an anxiety disorder, or something may have frightened him and left a bad impression during a fear period in his puppyhood.

No one knows for certain when or how his anxiety took root. But what Eeyore’s caregivers did know was that his nervousness was keeping his world pretty small. While Eeyore quickly learned to trust his caregivers, not even the least little bit of that trust transferred to strangers. He wanted nothing to do with them. Whenever new people were around, poor Eeyore was a nervous wreck.

Dogtown caregivers began working to show Eeyore that new people meant good things. They started slowly by having someone Eeyore didn’t know stand a good distance away from him. Since Eeyore found eye contact uncomfortable, whenever the person so much as looked his way he would get a treat from his caregiver. Eeyore also practiced paying close attention to his caregivers whenever strangers were around. Gradually, he was able to sharpen his focus until he was no longer so distracted and disturbed by the mere presence of unfamiliar faces.

After a year of consistent training, Eeyore was doing better. He didn’t panic as much around new people. But his overall anxiety level hadn’t changed much. He was still a tense, nervous dog, and it showed. His relationships with other dogs — once really good— started to suffer. While previously he had always played nicely with doggy friends, he was beginning to get agitated around them.

It was a tough break for a dog known by caregivers to be friendly and social at heart. Eeyore didn’t want to live in a tiny world, but his anxiety had painted him into a corner. So his caregivers and trainers looked for another way to help him break free. Together with Dogtown managers and the Best Friends clinic, they decided to see if a canine anti-anxiety medication would help.

“A lot of people are hesitant to put dogs on behavior modification drugs,” says Dogtown behavior consultant Emily Strong. But, she explains, “The purpose of these medications isn't to sedate the dogs, change their personalities or act as a quick fix. It is meant to help balance their brain chemistry so they can have the best possible chance at success when provided with the same training and enrichment that all our dogs get.”

Eeyore would stick to the same training routine he’d always had at Dogtown. The medication would simply be another tool for fighting his anxiety. After a five-week trial period, Eeyore’s emotional health improved dramatically. “And his training progressed by leaps and bounds,” says Emily. Finally, Eeyore could use his training skills to cope with the world far more easily. 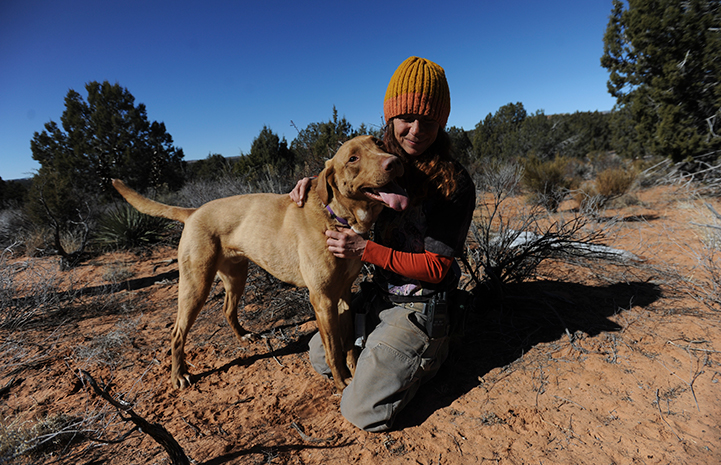 Now that Eeyore has lost his nervous edge and is calmer, happier and more confident, meeting people has become a breeze. His caregivers can leash him up and walk him out of the building and onto the trail, even with strangers nearby.

Today Eeyore genuinely enjoys people, especially because they always seem to have tasty treats. Now when he’s out on walks on the trails that run through Dogtown, he’ll eagerly approach strangers, knowing they’re likely to have a treat ready to give him. He’ll even offer a paw shake or a perfect sit in order to get one. And once he decides he likes someone, he’ll rub his head up against them, loving the contact.

In short, he’s a different dog than he was before. 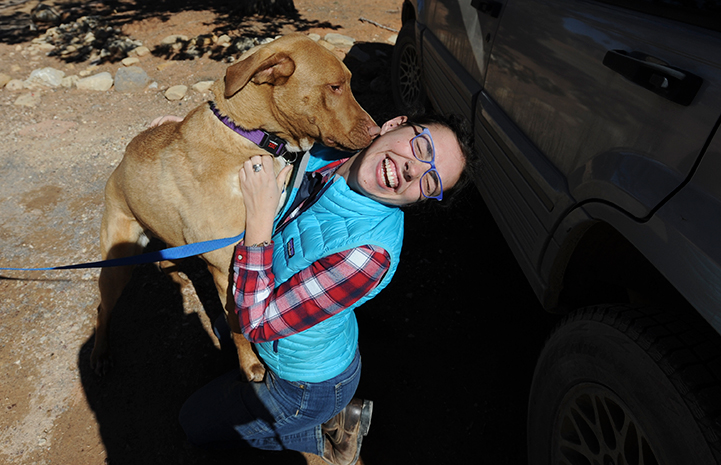 While Eeyore will continue his training as long as he lives in Dogtown (and then, ideally, when he goes to a forever home), he may not always need to take medication. But right now, it’s helping the sweet, sensitive dog thrive in areas where he once struggled. That means Eeyore gets to wake up every day feeling his best, and to spend his days far more confident, happy and upbeat than his namesake, Eeyore the donkey, ever was. 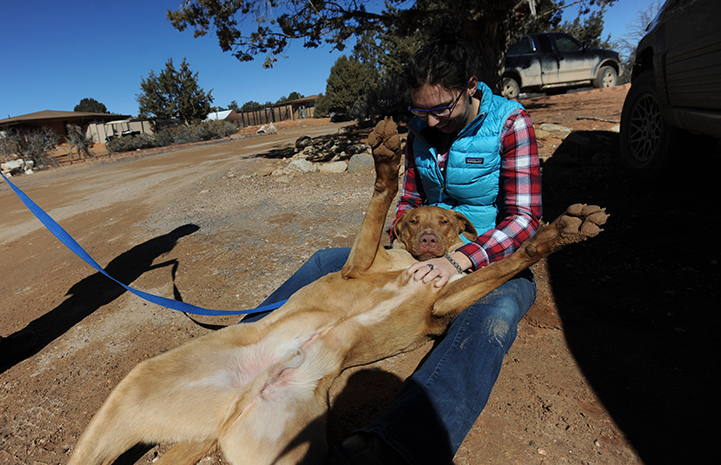