Image
California gull who wouldn't fly becomes a Best Friends educational bird. Read about why these birds are considered to be heroic in Utah.
By Sharon St. Joan

Finn the California gull has a very expressive face, and if you look at him, he will look back at you sideways.

A few weeks ago, the bird was standing in the middle of a highway, with cars zooming by. The vet tech who rescued him says, "Nobody (was) making much of an effort to avoid him." So she dashed out into the road and grabbed him, then took him to the vet she works with. 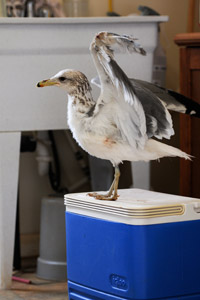 California gull not inclined to fly

The vet turned him over to Debby Pappas, a licensed wildlife rehabilitator in the Salt Lake area. Finn didn't really have any current injuries. He had an old injury, a fracture in one wing that had healed by itself some time before. He ought to be able to fly, and at first Debby planned to release him. But the only trouble was that he just didn't fly, so he wasn't releasable. Maybe his old wing injury had occurred just as he was learning to fly, and he just never quite got the hang of flying after that. He can get three or four feet off the ground and that's about it.

Carmen Smith, manager of Wild Friends and licensed wildlife rehabilitator, arranged with the U.S. Fish and Wildlife Service for a permit for him to be an educational bird at Best Friends. Finn will be starting his new career here as soon as he's settled in. He'll be meeting around 10,000 visitors to the Sanctuary every year.

The California gull, a hero in Utah

Since he's a California gull, you might think he ought to be in California. But, no, he's a hero in Utah. In 1848, when Utah was still a territory, and there was a plague of crickets destroying the crops, the pioneers felt that only a miracle could save them. Great flocks of gulls appeared in the sky, their cries filled the air, and they lighted on the fields. After spending several hours devouring the crickets, the gulls rose into the air and flew back to the Great Salt Lake. The remaining crops were saved, and the people survived. In 1955, in memory of this event, the California gull was named the official state bird of Utah. Seagull Monument, featuring two sculpted seagulls, stands in Temple Square in Salt Lake City.

As for Finn, he likes to eat everything. Gulls are omnivores. He likes his food so much he picks out bits to play with: leafy greens, fruits and veggies, maybe some kibble, or pasta and egg. 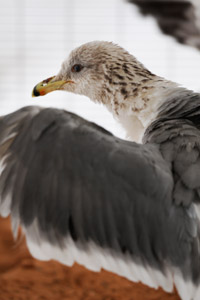 Gulls are supposed to float on water, but Finn doesn't really do that. He wades in the shallow water of his pool, or sometimes he stands next to it and leans over to wash his face and his wings. He also likes to stand on things and hold his wings up in the air. Pecking at his caregivers is fun too.

He arrived two weeks ago and has found a good friend, Gracie, one of the other educational birds, who is a Canada goose. They'll be next-door neighbors, and they both love water, so they have a common interest.

California gulls spend the winter on the West Coast and then fly inland to breed on lakes. They are, except for Finn, acrobatic fliers, often hovering gracefully on the wind.

How to help wildlife

Any bird that should be flying but isn't most likely needs help from a licensed wildlife rehabilitator. For help locating a rehabilitator near you, call Wild Friends at 435-644-2001, ext. 4460.