Image
Cat Adoption Team (CAT) in Sherwood, Oregon, which was founded by Evan Kalik, is a cat adoption agency and hospital.
By Barbara Williamson

Every cat and kitten who makes it through the doors of the Cat Adoption Team (CAT) comes in with a story and is given a promise: they will be safe, loved, cared for and every effort will be made to find the perfect home. 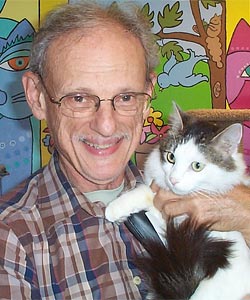 "We do everything for them except give them a college education and I’m trying to figure out how to do that," said Evan Kalik, the founder of CAT. "We take in cats that the shelters won’t. I always say, ‘Give me two weeks and I can get this cat well.’ It lights us up when one of our special needs cats go home. That’s mission accomplished.

"We take in sick cats, even if they have a fatal illness, we will make a hospice for them."

This Sherwood, Oregon, adoption agency/hospital opened its doors in 1998, and Evan estimates they have saved between 8,000 and 9,000 cats and kittens. Last year CAT found homes for 2,100 cats and kittens, of which about 1200 came from the counties, animal emergency hospitals and vet clinics, or other shelters.

One of the kitties to cross the doorstep of CAT recently was Sparky who had bitten an electric wire on a telephone pole. "He got zapped really good. We tried desperately to save his leg but it had to be amputated. But the vet fell in love with him and I think he has his home," Evan said.

Marilynn Considine, executive director, said CAT’s "on-site veterinary hospital allows us to provide top-flight medical care for all our cats from the time they arrive until they are placed into adoptive indoor-only homes. All of our cats are altered, vaccinated, tested for common diseases, treated for parasites, and given microchip identification prior to adoption.

"The hospital is what makes CAT especially unique: in recent weeks, in addition to Sparky, we performed surgery on a kitten (Milagro) nearly crushed in the fan belt of fork lift; a cat with intestinal intusception (Faydra); and orthopedic surgeries for two cats (Ray and Miller) who had been hit by cars.

"The great news is that these cats recover and go on to find great loving homes. We also find homes for [feline immunodeficiency] FIV-positive cats that go on to enjoy many healthy years with families that cherish them."

Quite a success story, especially considering the founder was a committed dog person until a cat totally stole his heart. After his first wife died of breast cancer, he remarried a couple of years later. His second wife brought an elderly cat with her, Jessy, who quickly became Evan’s cat. When Jessy died, he adopted a couple of kittens.

A successful businessman, Evan moved to Oregon in 1994. He made a deal with his sons: he would build them a 25,000-foot building for their fireplace business and there would be 3,000 square feet upstairs for CAT. The hospital was opened in 2002. Now retired, Evan still is very active in CAT although he says he has a great staff and volunteers.

CAT has a staff of 12 employees for the seven-day-a-week no-kill shelter and hospital.

CAT cares for approximately 500 cats and kittens at any one time. About 250 of them are onsite in the shelter; the remainder are housed in foster care or in one of five offsite retail adoption centers in Oregon. Every weekend there are adoption events and about 40 percent of the adoptions are done in the retail outreach centers.

When asked how other groups can copy CAT’s success, Evan asked a question back, "How hard do you want to work? You work hard; this is work of the heart.

"But I always say I don’t know of another profession where you get to save lives seven days of the week.

"There is no altruism in what I do, or what my staff and volunteers do. We do it because it makes us feel so good."

To learn more about CAT, visit their website at catadoptionteam.org.