Image
Injured cat, maybe as a result of a car fan belt or farm machinery, has reconstructive surgeries, recovers, and then learns to enjoy agility training.
By Christelle L. Del Prete

How does a one-eyed cat master an agility course in Cat World? The path was a long one for Orson, who was found on the side of a road in Maryland. He was severely injured and walking in circles in the rain. Luckily, the person who found him worked at a veterinary clinic and took him in for immediate treatment. No one knows for sure what happened to Orson, though it is likely that his grievous facial wounds were the result of getting caught in the fan belt of a car or in farm machinery. 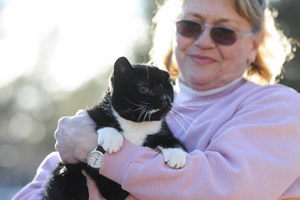 While he was going through some reconstructive surgeries, he lived in the vet's office and greeted all of the clients. But it was clear that Orson couldn't stay there; the clinic had become a dangerous place that he couldn't navigate safely as he was essentially blind in his remaining eye, and he had no fear of dogs.

So the special-needs cat came to Best Friends to continue healing. Robin Jackson, a team leader in Cat World, explains that, in addition to a missing eye, half his nose was gone, as well as one of his ears. The pupil of his remaining eye was misshapen, and, in order to stay pain-free and perhaps regain a little bit of vision, he required several different eye drops several times a day. Additionally, he was having trouble grooming himself, so his fur looked unkempt, and he was about five pounds overweight.

But Orson's spirit prevailed. Though he'd been traumatized and scarred by his injuries, he adapted very quickly to his new environment. It wasn't long before he became a staff favorite in Sinjin's, a building in Cat World for cats who are working to lose weight. But Robin said that Orson really wanted to be outside; he would often stand by the door and meow to be let out. Once in the sandy yard behind Sinjin's, Orson felt his way around until he became familiar with the space. Still, his caregivers set him up in a screened kitty "tent," so that he could enjoy the outdoors without getting lost or injured. 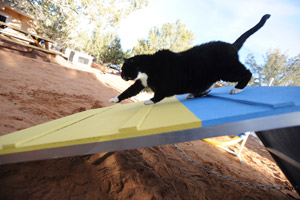 Orson's caregivers could have left it at that. But they saw some hidden potential, and they suspected that he could see shadows. So they decided to get him onto the agility course. At first, Orson didn't quite get the idea. Caregiver Larry Casale had to lure him up to the top of the equipment with kibble and then carry him down again when it was clear that Orson wasn't going to climb down himself.

But eventually he got the hang of it, and while he may not have set any records for speed, just conquering the agility course was an impressive feat considering his limitations. But all that exercise wasn't just for show; it also contributed to his weight loss and overall physical health. He lost four pounds. His jet black fur became sleek and glossy. And, best of all, Orson got adopted.

Now, he's got a new name (Remington) and a whole new life. He loves to sit on his new mom's lap and purr. He's being introduced successfully to the other cats in the household. And, he continues to impress everyone he meets with his sweet personality.

From injured and alone to a loving new home, Orson has come full circle.

If you're looking for your next pet, check out the adoptable pets at the Sanctuary.