Image
Tabby cat with severe cerebellar hypoplasia (CH) is adopted by a family committed to giving him a happy and comfortable life.
By Christelle L. Del Prete 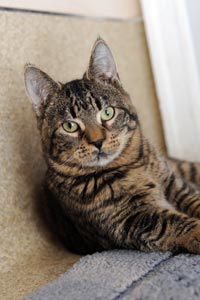 Cotton, an adorable gray tabby cat, won everyone’s heart during his time at Best Friends Animal Sanctuary. That’s because the super-sweet kitten never gave up, even though he had to work harder at life than other cats. Cotton came to Best Friends from a rescue organization where he was having a hard time finding the special home he needed. Cotton has cerebellar hypoplasia (CH), a neurological condition that affects motor skills, making him unable to walk and move around normally.

Some cats with CH are just a little wobbly on their feet, but Cotton has a severe case. He does most things lying down, like eating and using the litter box. When he was first learning how to navigate the world, things sometimes got a bit messy, and he had to rely on people to help him. But that only made him more lovable, not less. He became quite popular in Cat World during the six months he spent there.

Every day is a good day

That’s because Cotton was always happy and never seemed to have a bad day. He’d pull his wobbly little body across the room, using rubber-backed throw rugs his caregivers placed down to help him get a good grip. When he got tired, he’d curl up in his deep, round bed, and purr and knead himself to sleep. It was his favorite place aside from his caregivers’ arms.

He formed a special bond with caregiver Cassie Rowell, who often held him like a baby. Sometimes Cassie would bring him to the window, so he could wave to people on the Sanctuary tours, or out to the “catio” (a screened-in patio for cats) when it snowed, because he loved to sniff the softly falling flakes.

Adopting a cat with CH

But as good as his life was in Cat World, Cotton deserved a special home of his own. And recently he got exactly that. Louise Green was visiting the Sanctuary with her partner, Regina. During that vacation, a celebration of Regina’s birthday and a dream vacation, the couple took several Sanctuary pets for sleepovers. Cotton was one of them. He quickly worked his magic on their hearts and they knew they wanted to bring him home. “Certain animals just grab you, and you know,” Louise says.

She and Regina spent months setting up their home for Cotton’s arrival. They wanted to make sure he’d be safe and that he could get around their house with relative ease. That turned out to be no problem for Cotton. “We didn't realize how able he really is. He moves extremely well in his own way,” Louise says. “He’s taken over the house, and can zoom around. He’ll fly across the room to sit by your hip and put his head on your lap.” 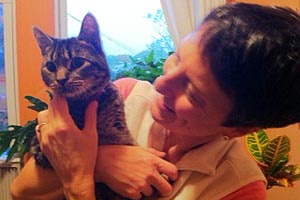 The affectionate little tabby has changed their lives in some pretty significant ways. “We had to slow down a lot with Cotton, take our time with him, reassure him, learn his habits and learn his language — all of his different kinds of cries,” says Louise, adding that getting to know Cotton has “much the same benefit that you get when you come here to the Sanctuary.”

While Cotton’s new family loves him for exactly who and how he is, and continue working to understand and strengthen their bond with him, they are thrilled over his recent improvements. In the past month, Cotton has been balancing on all four of his legs more often. Sometimes, he can even launch himself off a piece of furniture and land on all four feet. One thing’s for sure: Cotton has landed himself in his perfect home.

To help more animals like Cotton go from homeless to home, become a Best Friends member.