Image
Feline food puzzles have helped a cat with FIV. Playing with food puzzles encourages him to eat more and keeps his mind active.
By Christelle L. Del Prete

Cats have a different idea of how to have fun with puzzles than people do. Putting the pieces together? Boring. Batting them onto the floor? Awesome.

But there’s another kind of puzzle made just for pets: food puzzles. They’re not only fun, they can help keep pets healthy, too. And Eli, a nine-year-old cat at Best Friends Animal Sanctuary, has taken his love of puzzles to a new level. In fact, he’s become somewhat of a fanatic.

More important, food puzzles are helping Eli with his appetite, because until he was encouraged to play with his food, he wasn’t too interested in eating. 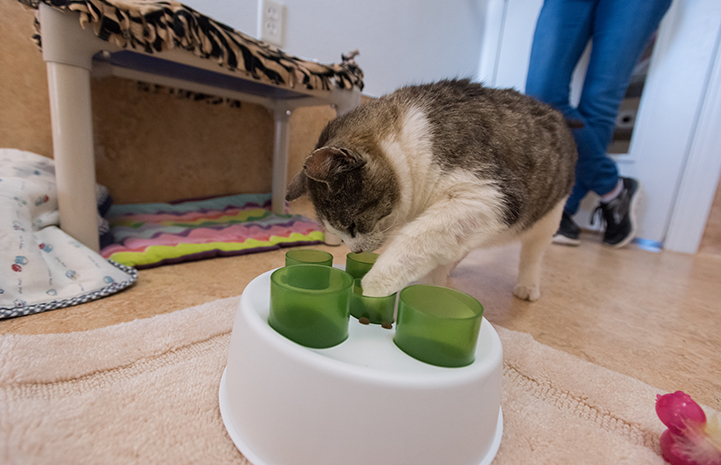 Food puzzles are often used at the Sanctuary, because they help animals stay busy and entertained by giving them a job to do: play fun games, and get rewarded with food. They’re especially great for animals who get bored easily. These toys also work for pets who tend to “inhale” their food, since they get them to slow down by doling out the food in small portions, instead of all at once.

Food puzzles can also help pets who just aren’t all that excited about mealtimes by giving them extra motivation to chow down. If you had to place Eli into a category, he’d fall into that last one.

Eli could use the extra motivation, too, because eating hasn’t always been fun for him.

Eli has feline immunodeficiency virus (FIV), a condition that weakens his immune system and makes him more susceptible to secondary infections and dental disease. With regular veterinary checkups, Eli has been staying pretty healthy.

He does get help for stomatitis, an inflammation of his mouth and gums, which causes painful mouth ulcers. Along with the dental work he’s had at the Sanctuary, medication helps to keep Eli comfortable. But it sure doesn’t hurt to add a little magic to his mealtimes.

And now Eli has become obsessed. He finds it far more exciting to bat little plastic fish around or to dig his food out of little pockets rather than simply eating it out of a boring old bowl.

So he now takes all of his meals via food puzzles. A blue plastic one with brightly colored plastic fish is his favorite, though his caregivers often switch up the puzzles to keep Eli on his toes. But even though Eli eagerly awaits his food puzzle each morning, his interest in puzzles extends far beyond breakfast. 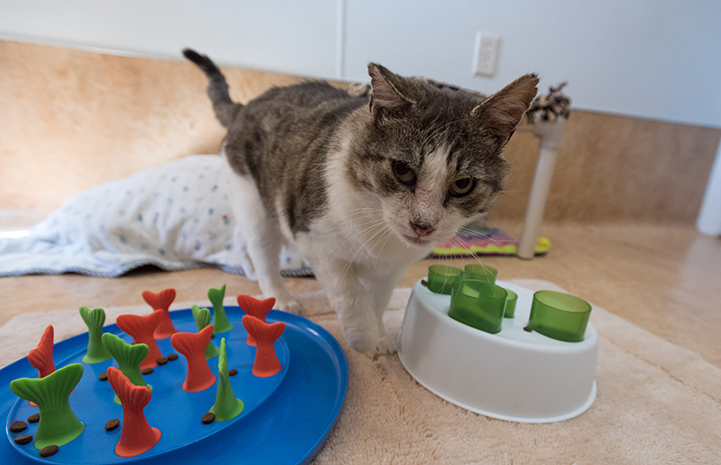 Now, Eli not only has a renewed interest in breakfast and dinner, he also has a new passion. He loves his puzzles so much that he never goes anywhere without them. When he goes on sleepovers with volunteers, his food puzzles go with him so that he can eat his dinner and breakfast from them.

Giving a cat food puzzles may seem like a simple thing — like handing out crinkly balls or toy mice. For Eli, though, they’ve been life-changing. “Have food puzzle, will travel” is his new motto. Because for this puzzle fanatic, mealtimes went from being kind of a pain to the highlights of his day. 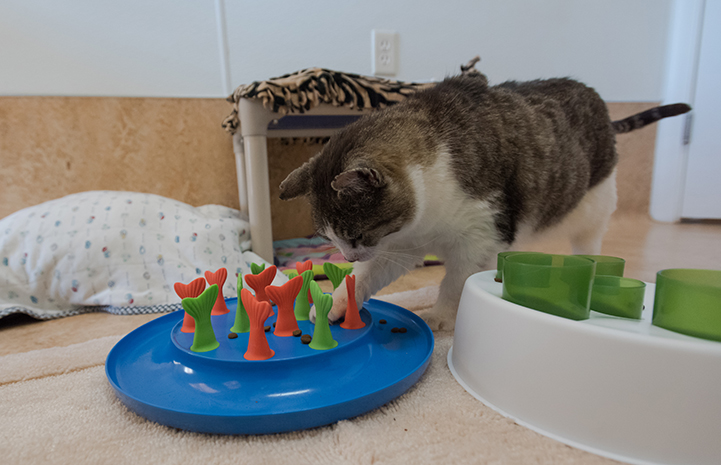