Cat with a happy heart

Image
Cat with heart disease (hypertrophic cardiomyopathy, causing a thickening of his heart walls) is receiving medical treatment and TLC at the Sanctuary.
By Christelle L. Del Prete

​Kennedy isn’t the kind of cat who waits patiently in a corner for someone to notice him. He’s one of the friendliest cats at the Sanctuary, and he looks perfectly normal when he’s rubbing against your legs, jumping in your lap or reaching up with his front paws, asking to be picked up. He doesn’t look his age, which is 12. His pure white fur is smooth and silky and his green eyes are clear.

What you can’t see by looking at Kennedy is that he’s got a medical condition that could limit his time with us. That’s why it’s especially good that he’s making the most of every day doing what he loves most: making new friends with everyone he meets.

Happiness for a senior cat with hypertrophic cardiomyopathy

Sweet, friendly Kennedy has a heart problem that is serious enough to stop him in his tracks. This heart disease (called hypertrophic cardiomyopathy) is a thickening of the heart walls, which affects the heart’s ability to bring in blood and effectively pump it out. Though he’s on several medications to help keep him as stable as possible, there is no cure for Kennedy’s condition, and it’s impossible to know how much time he has left.

Ever since the senior cat came to the Sanctuary after being abandoned, his past — just like his future — is unclear. There’s no question, however, that his present is pretty grand. He’s having fun and bringing lots of joy to people on Sanctuary tours.

Kennedy lives in the lobby in one of the buildings in Cat World, which is the perfect spot for such a friendly and outgoing cat. He’s taken on the role of official greeter for all the tours that roll through Cat World.

Kennedy loves being the first cat to greet visitors, give them friendly head butts or sniff and roll on their shoes. You could say he has a bit of a shoe fetish. If given half a chance, he’ll jump in someone’s lap and cuddle for the entire time the tour group is in the building. Being so irresistible, Kennedy has great success convincing visitors to hang out in the lobby with him rather than checking out the other cat rooms. 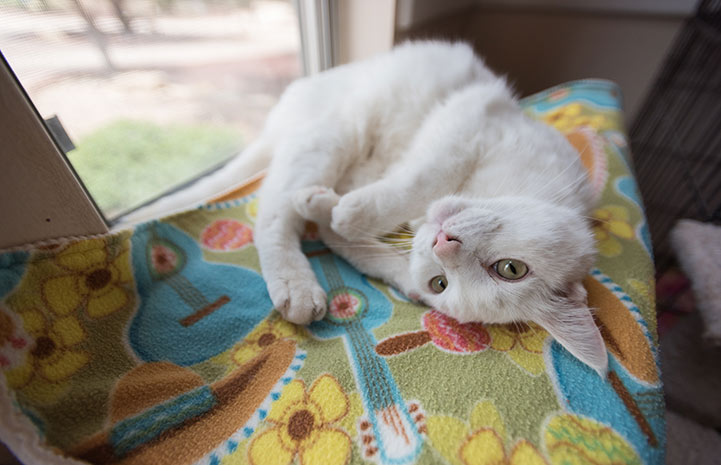 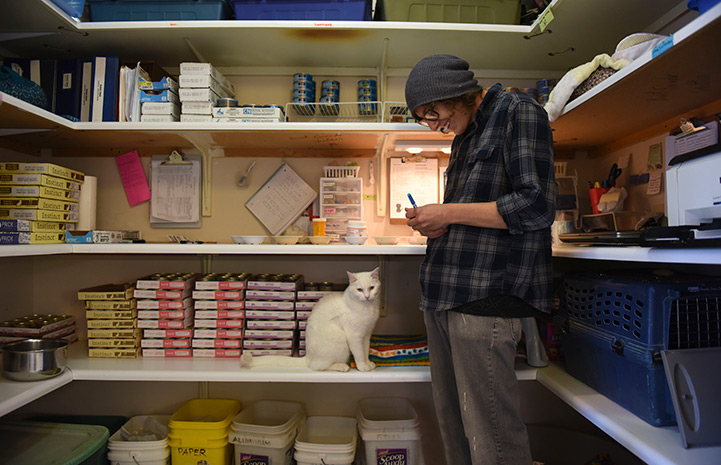 The center of attention

While tour times may be Kennedy’s favorite times of the day, mealtimes are a close second. “He's a food monger,” says caregiver Janet Wilde. “He’s always jumping up on the counters to try to find food, and every time we prep food or meds he's right there in the middle of everything.”

Kennedy also enjoys the going on leisurely stroller rides with Cat World volunteers or lounging in his fish-shaped, hidey-hole bed. Visit him there and he’ll roll over sleepily and let you reach in and pet his belly, before coming out to greet you and charming his way into your arms. 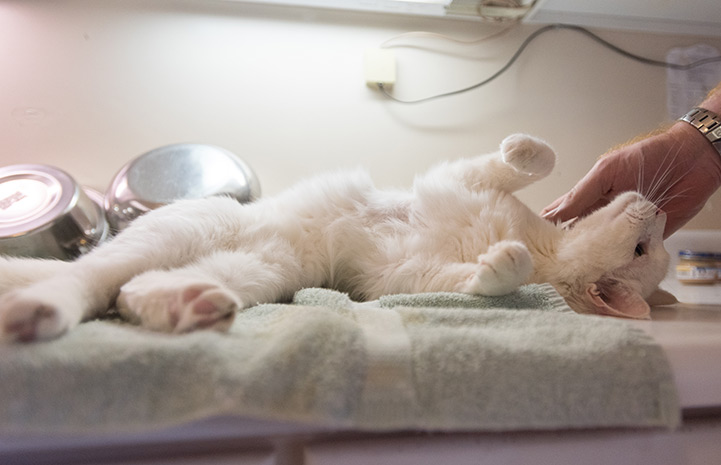 Happy moments for a once-abandoned cat

As if all that wasn’t enough to keep Kennedy happy and busy every day, sometimes he’s also a hat model. Caregiver Susan Szarwark crochets unique and colorful cat hats to sell for Strut Your Mutt, Best Friends’ annual fundraising dog walk. Each time she makes a new creation, Kennedy tries it on first. Though it’s not quite clear whether Kennedy truly enjoys wearing cute headgear or if he just likes all the extra attention while “modeling,” he’s thrilled to be the center of attention and have people ooh and aah over him.

For a once-abandoned cat, these are the happiest moments. Because in spite of anything that’s happened in his past or what the future may bring, Kennedy is fully experiencing what it’s like to be loved. 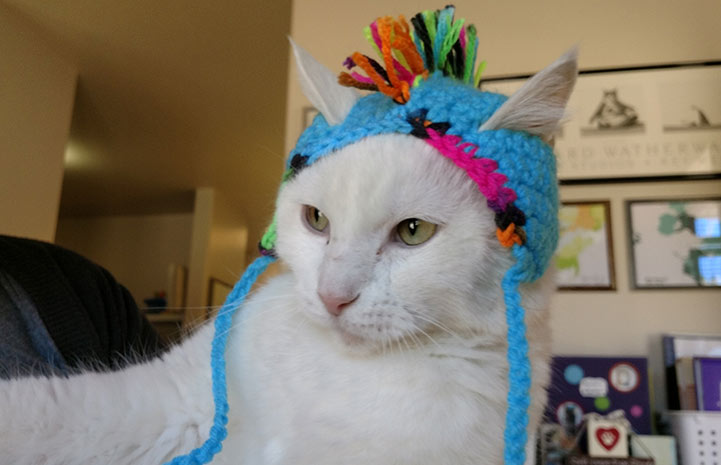