This cat might be a bit wobbly, but her mom doesn’t mind one bit

Image
Cat, rescued after being abandoned in a NYC building, has wobbly cat syndrome (cerebellar hypoplasia or CH), but she is now living a good life.
By Nicole Hamilton

A young cat named Tzipi lives in a home best described as cozy and comfortable. But at one time, the four walls surrounding her weren’t so inviting. She and her two siblings were found abandoned in a New York City building and then brought to Animal Care Centers of NYC, the New York City municipal shelter also known as ACC. It was clear from her wobbly head that she likely had a neurological condition known as feline cerebellar hypoplasia (CH), sometimes called wobbly cat syndrome.

From ACC, the sweet, fluffy tortoiseshell went to the Best Friends Pet Adoption Center in New York, where the vet team reached two conclusions. First, Tzipi indeed had a mild form of CH. And second, she’d be just fine. Despite her sweet and gentle demeanor, it was clear she was tough. She’d made it through a rough beginning (fending for herself in a vacant building) and now she was more than ready for a loving home. 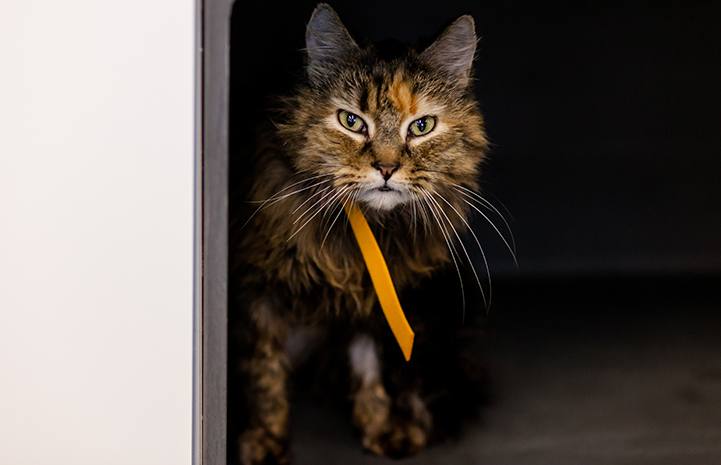 Adopting a cat with cerebellar hypoplasia

“Besides a mild form of CH, she had fleas and other minor issues,” says Suzanne Remito, pet adoption center adoption specialist. “But we all fell in love with her here. She was so sweet.”

Soon after they are born, cats usually show signs of CH. Mild signs might just be a wobbly walk and head (as with Tzipi), but a more extreme case can affect motor skills, causing a cat to be unsteady afoot or have difficulty using the litter box or eating.

At the pet adoption center, Tzipi showed everyone that she could get around just fine. The ideal adopter would be someone who wasn’t intimidated by her condition and understood it enough to make sure she had everything needed to feel comfortable in her new home.

“We knew it could take some time for her to get adopted,” says Suzanne. “But I always say the perfect adopter is just around the corner. You may have to wait for them, but eventually they show up.” 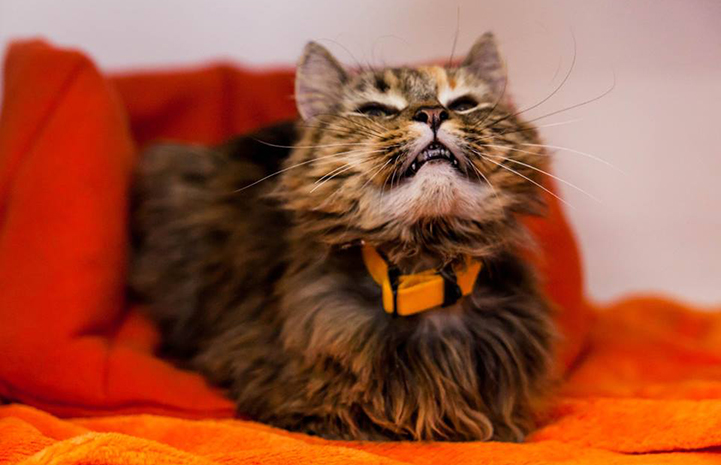 An adopter does her homework

Joanna Solomon had spent most of her life with older cats, but after her beloved senior cat, Serena, passed way she decided to adopt a younger cat. It was a done deal when she saw Tzipi’s face among the other adoptable pets on the Best Friends in New York website. “It made me smile,” says Joanna.

A few days later, Joanna turned the corner on West Broadway in SoHo and walked into the pet adoption center looking for Tzipi. And when she saw her, she had the same reaction: She smiled.

Joanna spent a lot of time getting to know Tzipi that day. Intrigued, but certainly not dissuaded by her condition, Joanna decided to do some homework before bringing Tzipi home. A return trip would be necessary anyway, so that her father (who she lives with) could meet Tzipi.

Joanna read up on CH and had a good talk with Dr. Allison Bliss, the center’s veterinarian. All that was left to do was have her dad meet the potential new feline of the house. It’s hard to resist a face like Tzipi’s, so when they returned to the center, Joanna’s father gave his blessing. And with that, Tzipi’s life turned its own big corner. She was finally going home. 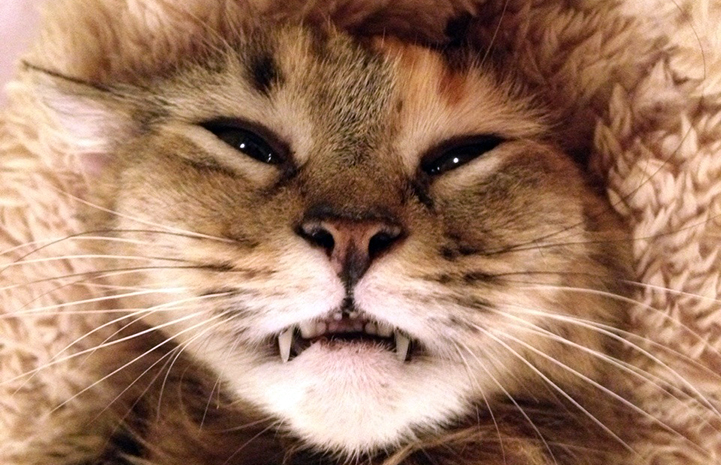 A lesson in feline strength 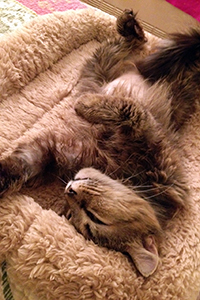 “She’s tiny but mighty,” says Joanna. Tzipi’s head wobbles occasionally or she walks with a sideways gait. But on most days, her neurological condition is very hard to spot.

Joanna’s dog Rummy is on a campaign to win her feline sister’s attention, but the little cat prefers to keep a kind but firm distance; however, Tzipi enjoys cuddling up next to Joanna’s dad while he watches television and playing with any toy Joanna gives her.

To make things easy in case the cat needs a little help, Joanna added a ramp in the kitchen to make it easier to get to her food on the counter. But most of the time she doesn’t need any help at all.

“She’s so small and so sweet, but she has been through so much,” says Joanna. “She handles it all so well. She’s taught me a lot about being strong.”